Former Defense Minister Amir Peretz is by no means a new face in the Labor Party, but his integrity could help him win the party’s leadership. 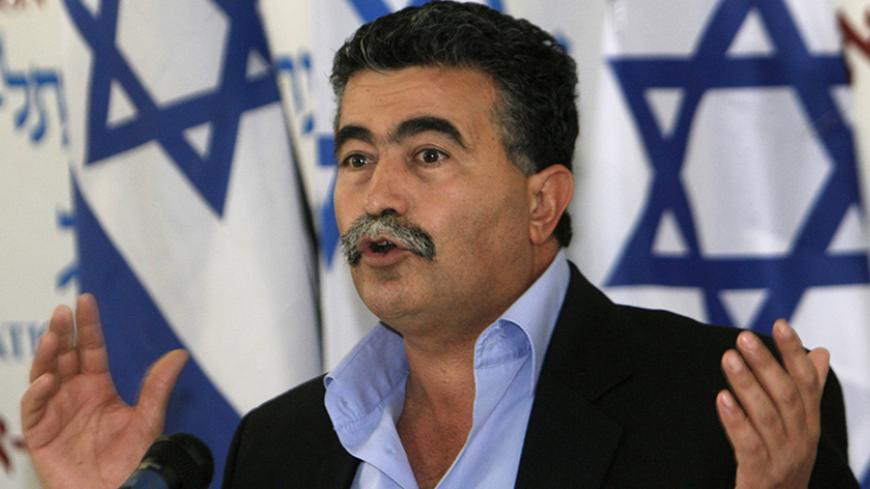 The Dec. 19 press conference announcement of Knesset member Amir Peretz's candidacy to head the Labor Party was expected. His sharp barbs about Prime Minister Benjamin Netanyahu leading Israeli society in a discourse of division and hate that could cause civil war were also familiar. The same can be said of his promise that as Labor's leader, he will bring about a “healing of the divisions” and as a prime minister promote a “policy of social justice while striving for a diplomatic agreement and peace.”

Although everything Peretz said was expected and familiar, the former defense minister nonetheless succeeded in piquing interest and bringing some relevance to a party that has been fading since the March 2015 elections and whose voters are abandoning its sinking ship at a worrying pace. The primary reasons for the interest in Peretz are that despite the desperate state of the party, there is still someone interested in heading its struggling platform, and that Peretz is the first to formally announce that he is entering the race. In addition, in May, Netanyahu’s fourth government will mark two years in power, a point in the political cycle that naturally turns attention to the next election and generates political hysteria.

The other potential candidates for party chair warming up on the sidelines are Knesset members Erel Margalit and Omer Bar Lev and the current chair, Isaac Herzog, who for months has been in a Sisyphean battle for survival. Of the four, Peretz is the most senior, veteran politician. At 64, and a grandfather, this would be his fourth time running to lead Labor. His resume shows one big and surprising victory over the late Shimon Peres, in November 2005, and two honorable losses, in 2007 to Ehud Barak and in 2011 to Shelly Yachimovich. To Peretz's detriment are the two times he left Labor for another party, before returning home both times, and of course his painful political collapse driven by criticism of his leadership of the 2006 Lebanon war.

Thus, although Peretz is not “new blood” and in many respects is a well-tread political figure, he succeeded in reviving a little bit of hope in the battered left in announcing his candidacy. It may be that Israel is at a point where so many parts of the political establishment, foremost Yesh Atid Chair Yair Lapid, are moving right, that the fact that Peretz is not winking at the right — neither in his rhetoric nor by means of vague diplomatic messages — makes him an interesting and refreshing candidate.

Peretz also comes with a stamp of ideological integrity: He has been known to the Israeli public for four decades, has proven his loyalty to a left-wing diplomatic agenda, the basis of which is a division of the land, and has a clear social-democratic economic worldview, which he implemented in the various posts he has held.

The big question is whether Peretz, as he proclaimed at the press conference, is indeed the only candidate who can bring new voters to his party, and whether before he does so, he can succeed in a sweep of Labor Party members in a race expected to take place in another six months.

It is hard to estimate Peretz’s chances for victory at this early moment, but based on past experience, one can say that he has a big advantage over his rivals in building a campaign, in doing the systematic work of building a camp, in his diligence and in recruiting activists.

In addition, as seen at the press conference, Peretz has chosen to run a campaign with zero invective toward Herzog — as opposed to Margalit, who grossly insults him at every opportunity — while attacking Netanyahu and stinging Lapid. Rightly, Peretz directs his fire outside his political home.

Above all, Peretz will undoubtedly try to build on his success in the 2006 election, when he led the party to 19 mandates. Analyses and breakdowns by leading pollsters after that election pointed to the amazing fact that the left-wing Peretz succeeded in bringing six mandates to Labor from Likud in its development (periphery) town strongholds, most of them of Mizrahi (Middle Eastern) origin. Alongside that victory in transferring mandates from bloc to bloc, about six mandates from the so-called white tribe (of European origins) left the party. They had a hard time accepting Peretz’s leadership, possibly because of his Mizrahi background, and instead went with Peres to the then-new Kadima Party. Absent their defection, Peretz could have become the first Mizrahi prime minister in the history of the State of Israel.

Peretz's effort to re-create the success of 2006 will be under much more adverse circumstances. Assuming that he wins, the party he will inherit is at the lowest point in its history and requires a lengthy rehabilitation. In addition, Peretz's agenda is not the bon ton among the Israeli public. In recent years, Israelis have felt alienated from anything tied to negotiations with the Palestinians. The results of the US elections and incoming Donald Trump administration, which looks to be pro-Israel, could further reinforce the prevailing anti-Palestinian mood.

Moreover, Peretz would not be alone in the field in an attempt to pick off mandates from the Likud. Since the 2015 elections, Lapid has been working diligently in the soft-right strongholds of the development towns, and he will be the rival of whoever is elected to head Labor. Lapid is considered an alternative to Netanyahu and the Likud in any poll or political analysis. He stands at the head of a well-oiled party machine with plenty of financial resources and is the person who emptied Labor of voters even though his political agenda leans right.

Peretz understands this and at his press conference delivered an initial sting to Lapid, suggesting that he “learn his place and be more modest.” Polls have a great fragrance, but one should only sniff them, not swallow them, Peretz advised Lapid.

The combination on the center-left of Lapid heading Yesh Atid and Peretz leading Labor could create an interesting and vigorous race that undercuts Likud’s hegemony and worries Netanyahu. Assuming that Peretz can still pinch mandates from Likud's strongholds, and Lapid remains the natural political home of white tribe members, who constitute the majority of center-left voters, there is the potential the general election will be a tiebreaker between the right-wing and center-left blocs.