Iraq is facing serious environmental challenges that require money, know-how and an attitude of urgency. 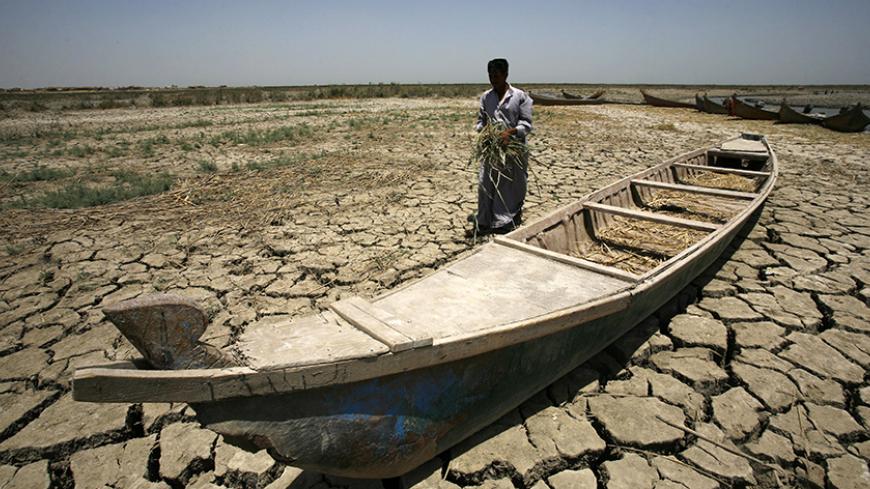 An Iraqi man walks past a boat sitting on dry, cracked earth in the Chibayish marshes near Nasiriyah, Iraq, June 25, 2015. - HAIDAR HAMDANI/AFP/Getty Images

BAGHDAD — Iraq faces many threats to its environment, not the least of which are apathy, a lack of education and a need for cooperation from other countries.

“Iraq is in dire need of environmental awareness. Environmental education is absent among the Iraqi people, whose dangerous behaviors are majorly affecting the environment," Nader Abdallah, a professor of environmental studies at the University of Babylon, told Al-Monitor.

Iraqi environmentalist Ibrahim Ramzi also noted how the bad behavior of citizens and businesses adds to the problem of pollution. He referred Al-Monitor to an article he wrote in January in which he noted "the disastrous levels of pollution in Iraq’s rivers, resulting from the deadly sewage flowing into the water and waste piling up on their banks.”

Al-Monitor took a tour around the banks of Shatt al-Hilla in Babil province, only to find that the river had been turned into a landfill for household and industrial waste.

A lack of water is at the center of many of Iraq's problems. Iraqi Minister of Health and Environment Adila Hammoud headed a meeting Nov. 30 with a group of environmentalists and academics to address the serious dangers that threaten Iraq’s marshes, which could lead to the death of their aquatic ecosystems.

Another effect of climate change is the drought of water bodies in southern Iraq, an area of over 16,000 square kilometers (6,177 square miles). The province of Basra, which had become known as the Venice of the Middle East, suffers from drought in its water channels.

Ahmed Abd, a biology professor at the University of Qadisiyah, told Al-Monitor that while drought contributes to the problem, as does global warming, there is only so much Iraq can do about either. The country signed the Paris Agreement on climate change in December 2015, pledging to reduce greenhouse gas emissions by 15% between 2020 and 2035, the equivalent of 90 million tons of carbon dioxide.

However, "The country does not have such a large number of industrial facilities or power plants, as is the case in industrialized countries, and the rates of fuel combustion in Iraq are much less than those of said countries,” he said.

Still, Abd added, "Iraq needs to focus on reducing the high temperatures, because of the drought that hit many regions, and it should demand foreign countries to pressure Turkey and Syria into amending their unfair policies toward Iraq’s water.”

The policies Abd is referring to are the dozens of dams set up by Turkey on the Euphrates River and its tributaries, which led to a clear water scarcity in the river, threatening agriculture as well as fisheries, and resulted in an Iraqi water deficit of about 23 billion cubic meters (6 trillion gallons) annually. In addition, Syria has established dams on the Euphrates River, reducing Iraq’s share of the water.

Amer Habib, a professor and researcher in agricultural sciences working for the Ministry of Agriculture, spoke with Al-Monitor about another serious problem: silt and sediment buildup in the Tigris and Euphrates rivers and their main tributaries. Habib said a lack of regular dredging has also increased the sediment in Shatt al-Arab (River of the Arabs) in southern Iraq, formed by the convergence of the Tigris and Euphrates.

Habib also pointed to a deadly, but less-often-cited, environmental danger. “The most important climate change factors in Iraq are the wars, which Iraq should address at climate conferences and urge the countries that took part in those wars, particularly the United States and United Kingdom, to help Iraq in terms of experience and techniques, and even financially, to save it from the devastating environmental effects caused by military vehicles, battles and the remnants of destructive weapons.”

A British inquiry revealed by The Guardian on Aug. 22, 2015, corroborates Habib’s point of view, noting that some of the climatic change taking place in Iraq has been caused by more than three decades of war, starting with the Iran-Iraq War in 1980, the Iraqi invasion of Kuwait in 1990 and the war to topple Saddam Hussein's regime in 2003.

Speaking to Al-Monitor, Siham Moussa, a member of the Health Committee in the Iraqi parliament, encouraged educational events that stress the importance of a clean environment, such as one held April 24 in Baghdad by the Green Climate Organization.

“Iraq's participation in the climate conferences in Paris and Marrakech allows us to learn from the experiences of developed countries with environment-friendly economic and industrial systems,” she said. "Oil refineries, power and telephones towers, as well as industrial waste and the remnants of war are all negative factors that contribute to climate change in Iraq.”

Meanwhile, Iraq's government and citizens seem barely concerned with climate change. This makes it imperative for the government to include the cost for climate change solutions in government spending, particularly since it has not made financial allocations in its budgets to solve environmental issues since 2003.