After three years, Iranian President Hassan Rouhani has unveiled one of his most important campaign promises — but his Citizens' Rights Charter has not escaped criticism. 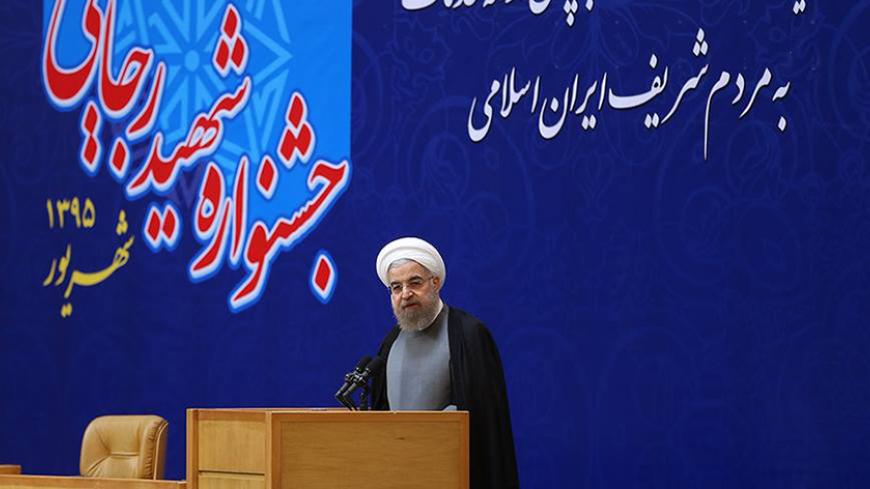 Iranian President Hassan Rouhani addresses the crowd at the end of the Shahid Rajai Festival in Tehran, Iran, Aug. 29, 2016. - Facebook/Pres.Rouhani

On Dec. 19, Iran’s moderate president Hassan Rouhani fulfilled one of his most important electoral promises: the formation and declaration of a Citizens’ Rights Charter.

The charter, which has 120 articles, emphasizes the right to a “decent life” — including the rights to freedom of speech, access to information, health services, a clean environment, holding rallies and clean water.

Expressing his pleasure over the move, Rouhani said Dec. 19, "I have stood by my promises regarding youth, women, and religious and ethnic minorities.” He also described the charter as a great step toward implementing the constitution and said, “The government was committed to implementing the rule of law from its first day in office. The Charter on Citizens’ Rights is the result of opinions taken from lawyers, experts and the public, and has the potential to evolve.” Rouhani continued, “No one [individual], no group and no media is exempt from the law. Everybody has equal rights before the law and it recognizes no 'favorites.'”

In reaction to the unveiling of the charter, conservative and hard-line newspapers slammed Rouhani, and demanded that the president’s attention rather be focused on the people’s economic situation.

Sobh-e-No daily, which is close to conservative Tehran Mayor Mohammad Bagher Ghalibaf, wrote Dec. 20, “While Rouhani considers the Citizens’ Rights charter as one of his fulfilled [campaign] promises, taking a look at the actual lives of people shows that their priorities are summed up in the two categories of their livelihoods and the economy. In fact, what is the concern of most people in Iran and what they refer to as their top demands and priorities are economic issues, unemployment, employment, livelihoods, income, and so on and so forth.”

Adopting the same line of thought as Sobh-e-No, the hard-line Kayhan newspaper — known as the mouthpiece of ultra-conservatives — wrote in its Dec. 20 edition, “Rouhani’s statement about civil rights as well as the favorites’ [issues] is very far from the administration’s behavior [in practice]. While some of the governmental managers receive very high salaries and citizens are suffering from unemployment, and while many don’t have an appropriate house and some others are living in their billion-[toman] houses and mansions, talking about civil rights is close to joking.”

Unlike conservatives, Reformist and moderate dailies unanimously welcomed the Citizens’ Rights Charter — but expressed concern about whether it will actually be enforced.

On Dec. 20, the Reformist Shargh daily asked, “What is the legal nature of this document? In other words, is the Citizens’ Rights Charter [considered to be] among the government-approved bills which are binding? … We can’t give a positive answer to this question; this document is definitely not a law.”

Meanwhile, the hard-line Javan newspaper touched on the same issue, arguing in an article Dec. 20, “It was seen in the news that the Citizens’ Rights Charter has been unveiled following [many] hours of work by experts and taking [into account the] opinions of law professors. Unfortunately, it should be said that this so-called legal text is far [removed] from basic legal matters. The major problem of this text … is that the executive branch has taken over the place of the legislature and passed legislation. Even though it is mentioned in the text [of the Citizens’ Rights Charter] that the institutions subordinate to the executive branch should observe the articles [of the charter], certainly the determination of a law for all institutions, including the institutions subordinate to the executive branch, is the responsibility of the parliament.”

In this vein, Elham Aminzadeh, the president’s aide on citizens' rights, said Dec. 18, “This document currently doesn’t apply any special sanctions [in case of its violation], but after passing and unveiling it, this issue will be studied.”