Russian-rebel talks resume as Erdogan backs down on Assad

Talks between Russia and Syrian rebels were reportedly derailed by Turkish President Recep Tayyip Erdogan's contradictory statements on Syria, but they have apparently resumed after he and the Russian president spoke on the phone and Erdogan publicly declared that Turkey is only targeting terrorist organizations in northern Syria. 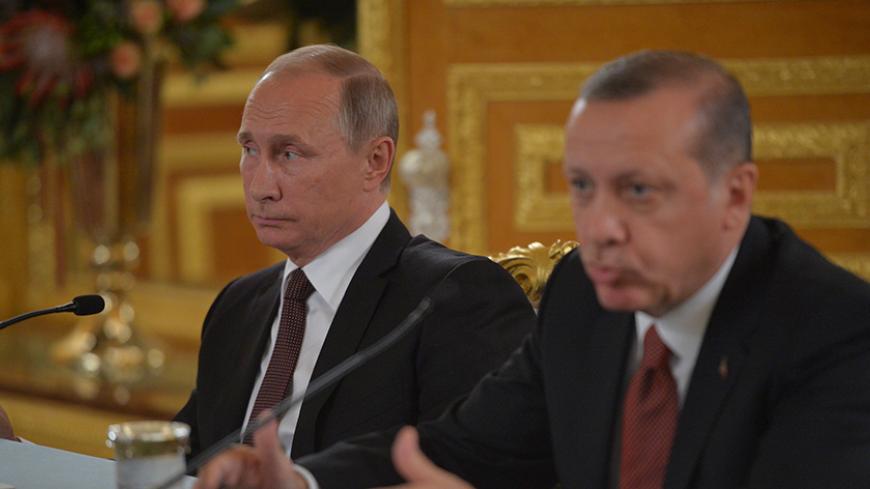 Conflicting statements from Turkey’s president about the country’s ill-fated Syria policy have apparently disrupted secret talks between Syrian opposition rebels and Russia that are being brokered by his own government. The Financial Times reported today that negotiations over an Aleppo cease-fire were derailed after Turkish President Recep Tayyip Erdogan said Turkey’s sole purpose in sending its troops to Syria were to overthrow the country’s President Bashar al-Assad.

The talks apparently resumed only after Erdogan and Putin spoke on the phone on Nov. 30. On the same day, Erdogan publicly declared that the target of the Turkish-led Operation Euphrates Shield in northern Syria was "not a particular country or individual" but "solely terrorist organizations."

The controversy unfolded just as Russia’s Foreign Minister Sergey Lavrov traveled to the resort city of Alanya on Nov. 30 to talk about Syria and other bilateral matters with his Turkish counterpart Mevlut Cavusoglu. At a news conference following their talks today, Cavusoglu said that he and Lavrov had agreed on a cease-fire in Aleppo but that Turkey’s stance on Assad remained unchanged.

In an interesting aside, US president-elect Donald Trump's oldest son, Donald Jr., was in the neighboring resort of Antalya around the same time as Lavrov. His secret visit, first reported by the independent Turkish online news portal Diken, was purportedly to hunt wild goats in the area at the invitation of an unidentified Turkish businessman.

The businessman was most likely Turkish media tycoon Aydin Dogan, who is the US president-elect’s business partner in an Istanbul skyscraper called Trump Towers.

Turkish officials speaking to Al-Monitor on strict condition of anonymity said they did not know whether Lavrov and Trump might have crossed paths in southern Turkey. “Trump Jr.’s trip was not handled by our government but by private individuals,” one of the officials said.

Alongside his passion for hunting, Trump Jr. is known to have an interest in Syria. The Wall Street Journal reported last month that he had held private talks with diplomats, businessmen and politicians in Paris in October “that focused in part on finding a way to cooperate with Russia to end the war in Syria.” The event was hosted by a French think tank run by Fabien Baussart and his Syrian wife Randa Kassis, who according to the Journal “have worked closely with Russia to try to end the conflict.”

Meanwhile, the Kurdish-led Syrian Democratic Forces (SDF) claimed they had killed at least 37 fighters from Operation Euphrates Shield in the northern Aleppo countryside after the Turkish-backed group sought to seize control of the SDF-held town of Oulasha.

Turkey has been seeking to roll back the Kurdish-dominated group’s advances near al-Bab and Manbij. The SDF-backed Manbij Military Council announced yesterday that an American and a German fighting for the SDF had been killed Nov. 26 as a result of Turkish airstrikes on western Manbij. They were identified as Michael Israel and Anton Leschek, respectively.

The pair was believed to have volunteered for the Syrian Kurdish People’s Protection Units, whom Turkey labels as terrorists. Turkey says regardless of their nationalities, anyone fighting for the group would be viewed as legitimate targets.