The House passed a defense bill that conditionally allows the provision of MANPADs to anti-Syrian regime forces. 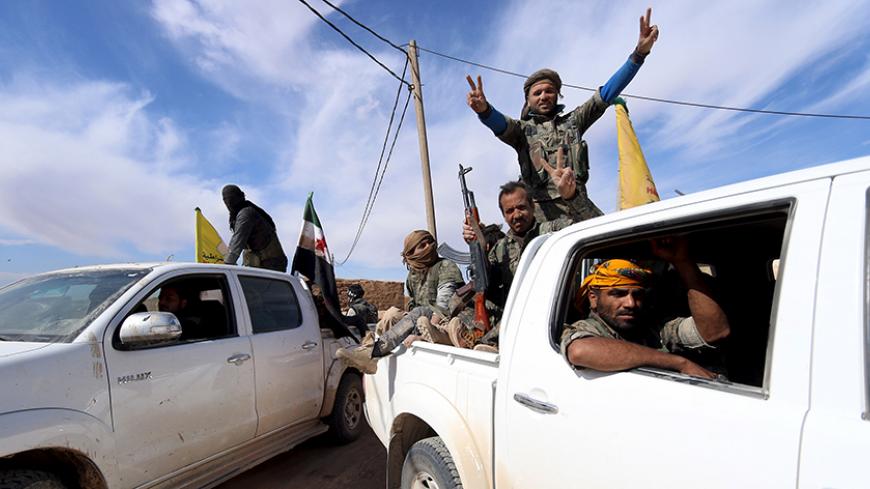 Syrian Democratic Forces and Free Syrian Army fighters gesture on the back of pickup trucks in a village on the outskirts of al-Shadadi, in Hasakah countryside, Syria, Feb. 19, 2016. - REUTERS/Rodi Said

While the language in the annual defense bill also creates restrictions on the provision of the controversial weapons, it represents a win for Senate Armed Services Committee Chairman John McCain, R-Ariz., a fervent advocate of helping the rebels resist President Bashar al-Assad and his Russian and Iranian allies. The Senate is expected to pass the bill next week.

Until now, the transfer of man-portable air-defense systems, or MANPADs, had been implicitly authorized in the absence of an outright ban. Critics, however, view the new provision as tantamount to a policy recommendation for the president-elect.

"I'm more afraid of Congress on this issue than I am of Trump,” said Robert Naiman, the policy director at Just Foreign Policy, a liberal advocacy group that lobbied for a ban. “I think Congress is trying to tie Trump's hands against making a realistic deal with Russia to end the Syrian civil war. And they are trying to pressure him in the direction of not doing that," he told Al-Monitor.

Trump was outspoken about his reluctance to get dragged into the Syrian civil war throughout the presidential campaign. He has since picked hawkish advisers and candidates for Cabinet positions, including retired Marine Gen. James Mattis as secretary of defense.

The rebels “are being slaughtered as we speak. A genocide is taking place. It's a black mark on American history," McCain told Al-Monitor when asked about the MANPAD provision. “I think [Trump] is going to listen to the people he appoints as secretary of defense and secretary of state.”

Mattis is well known in military and foreign policy circles for his aggressive determination to take on America’s foes, notably Iran, including in Syria and Iraq. Testifying before the Senate Armed Services Committee as far back as January 2015, however, he opined that the time for supporting moderate rebel fighters against Assad's forces had "passed."

US-backed Syrian rebels noticed and applauded the policy change, while questioning Trump’s intention to make use of it.

“This move could have [been] a potential game-changer for the opposition a year ago … in response to Russia's intervention, which as we've seen has primarily been one involving the heavy use of air power,” Bassam Barabandi, a political adviser to the Syrian opposition's High Negotiations Committee, told Al-Monitor via email. “If Trump decides not to end American military support for the rebels, providing MANPADs could help the opposition maintain its positions in Idlib, which I suspect is where Russian air power will be concentrated on after Aleppo falls to the regime."

The new provision was added in while the House and Senate worked out differences between the bills they passed earlier this year. The original House bill expressly prohibited the transfer of MANPADs to “any entity” in Syria, while the Senate version made no mention of them.

“The point of the conference committee is to resolve disagreements between the chambers," a House aide told Al-Monitor on condition of anonymity. "In this case, the conference committee’s resolution between an outright ban on sending them to Syria and the Senate’s lack of any comment whatsoever was somehow to explicitly authorize the transfer of MANPADs without any of the safety precautions that were widely deemed to be a minimum requirement for doing so.”

The “safety precautions” mentioned by the aide refer to potential technological controls that the United States has been trying to design, without much success, in case such weapons were to fall into the wrong hands. The compromise defense bill however does require the executive branch to notify Congress if it decides to provide MANPADs to the Syrian rebels, provide a detailed intelligence assessment of who would get them and then wait 30 days for any congressional reaction.

The new provision “would require the secretary of defense and secretary of state to notify the congressional defense committees, the Senate Foreign Relations Committee and the House Foreign Affairs Committee should a determination be made to provide MANPADs to elements of the appropriately vetted Syrian opposition,” according to the explanatory statement accompanying the compromise bill. “The conferees expect that should such a determination be made, the requirement for the provision of such a capability and the decision to provide it would be thoroughly vetted by and receive broad support from the interagency.”

Still, the compromise has outraged House lawmakers who want to keep MANPADs out of Syria. These members have long sought to explicitly ban their transfer, notably in a restriction to the Syria Train-and-Equip program in last year’s defense spending bill that was stripped out during negotiations with the Senate.

"I am disappointed that the House of Representatives’ explicit prohibition on the transfer of these dangerous weapons into Syria was reversed — behind closed doors — by the conference committee," Rep. John Conyers, D-Mich., told Al-Monitor in an emailed statement. "This brazen act shows that some in Congress still hope to further escalate the civil war in Syria. Sending these weapons would only prolong this horrific conflict — and endanger civilian airliners across the region, including in Israel."

Conyers was one of 34 lawmakers who voted against the bill on Friday.