Iraq's Caucasus tribes — the Circassians, Chechens and Dagestanis — are joining together in the hopes of being recognized as an official minority group in the Iraqi Constitution. 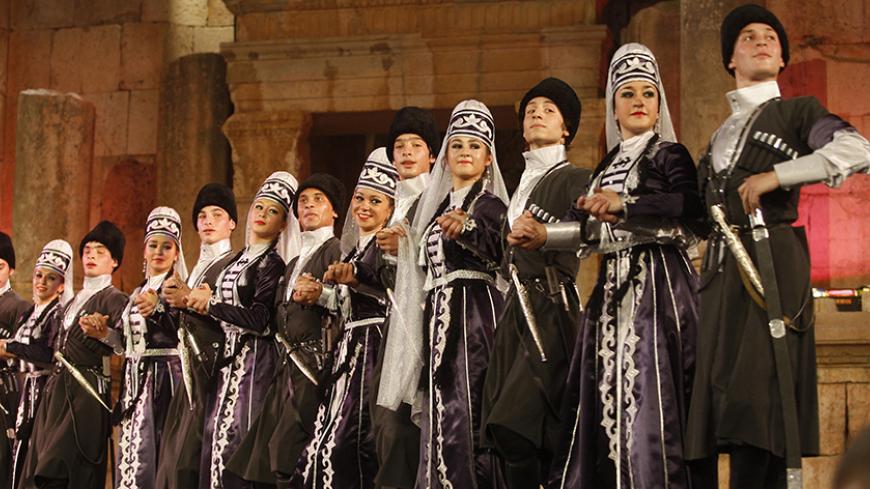 Dancers from the Circassian minority perform dances from their old folklore heritage at the Southern Theater during the Jerash Festival in the ancient city of Jerash, Jordan, July 26, 2011. - REUTERS/Stringer

SULAIMANIYAH, Iraq — Three Iraqi Caucasus tribes are uniting to seek recognition under the Iraqi Constitution. The Circassians, Chechens and Dagestanis want to unify their communities under one national name, “Caucasus,” much like the Christians of Iraq did when they formed the Chaldean Syriac Assyrian Popular Council political party in 2007.

The tribes seek formal recognition in the constitution to guarantee equal rights and legal protection from violence against minorities. On Nov. 24, the nongovernmental organization Masarat for Cultural and Media Development (MCMD) hosted a meeting of representatives of the three groups in the Sulaimaniyah governorate in the Kurdistan Region of Iraq. There, they asked to be included among Iraqi minorities and officially declared their demands. MCMD is preparing a draft law regarding rights for minorities that it will submit to parliament.

Ahmed Kataw, the leader of Circassians in Iraq, spoke to Al-Monitor about these demands, saying, “The Iraqi Constitution should recognize the Iraqi Caucasus tribes — Circassians, Chechens and Dagestanis — like the rest of the officially recognized minorities. Their names should be included within the Iraqi minorities protected under the draft law. … We want to make sure the Caucasian minorities are represented in the parliament according to the quota system, by virtue of which other minorities are represented.”

The Caucasus tribes were late presenting their demands to MCMD because, they said, they were unable to form a political party to represent them at the official level, and there were disagreements about selecting leaders to convey these demands.

Kataw said tense security situations, such as scattered armed confrontations and the battle against the Islamic State, have made it risky to start a political movement. “We did not form a political party. We did, however, start establishing a cultural-social organization called Solidarity Association back in 2004, headquartered in Kirkuk," he said. "As a representative of the Circassians in Iraq, I have served as vice president of the association, and a Chechen was nominated president, while the secretary-general was a Dagestani. The 450 members of the general assembly took a vote, but the security conditions impeded us from turning the association into a political body. In addition, we were afraid we would be dominated by major political movements once we had announced we were forming an independent political party.”

Adnan Abdul Bari, who represents the Dagestanis in the Solidarity Association, spoke to Al-Monitor about the importance of joint work between the representatives of the Caucasus tribes. “These tribes are considered from the same origins. Their common history, geography, culture and traditions differentiate them from other tribes," he said. "They have the identity of the peoples of the North Caucasus, so it is time for them to come forward as one people with a single cultural identity.”

The small number of Caucasus tribes and the fact that they are not concentrated geographically has weakened their participation in public life.

Researcher Mohammed Hussein Dagestani, the editor of the magazine Tadamon (Solidarity), which is concerned with Circassians, Chechens and Dagestanis, is head of the Iraqi Journalists Syndicate in Kirkuk. He told Al-Monitor, “Russia forced the Caucasus tribes into displacement in 1864. They had to move from North Caucasus to Turkish territory, and the Ottomans then forced them out to Jordan, Syria and Iraq.”

Hussein Dagestani added, “This tragedy is similar to some experienced by other minorities, such as the Armenians, who fled to Iraq and other countries after the massacres committed by the Turks in 1915. We also share some experiences with the Yazidis, who had been subjected to a series of genocides, most recently by the Islamic State in 2016.”

Mazen Abdul Rahman, the Chechen representative of the Solidarity Association, told Al-Monitor there are scattered Chechen settlements, but "there are no settlements for either Dagestanis or Circassians because they are rather integrated into the urban centers.”

According to Katwa, there are more than 15,000 Caucasians, and the tribes' representatives agree that the Chechens are ranked first in terms of number, followed by the Dagestanis, then the Circassians.

Only a limited number of seniors in Caucasus families still speak Caucasian languages, but their numbers are gradually decreasing, which means their languages will inevitably be forgotten.

Another factor contributing to the demise of Caucasian culture is their way of blending in and their refusal to stand out in society. They act as Arabs in Arab areas, as Kurds in Kurdish areas and Turkmen in Turkmen areas. The Caucasian families who lived in Shiite-dominated areas embraced the Shiite sect, while those who lived in Sunni areas followed the Sunni sect.

However, the long years of blending in did not stop these tribes from practicing their traditions, such as applying the norms and principles of the so-called Adiga law, by virtue of which parents and grandparents have to follow Caucasus traditions when it comes to marriage, childbirth and other social occasions.