Turkish President Recep Tayyip Erdogan seems indifferent to Western countries' warnings about the increased likelihood of terror attacks in Turkey, but citizens there are taking note. 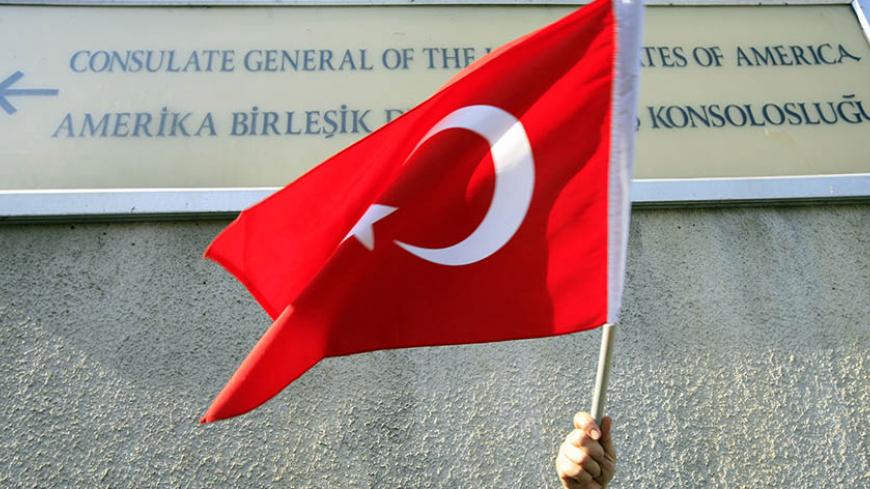 A protester holds a Turkish flag under a sign for the US Consulate in Istanbul, Turkey, Oct. 26, 2007. - REUTERS/Fatih Saribas

The US State Department has ordered the families of its consulate staff in Istanbul to leave the country. Now, Turks fear for the worst.

In an Oct. 29 order, the US government cited the increasing possibility of terror attacks against US citizens in Istanbul. The State Department has frequently issued short-term travel alerts to its citizens in Turkey in the past two years, but those typically involved visits to southeast Turkey and near the Syrian border. The new order applies specifically to diplomatic families in Istanbul.

The order noted that the consulate will remain open and fully functional. It did not apply to other posts, although the US Consulate in Adana province issued a warning Nov. 4 that terror organizations in the city might target US citizens and warned them to be vigilant.

The pro-government media reported the news of the Istanbul consulate warning briefly and calmly. Members of the Turkish public, however — particularly middle- and upper-middle-class Turks — were not so calm. To gauge reactions, Al-Monitor informally surveyed groups of college-educated Istanbul residents and monitored social media sites such as Twitter and Eksi Sozluk. The responses fall into two basic categories. The first was the "sour grape" group, which expressed bitter anger over the US decision to save only its own personnel's families. The group suggested the move might be an omen to impending US-led chaos in Turkey. Some went so far as to suggest that the United States will be responsible for any terror attacks that might take place in Turkey as the consulate families are evacuated.

The second group worried that the Americans would alert and protect their own, but leave the Turks in the dark. Some joked, asking if Americans would take them along, while others asked what would become of those left behind.

Evacuations are complex. In March, the Department of Defense ordered its personnel's dependents to leave Turkey. Departures of family members, sometimes with their pets, is a cumbersome arrangement, not to be undertaken lightly.

Al-Monitor spoke with a former State Department official who asked to remain anonymous. The official explained that decisions of this scale are never haphazard. He refrained from detailing the specific causes for evacuation, but noted such decisions "are always based on a serious security threat — not [just] the usual chatter that is picked up by security services."

"It means that a threat to attack Americans has progressed from the typical boasting, posturing and threatening to actual planning. It does not necessarily mean that a specific terrorist plan was discovered, but rather that a credible risk exists from terrorists, in this case probably [the Islamic State (IS)], which has the means and the intention of carrying out an attack. The US government, via the State Department, always attempts to advise US citizens living and traveling abroad of heightened security risks," he said.

When asked why the decision could not be carried out more quietly, he said, "The State Department does not keep track of American citizens living in or visiting Turkey, and of course has no idea which Americans might be planning travel to Turkey in the coming months, so such travel warnings must be done publicly. An evacuation of embassy or consulate personnel could not be kept secret for long, and it is independent of the general travel advisory to American citizens, in any case."

Indeed, data from the Turkish Ministry of Culture and Tourism shows that in 2015-16, the number of Americans traveling to Turkey has decreased 42.3%.

So, is this warning and others part of a greater plan to hurt Turkey? The former State Department official answered Al-Monitor's questions in detail: "Such precautions do not happen in a vacuum. Under the terms of the Vienna Convention, responsibility for security of embassies and consulates rests solely with the host country. US Embassy personnel and host country government officials work closely together on a daily basis to share information and discuss potential security threats. The decision to evacuate the families of consular personnel is almost always taken with the full knowledge, advice and cooperation of the host nation's Ministry of Foreign Affairs."

Al-Monitor asked if evacuating family members from foreign missions is common practice. "Such an action is rare. The only other recent case I can think of is the Congo. It is expensive, certainly several hundred thousand dollars, to get the family members and enough of their personal belongings to live on indefinitely out of the country, and probably a million dollars a month to support them until their eventual return," he said.

"On a human level, an evacuation causes an extraordinary amount of disruption in the lives of embassy and consulate families. Many have school-age children who now must be taken out of school in the host country and placed in new schools in the middle of the school year in the United States. Many spouses work in the host country, and those jobs and incomes are lost, perhaps permanently. The financial support provided by the State Department for separate housing [normally somewhere in the United States] and per diem [expenses] only covers a fraction of the actual cost of maintaining a second, separate household in the United States for the families, so significant financial hardship is always involved. The decision to evacuate is never a 'political message.'"

What these warnings tell us is that the Turkish government does not want, or is simply unable, to seriously tackle the growing security deficit. Even the declared state of emergency and increasing militarization has not been able to prevent the drastic rise in terrorism or organized crime.

Quality of life has decreased significantly in the last couple of years in Turkey, particularly as a result of President Recep Tayyip Erdogan's adventurist policies in Syria. This is obvious from the changes in hazardous duty pay percentages calculated by the State Department for its Foreign Service personnel. Personnel in Turkey didn't receive hazard pay until September 2015, when those serving in the southeastern border province of Gaziantep were added. But since April 3, workers in several Turkish cities have been added, including Istanbul, Ankara and Izmir.

It is not just the data applicable to the US Department of State or the Department of Defense that indicate there is a growing security problem in Turkey. The number of applications for asylum to various Western countries has skyrocketed in the last year. Applications to Germany from Turkish citizens have doubled.

Given the growing unrest in Turkey, it is safe to predict that ordered departures from US and other countries' missions will only increase in the coming months. Erdogan's lack of concern about US actions can be predicted from what he said Oct. 14 about capital punishment: "I will approve the death penalty; the West cannot comment." On Nov. 6, he ridiculed the German press for calling him a dictator, adding that he didn't care. It seems the feeling is mutual, that the West does not care for Erdogan. In other words, the importance of Western views for Turkish policymakers is decreasing as security deteriorates and foreign missions and globally connected Turks leave the country.