Giant infrastructure projects launched by the Turkish government have raised the specter of potentially unpredictable burdens on public finances amid little transparency on loan and demand guarantees provided to private contractors. 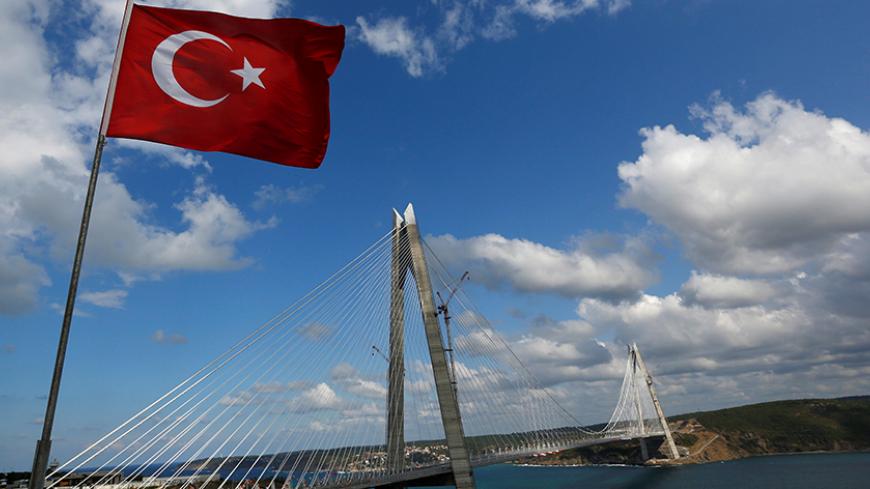 The newly built Yavuz Sultan Selim Bridge is pictured with a Turkish flag during the opening ceremony in Istanbul, Turkey, Aug. 26, 2016. - REUTERS/Murad Sezer

A key element in the image of success the Turkish government is trying to project is the large number of grand construction projects in the country combined with the narrative that Turkey faces challenges by adversaries who are “jealous” of its progress and resurging power. For instance, President Recep Tayyip Erdogan told a crowd of supporters in May, “Why is the West jealous of us? It’s because of the dams. … It’s because of the Yavuz Sultan Selim Bridge [over the Bosporus]. … It’s because of the Marmaray Tunnel and subway running under the Bosporus.”

The largest “megaprojects” — as Ankara calls them — include a giant third airport in Istanbul; the Eurasia Tunnel, an undersea motorway between the European and Asian shores of the Bosporus; and a highway complete with a suspension bridge from the industrial hub of Gebze outside Istanbul to Turkey’s third-largest city, Izmir. Yet the projects have never been free of controversy, criticism and protests over various legal, environmental and financial aspects. Many people worry that the construction drive is creating a “black hole” in public finances.

The megaprojects are being built on the public-private partnership (PPP) model and, as such, are ultimately viewed as a sort of privatization. Though the state remains the owner of public property such as land, shores, waterways and mines, the transfer of operation and usage rights to private companies is, in a broad sense, a sequel of privatization.

The PPP model, including methods such as build-operate-transfer or the transfer of operational rights, is an investment model that the World Bank has promoted and backed, especially for emerging economies. According to World Bank figures, Turkey is third among 10 emerging countries in terms of the total contract value of PPP project stocks. Brazil tops the list with $510 billion, followed by India with $341 billion and Turkey with $161 billion. The fourth-largest project stock, worth $155 billion, belongs to Russia, followed by Mexico with $141 billion and China, which surprisingly lags behind in this field with $139 billion.

Four of the 34 PPP projects that are under construction in Turkey account for two-thirds of the total investment volume. And the largest of the four, the $14 billion third airport for Istanbul, accounts for 38% on its own. Three of the four largest projects are located in Istanbul, Turkey’s most populous city and industrial hub. The third airport, the Eurasia Tunnel and the Yavuz Sultan Selim Bridge — the already operational third suspension bridge over the Bosporus — are part of an interconnected scheme, along with Canal Istanbul, a man-made waterway that is still in the planning stage.

The government has cast the PPP projects as the driving force of economic growth, boasting that local and foreign investors are being encouraged to invest in Turkey without spending “a single penny” of public money.

Many Turks, however, refuse to buy this success story. A wide range of critics — opposition parties, professional chambers and civil society groups — counter that the projects are not profitable, feasible or sustainable. The critics say the projects rest on flawed growth, transport and energy policies and have become a tool to advance crony capitalism and nepotism. Major sources of criticism include the lack of concern shown for the environment and historical and cultural heritage as well as a lack of transparency and public scrutiny.

The Court of Accounts, which audits public agencies on behalf of parliament, for instance, has highlighted serious transparency issues at the Directorate-General of Highways (KGM), an affiliate of the Transport and Maritime Affairs Ministry, which leads many of the PPP projects. “The KGM has two projects carried out under the public-private partnership model. No record exists about the demand guarantees given [to private companies] as part of those projects, meaning that the worth of demand guarantees have not been reflected in financial accounts,” the Court of Accounts said in its 2015 report. The auditors stressed that the risks the government undertook under PPP contracts must be shown in the bookkeeping system to allow for a thorough financial analysis, including the strain that projects involving demand guarantees had put on public finances, the government’s capacity to meet such obligations and future financing needs.

Such problems of transparency and auditing have fueled concern that some unpleasant surprises could be in store for the Treasury. All PPP projects involve guarantees, meaning a guaranteed minimum profit for the contractors, both local and foreign, no matter how the projects perform once they become operational. The Gebze-Izmir Motorway project, for instance, involves a demand guarantee of 40 billion Turkish liras (some $13 billion) for the contractors, who will hold the operational rights for 15 years. In the North Marmara Motorway project, which includes the third Bosporus bridge, the demand guarantee is nearly $6 billion for an operation period of about eight years. In the project for Istanbul’s third airport, the passenger guarantees for international flights and transits alone amount to 6.3 billion euros ($6.94 billion) for the first 12 years, while the guarantees for the Eurasia Tunnel cover 70,000 vehicle crossings per day. In the health sector, meanwhile, public hospitals will pay $27 billion in rent for buildings in large health campuses, which contractors will build and operate for 25 years, according to Development Ministry figures.

The guarantees were based on a projection of economic growth of at least 4% to 5% per year, which dates back to 2013 and 2014, when the projects were tendered. Since then, however, the growth rate has slowed down to an average of 2.5% to 3%. The government’s 5% growth target for the coming years seems unrealistic, given the slowdown in the inflow of foreign capital. So if the projects fail to generate the expected income when they become operational, the Treasury will have to pay the guaranteed sums to the companies, opening black holes in the budget.

The Treasury, along with the banking system, is exposed to another risk from the megaprojects. The Treasury has backed the financing of the projects as a guarantor. Amid growing volatility, external financing had become difficult, and public banks were, in a sense, forced to finance the projects at government behest. This, in turn, upset their asset structures, leading top credit rating agencies to downgrade their ratings.

The credit rating agencies seem to have factored in particularly the Treasury’s debt guarantees for the third Bosporus bridge, the Eurasia Tunnel and the Gebze-Izmir Motorway. The Treasury, which puts the total investment volume of the three projects at $11 billion and the loans they have used at $8.7 billion, has guaranteed that it will assume all financial obligations, including external financing burdens, if the projects are canceled or related government agencies take over the infrastructure in question before contracts expire. In sum, the credit rating agencies believe that those loan risks contribute to economic volatility, along with other risks in public finances.

Fresh financial woes are likely to follow the existing problems once the PPP projects become operational. How those problems will be overcome remains unclear. Yet more ambitious projects such as Canal Istanbul, the Dardanelles Bridge and a three-deck undersea tunnel in the Bosporus are up for auction in the coming days.