Does Turkey have upper hand in EU membership battle?

Turkish President Recep Tayyip Erdogan’s gamble with countries of the European Union may succeed if the Europeans blink first. 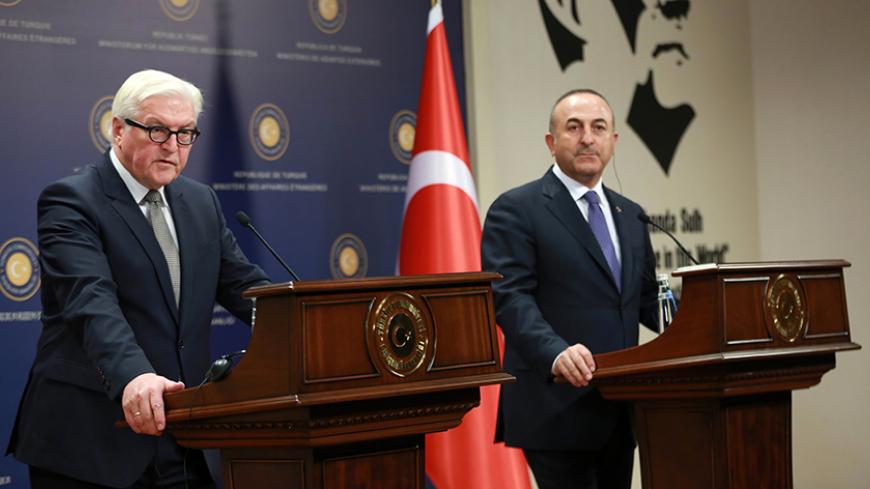 In the joint press conference in Ankara by German Foreign Minister Frank-Walter Steinmeier and his Turkish counterpart, Mevlut Cavusoglu, Steinmeier (a Social Democrat) voiced his concern about the massive crackdown and waves of arrests and the pressures on the media. Concerning the continuation of accession negotiations between the European Union and Turkey, he said, “The decision [to suspend them] should not be made by the EU capitals, but Turkey should reach a decision on [its relations with the] EU.”

Several media outlets reported that Steinmeier was not extended traditional Turkish hospitality and was received in a way that demonstrates Turkish fury against the EU.

A day before his Ankara visit, Steinmeier was more explicit, saying, “We cannot decide for the government in Ankara whether they will slam the door on the EU and turn away from the West. That is Ankara's responsibility. If they decide to reintroduce the death penalty, then that would be a clear signal that they want to permanently close the 'EU file.'"

Cavusoglu alleged that the views of the EU and the foreign ministers of its member countries will trigger a serious reaction in Turkey. “We are fed up with the humiliating attitudes of the EU countries toward Turkey,” he said.

The statements of both ministers summarize where Turkey-EU relations stand: back to square one, which is becoming more and more an unsustainable crisis point.

Steinmeier’s hasty visit to Ankara followed the meeting of EU foreign ministers in Brussels on Nov. 14 that ended with disagreement on how to act vis-a-vis Ankara in regard to its violations of basic freedoms that reached unprecedented levels. Turkey had arrested on very flimsy, even outrageous, charges the co-chair and nine members of a political party that is the third largest in terms of representation in the parliament, as well as the executives and columnists of Turkey’s oldest daily Cumhuriyet.

In the Brussels meeting, Austria’s call to suspend Ankara's EU membership bid failed to garner enough backing. "I am not for the continuation of entry negotiations, and I believe that this Turkey does not have a place in the European Union," said Austrian Foreign Minister Sebastian Kurz.

Luxembourg and Belgium were also critical of Turkey. Yet the EU’s most powerful members — France and Germany — support continued engagement, arguing that ending the accession negotiations now would do more harm than good.

"Turkey is too important to us — not least because of the close personal times between our two countries — that we could afford to renounce dialogue, particularly in these difficult times," Steinmeier told reporters before leaving for a one-day visit to Ankara.

Finnish Foreign Minister Timo Soini told reporters, "It is important to keep the membership negotiations ongoing since it is the only way to influence Turkey. Everybody understands that if it goes on like this, Turkey will not become a member of the EU. The death penalty is the absolute red line for the EU."

The issue of bringing back the death penalty was revived by President Recep Tayyip Erdogan in his statements during the week. His remarks prompted harsh responses from EU officials. European Parliament’s Turkey rapporteur Kati Piri (Dutch Social Democrat) proposed suspension of the accession talks with Turkey, and European Parliament’s German President Martin Schultz also warned Turkey on the outcome of the accession talks.

Erdogan grabbed the opportunity and lambasted the EU and its officials once again, in a language that could be interpreted as insulting. To Schultz, “Who the hell are you?!” he yelled in his own characteristic way.

Erdogan said he was ready to hold a referendum on whether to continue the membership talks and reiterated that he would restore the death penalty if the Turkish parliament passed such a law.

Turkey's president is well-aware that toying with the idea of introducing the death penalty equals a death knell for Turkey’s ultimate membership to the EU. The EU leaders made it clear that in such a case the EU will shut the door to Turkey formally and definitely.

Erdogan is also aware that the Turkey-EU relationship is unsustainable in its present form. But he wants the European side to be blamed in the case of the termination of the dialogue, not Turkey.

It turned out to be a game of who will blink first. Erdogan is quite certain that European weaknesses can be used as leverage, such as the specter of refugees storming the continent if Turkey opens the floodgates, as well as the European disarray in the wake of Brexit. Donald Trump’s victory in the US presidential elections provided even more leverage to be used against Europe, in the perception of Erdogan.

The timid response of the EU foreign ministers in Brussels, despite the vitriolic attacks of Turkey's president toward Europe, proves Erdogan is not wrong in his assessment of how far the Europeans can go.

Even Schultz, who angered Erdogan, told Germany’s Bild am Sonntag newspaper that breaking off talks with Turkey would rob the EU of channels to help Turkey’s opposition and the tens of thousands detained since July’s failed putsch. Instead, Schultz said, “We as the EU will have to consider which economic measures we can take.”

It is in the same line as the thought of cutting negotiations with Turkey will do more harm than good, Steinmeier (who will probably be the next president to replace Joachim Gauck) suggested. It leaked out from the Brussels meeting that some EU countries said the bloc would lose any residual influence it has over Turkey if it suspended talks.

However, it is very dubious what sort of a contribution “keeping the channels open” made in terms of improving Turkey’s dismal human rights record, which has deteriorated further in the wake of the failed coup in July. Equally, it has become legitimate to ask what the “residual influence” the bloc believes to have over Ankara served in regard to continuous violation of basic freedoms in Turkey thanks to the declaration of a state of emergency.

It is understandable that the Europeans do not want to provide Erdogan the alibi or the pretext to undo Turkey’s bonds with the EU.

Whatever the European reasoning might be, preserving ties with Turkey, at least as “business as usual,” is getting to be impossible. Especially after the arrest of the leaders and members of parliament of the third-largest bloc in the Turkish parliament and the subsequent crackdown on Turkey’s oldest daily Cumhuriyet, it is impossible to speak about a functioning democracy in Turkey. The debate in the Western circles is whether Turkey has to be called an “authoritarian” country or if it already crossed the Rubicon and entered into the realm of “totalitarianism.”

Ironically, Boris Johnson, the British foreign minister, who while campaigning for Brexit justified his position that there is no place for Britain in an EU with Turkey, cautioned against overreaction to undemocratic practices in Turkey, saying, "We should not push Turkey into a corner. We should not overreact in a way that is against our collective interests."

It is sardonic that Britain, while leaving the EU, is trying to keep Turkey, with its poor record, within the union.

Turkey will be on the agenda of the EU summit scheduled for Dec. 15-16. To stop the talks with Turkey it would have to be a majority vote, and it is clear there is no majority at this stage. It looks unlikely that in a month’s time, at the EU summit, there is going to be one.

Until then, Erdogan does not emerge as the loser in the precarious Turkey-EU relations.