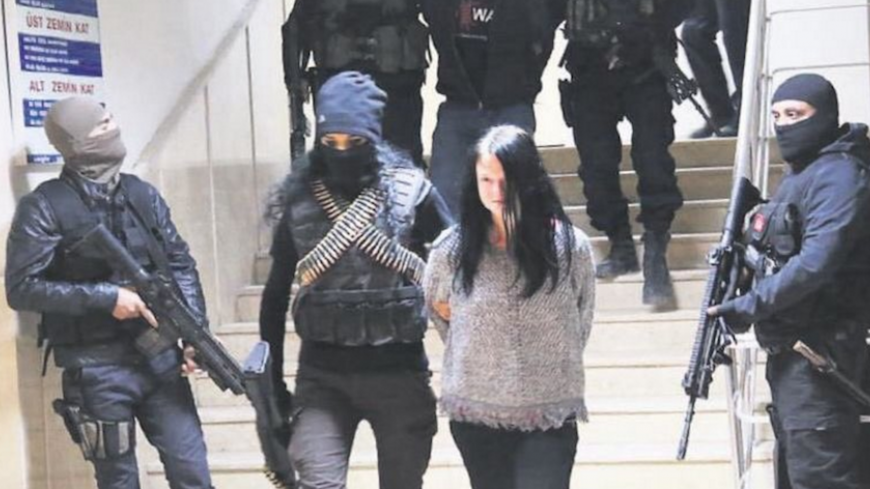 Miroslav Farkas and Markera Vselichova, as they are lead away by Turkish special forces in Sirnak, Turkey, Nov. 16, 2016. - Twitter/@Koobster27

Prague is a favorite honeymoon destination for Turkish newlyweds, and the Czech Republic is generally idealized in Turkey as a mecca of beautiful women and febrile intellectuals, all sipping the country’s famous brews. It must have therefore come as something of a shock for many Turks to read the headline news today that two “Czech terrorists” had been arrested in the predominantly Kurdish town of Sirnak, in southeastern Turkey.

The pair, identified as Miroslav Farkas and Marketa Vselichova, are allegedly members of the Syrian Kurdish People’s Protection Units (YPG), the United States’ top ally in the fight against the Islamic State (IS) in Syria. The YPG is also closely linked to the Kurdistan Workers Party (PKK), which is fighting for Kurdish autonomy in Turkey. Turkey considers both groups terrorist organizations and is infuriated by the YPG's cooperation with Washington.

The Daily Sabah reported that Farkas was alleged to be a sniper, described Vselichova as a female and said they were responsible for “coordinating the arrival of new volunteer terrorists from Europe to Syria.” Meanwhile, Takvim ran a photograph of the buxom Vselichova being whisked away by masked Turkish special forces. The Czechs were supposedly detained as they tried to illegally cross into Turkey from Syria. They allegedly confessed under interrogation that they had been “trained” by “German special forces and in the French Foreign Legion.”

The Czech Foreign Ministry presented a somewhat different version of events. Spokeswoman Michaela Lagronova confirmed that Turkish authorities had found material linking Farka and Vselichova to the YPG, but she said they had been arrested Oct. 13 in Sirnak while trying to cross the border into Iraq. This makes more sense, as Sirnak borders Iraq, not Syria.

The amicable relationship between Czechs and the YPG is no secret. Prague was one of the first European capitals in which the YPG opened a representation office, earlier this year.

Czech Defense Ministry and other officials are said to regularly hobnob with YPG cadres. Alongside Albania, the Czech Republic is one of the main sources of weapons flowing to the YPG via the US-led coalition against IS.

Czech volunteers are known to have taken up arms with the YPG. Their exact numbers are unknown, but Phillip Lohaus, a former Pentagon analyst, reckons there may be around a hundred foreign volunteers fighting with the YPG. They include Americans, Britons and Germans. Turkey says that regardless of their nationality, they are all considered terrorists.

Turkey’s Western allies and Russia may have been more impressed by the formal arrests of seven people accused of membership in Jabhat al-Nusra, the Syrian jihadis tied to al-Qaeda. The suspects, only identified by their initials, were picked up Nov. 1 in separate sweeps in Agri, Van, Hatay and Istanbul.

Meanwhile, Turkey’s all-out campaign to crush the PKK and its affiliates continues at full blast, as the mayor of Van, the second-largest, predominantly Kurdish city in the southeast, was detained Nov. 17. Protests erupted in the city, as Bekir Kaya, who was elected on the pro-Kurdish Democratic Regions Party (DBP) ticket, was hauled off to jail and a government administrator appointed in his stead.

Over the past 48 hours, the mayors of Tunceli and Siirt, both of the DBP, suffered a similar fate. Ahmet Turk, the DBP co-mayor of Mardin and one of Turkey’s best-known Kurdish politicians, was merely fired. All are accused of being tied to the PKK.

According to the latest tally, some 34 DBP-administered municipalities have been taken over by the government and a total 38 mayors arrested. Seven mayors also wanted on terror charges are on the run. Selahattin Demirtas and Figen Yuksekdag, the co-chairs of the DBP’s sister party, the Peoples’ Democratic Party (HDP), were locked up earlier this month, along with eight other fellow HDP lawmakers.

Turk, speaking to the pro-PKK Firat news agency after a government administrator assumed his duties, said, “The [ruling Justice and Development Party] wants — through such shock tactics — to subdue everyone. They can never subdue us. They will not succeed.”

The pattern of Turkey’s often-brutal efforts to quash the Kurds’ long-running struggle for greater freedom suggests that Turk may be right.