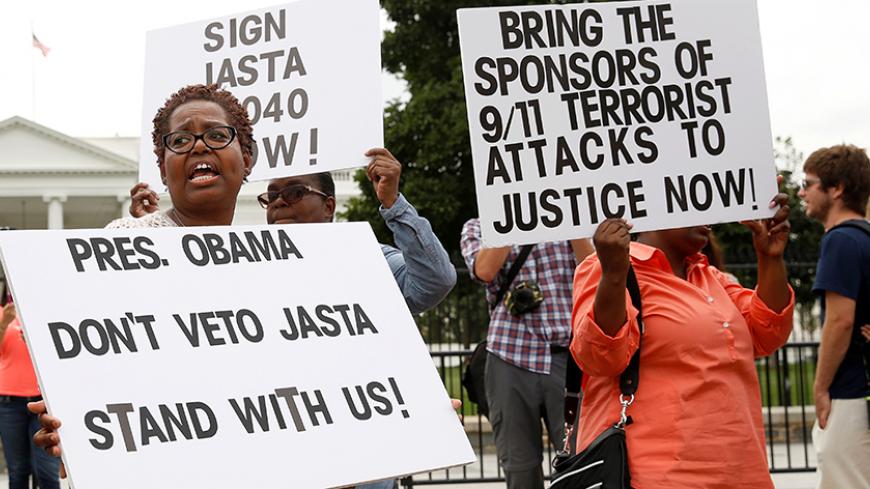 Protesters and family members of 9/11 victims protest in front of the White House regarding President Barack Obama's threatened veto of the Justice Against Sponsors of Terrorism Act (JASTA) in Washington, Sept. 20, 2016. Obama's veto was overridden by Congress. - REUTERS/Gary Cameron

Saudi Arabia is turning to officials of US states in a last-ditch attempt to prevent the families of victims of the 9/11 terrorist attacks from being able to sue the kingdom in court.

The Saudi Embassy hired Washington-based Flywheel Government Solutions last week to build support among governors and other elected state officials for repealing the Justice Against Sponsors of Terrorism Act (JASTA) bill. The firm is one of nine new lobby shops the Saudis have signed up after it became clear in late September that Congress would override President Barack Obama’s veto of the bill.

“The registrant will provide state-based government relations to engage and educate state officials on the federal JASTA legislation in order to create greater awareness of the legislation, impacts and potential consequences,” Flywheel’s lobbying registration states. “Communications may include the dissemination of written materials, articles, letters of relevance to the legislation’s impact.”

The unusually detailed filing spells out plans to warn state leaders about the potential costs in lost business if the legislation remains on the books. Saudi Foreign Minister Adel al-Jubeir likewise warned Congress in March that Riyadh would be forced to sell off $750 billion in US Treasury securities and other assets if the bill became law, to no avail.

Saudi Arabia spent $9.5 million in 2015 lobbying Congress and the Obama administration, according to an Al-Monitor analysis of Justice Department records, more than twice the $4.1 million spent the previous year. The kingdom appears on track to spend even more in 2016.

Flywheel is set to receive $25,000 per month for its efforts. These include:

The contract comes as several lawmakers, led by Senate Foreign Relations Chairman Bob Corker, R-Tenn., have promised to try to revisit the bill after Election Day, Nov. 8. They are worried about unintended damage to US relations and retaliatory lawsuits against US troops abroad.

Secretary of State John Kerry has also made clear that discussions continue inside the State Department.

“We did discuss the very negative impact on the concept of sovereign immunity,” Kerry told reporters after meeting with Jubeir at the State Department on Oct. 20. “We discussed ways to try to fix this in a way that respects and honors the needs and rights of victims of 9/11 but at the same time does not expose American troops and American partners and American individuals who may be involved in another country to the potential of a lawsuit for those activities. Sovereign immunity is a long-standing, well-upheld standard of law, and unfortunately this legislation — unintentionally, I think — puts it at great risk and thereby puts our country at great risk. So we’re talking about ways to try to address that.”

One potential option that could satisfy the Saudis would be the creation of a State Department waiver that would apply to countries deemed to be reliable allies in fighting both terrorism and religious extremism. Such a fix would likely need to be accompanied by some form of compensation for the victims’ families, however.

“I’ve got some significant concerns about their relationship with Wahhabists,” Corker told Al-Monitor after the Senate’s 97-1 vote to override Obama’s veto. “They made a deal with the devil years ago, and now they’re inextricably, at present, linked to that and tied to that. And that’s of great concern I think to most every person in this body. They know they have issues to deal with. So hopefully something good is going to come out of this.”

Riyadh, for its part, hasn’t given up on fixing the bill and salvaging its decades-old relationship with the United States.

Several of the contracts are explicitly about JASTA. In addition to the Flywheel agreement, these include the Foreign Ministry’s recent contract with Brownstein Hyatt Farber Schreck and the Ministry of Commerce and Investment’s agreement with King & Spalding.