How IS is trying to thwart progress in Mosul operation

Islamic State militants are trying to find security breaches in various areas to distract the Iraqi forces from the operation to liberate Mosul and thus slow down their advance. 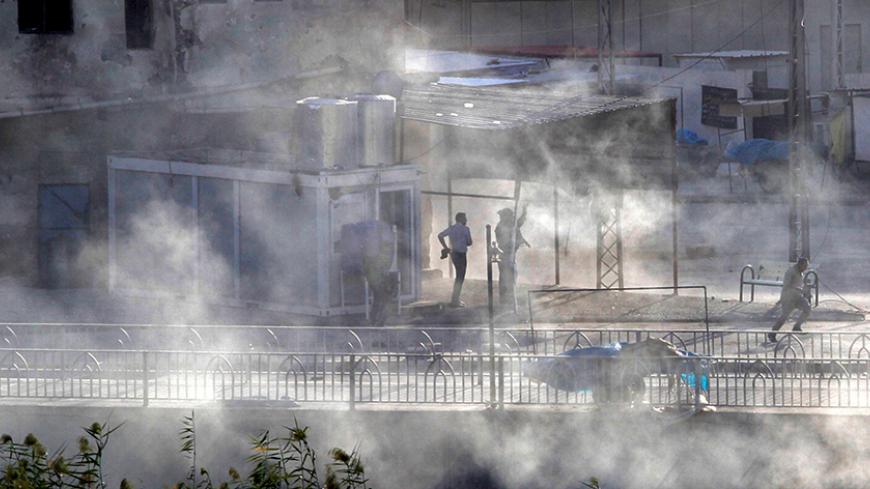 Smoke rises as Kurdish forces take up position at the site of an attack by Islamic State militants in Kirkuk, Iraq, Oct. 21, 2016. - REUTERS/Ako Rasheed

BAGHDAD — After the attack by the Islamic State (IS) on Kirkuk on Oct. 21, the arms market in the city experienced a boom in reaction to the possibility of further attacks. An arms dealer told Al-Monitor, “A weapon that used to sell for 400,000 Iraqi dinars [$338] now sells for 550,000 dinars.”

The Oct. 21 attack was not the only breach that happened since the start of the Mosul operation. On Oct. 23, Rutba in the western part of Anbar province saw a similar breach that led to the fall of almost half the city. Rutba’s situation is very similar to that of Kirkuk because large areas at their edges are under IS control, especially the area between Rutbah and Qaim. A similar attack on Rutba occurred Nov. 7.

On Oct. 4, Sharqat witnessed a violent security breach that led to the fall of most of the city, caused largely because the plain next to Sharqat was left under IS control.

Kirkuk has seen similar breaches before. On Jan. 30, 2015, IS launched a major attack on Kirkuk from three fronts. This breach also started from Hawijah toward Tal al-Ward, Maktab Khaled and Tazeh. The clashes continued for more than a day before the peshmerga forces were able to control the situation.

All this shows the danger of not liberating the areas adjacent to the Tigris River, such as Hawijah, Alzab and al-Abbasi; Prime Minister Haider al-Abadi had promised to liberate them after he visited Kirkuk on Oct. 14.

What recently happened in Kirkuk and places like it reveals the method used by terrorist groups to bring about security breaches, and it shows why it is difficult to completely prevent such breaches before liberating and controlling all of the Iraqi territory.

What happened in Kirkuk and how had IS fighters been able to organize such a great attack? At 3 a.m. Oct. 21, the people of Kirkuk woke up to the sounds of explosions and bullets in the city’s southern neighborhoods and streets. About 200 IS fighters attacked these neighborhoods, which are adjacent to areas still under IS control.

The fighters came on foot from Hawijah to areas close to Abadat village, and two trucks transported them to Sharikat Tarek in the south. They slipped into the Daquq area, which borders the southern parts of Kirkuk. Subsequently, IS sleeper cells in the city used four trucks to move the fighters to neighborhoods in Kirkuk.

IS fighters attacked several police stations and hotels, occupied them and rolled toward the city center. In conjunction with the attack on Kirkuk, IS attacked a number of villages around Dibs and attacked Albouhamdan, Maktab Khaled, Daquq, Sardek, al-Kibba and al-Bashir. It also spread into the following Kirkuk neighborhoods: Wahid Huzeiran, Dumez, al-Uruba, al-Nasr, al-Majidiyah, al-Wasati, al-Tiseen, al-Adala, al-Mamdouda, Ghirdata, part of al-Asra and Mafqoudin neighborhoods, and parts of the military district.

The fighters appealed to the inhabitants for support, telling members of the security forces to either repent or be killed. The fighters attacked security centers such as the emergency regiment headquarters, police stations in al-Adala and Dumez, the headquarters of the Patriotic Union of Kurdistan and the provincial headquarters. Thus, IS elements occupied most southern districts of the city.

In the district of Dibs, two suicide bombers blew themselves up while trying to break into the Dibs power station. The Ministry of Electricity said that the main power plant in the town has stopped working as a result of the attack and noted that the attack also targeted the new Dibs station, killing and wounding 19 technicians and security guards, including Iranian workers in the new station.

Amid this serious security deterioration, the security committee in the province declared a complete curfew in the city. Violent clashes took place in the streets of southern Kirkuk between the peshmerga forces, Asayish and dozens of local volunteers on the one hand and IS fighters on the other. Meanwhile, Abadi ordered additional troops to Kirkuk. According to the Kurdistan Workers Party (PKK) media center, PKK fighters fought IS fighters inside Kirkuk. Also, Faleh al-Khazali, the jihadi associate of Kataib Sayyid al-Shuhada (Master of the Martyrs Brigade) announced that brigade members participated in the Kirkuk events.

Finally, hours after the clashes, the security forces managed to regain control of the situation and break IS’ advance. But the danger is still there; IS elements dissolved into some neighborhoods that it used to control, according to Brig. Gen. Idris Rifaat, the security official in the province.

The clashes flared up again the next day inside Dumez neighborhood, south of the city. The security forces chased IS elements that were fleeing from the city to adjacent towns and managed to kill dozens of them. Brig. Sirhat Qader, the chief of police in Kirkuk, announced that the police forces and the peshmerga forces killed seven IS members between the village of Sari Tabba and Zindana, southeast of Kirkuk.

Despite that, the clashes continued intermittently. On Oct. 27, Helo Najat, the head of the security apparatus in the province announced that at least 89 fighters have been killed since the offensive began and that 15 IS fighters blew themselves up, with the rest getting killed by the security forces.

All these security breaches show that leaving large areas surrounding the liberated areas under IS control helps IS open up fronts to reduce the military pressure the group is under in Mosul. So there may be even more security breaches in the near future in other areas.