The Islamic State is gradually rekindling its terrorist activities in Iraq through sleeper cells in Kirkuk province, where security is already stretched thin by political unrest. 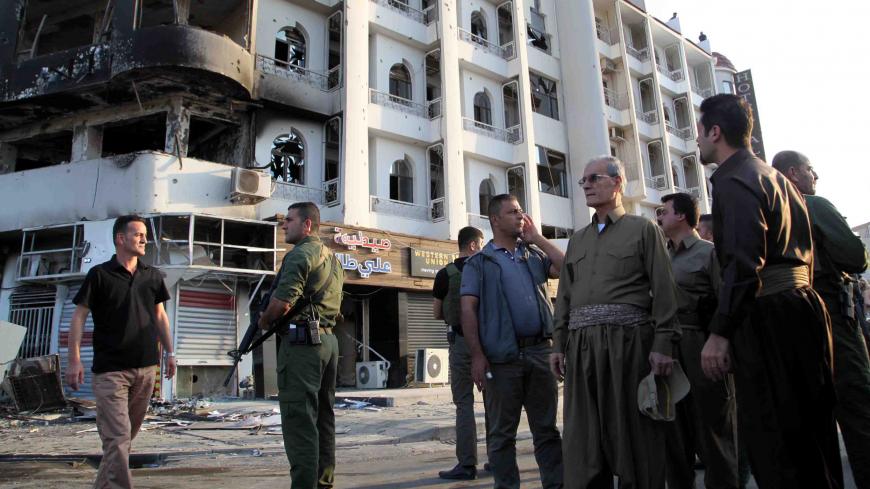 Islamic State affiliates have increased their activity in Kirkuk province in northern Iraq and are said to be focused on attacking civilians and government institutions. Authorities believe IS seeks to destabilize security and re-establish itself after being defeated by Iraqi security and international coalition forces.

The group has been operating for months on Kirkuk's outskirts but has stepped up its efforts recently, kidnapping and killing civilians and carrying out random attacks. On June 27, an IS-affiliated group of five used light weapons to attack some villages in the Daqouk district in southern Kirkuk, killing one civilian and wounding others. Also on June 27, five people from the provinces of Anbar and Karbala who were kidnapped while working with security forces in Kirkuk were found executed on the Kirkuk-Baghdad road.

A police officer in Kirkuk spoke to Al-Monitor June 29 on condition of anonymity because he wasn't authorized to make an official statement to the media. He said, “The information we have indicates that some IS affiliates are regrouping in villages in south Kirkuk. The authorities in the province decided to go on maximum alert and start operations to thwart IS plans."

He went on, “Intelligence suggests that IS has already identified the places it wants to target: the vital areas that are crowded with civilians as well as some government institutions whose work is directly linked to the lives of citizens."

Iraqi forces in coordination with Kurdish peshmerga launched a massive military operation on July 4 against IS cells in the area between Kirkuk and Diyala, toward Iraq's border with Iran. IS has been active in the area recently, committing several kidnappings and murders.

"The security situation in Kirkuk is stable, but at the same time there are some IS sleeper cells and terrorist spots that require time to eliminate them," Brig. Yehia Rasool, the spokesman of the security information center in the Iraqi government, told Al-Monitor. He added, "There is an ongoing operation in areas south of Kirkuk, as well in the Hamrin Mountains and Makhul to cleanse the area and eliminate the IS cells."

The chaotic security situation is worst in Kirkuk’s outskirts. Al-Monitor learned from security services in Kirkuk that citizens have reported seeing IS members operating at night and sometimes even during the day, mostly in rural areas. Within the administrative borders of Kirkuk, IS sets up fake checkpoints and road barricades to ambush people, a method used in 2006 and 2007 during the days of sectarian war in Iraq.

The Iraqi government declared Kirkuk's southern districts liberated from IS in October, but some affiliates who had settled there after fleeing Mosul in 2016 and 2017 remained, keeping a low profile. According to the Kirkuk police officer, IS-affiliated groups follow the instructions of IS members still hiding in and around Hawija near the Hamrin mountain range. From that range, between Diyala, Salahuddin and Kirkuk, IS provides support for sleeper cells.

Kirkuk is a particularly attractive target for IS, given the province's political turmoil — most recently, unrest has arisen from the results of the May elections, allegations of fraud and a lack of trust among the Arab, Kurdish and Turkmen parties. In addition, the province connects Baghdad to the Kurdistan Regional Government. By attacking this area, IS is trying to drive a wedge between the Iraqi provinces. The area also attracts international media attention because of its strategic location and vast oil reserves.

IS targets minorities in Kirkuk, since the Western media takes great interest in covering such attacks. In March, IS blew up a Yarsani shrine in Kirkuk. Previously, IS had published a document threatening minority groups in the province and announcing its intention to kidnap and kill them. In response, Yarsanis were forced to evacuate four villages “because the Iraqi army was unable to save their lives,” Yarsani activist Serhid Kakai told Al-Monitor.

Security services in Kirkuk are having difficulty locating IS affiliates, as each group quickly disappears into residential areas as soon as it carries out an attack. Pursuing them has become even harder since they no longer wear their traditional Afghan uniforms. They have shaved off their beards and stopped driving vehicles bearing the IS flag.