Kerry urges Senate Democrats to back off Iran sanctions renewal

The US secretary of state is on a mission to protect President Barack Obama's foreign policy legacy — and his own. 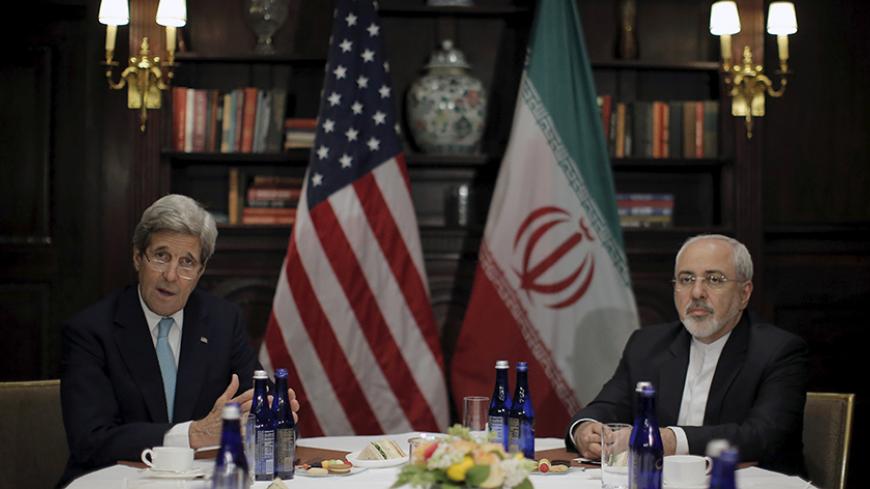 Secretary of State John Kerry visited Capitol Hill ًTuesday evening to caution Senate Democrats against renewing Iran sanctions and to urge them to prevent the incoming administration from unraveling his hard-fought nuclear deal.

The low-key meeting comes ahead of a Senate vote later this week to renew for another 10 years sanctions on Iran's energy, trade, defense and banking sectors that will expire at the end of this year. The White House has stopped short of saying it will veto the bill, but has sought to delay a vote.

Administration officials have also made it clear that they think passing it will antagonize the Iranians without giving the executive branch any powers it doesn't already have to “snap back” sanctions if Tehran violates the deal. After the House of Representatives passed the bill by a lopsided vote of 419-1 two weeks ago, Iran's supreme leader, Ayatollah Ali Khamenei, said the sanctions' extension would “surely constitute a violation of the [Iran deal] and [the United States] should know that the Islamic Republic will definitely react to it.”

“[Kerry] is proud of the deal and started out by saying so,” said Senate Minority Whip Dick Durbin, D-Ill., who organized the meeting. “We're coming up for a vote on sanctions, and he gave us thoughts on that. We're concerned about what happens in the next election in Iran, which is coming up soon, and we hope that the forces in Iran that are working toward moderation” will be victorious.

A dozen or more Senate Democrats attended the meeting, along with at least two House members who won election to the Senate this month: Tammy Duckworth, D-Ill., and Chris Van Hollen, D-Md.

Durbin and others said the main thrust of Kerry's visit was to give lawmakers the lay of the land around the world ahead of the Donald Trump administration. Lawmakers were reluctant to divulge specifics from the classified meeting, but made it clear that Kerry argued that President Barack Obama had launched foreign policy initiatives worth preserving during his eight years in office.

“He made a very strong case for continuing to work hard on maintaining the structure of the Iranian nuclear deal, climate change goals which we have set for ourselves and for the world and many other issues,” said Sen. Ed Markey, D-Mass., a member of the Senate Foreign Relations Committee.

Earlier in the day, Kerry made a similar appeal during a speech before a women’s foreign policy forum. In those public remarks, he urged the incoming administration to stay the course on everything, from the Iran deal to overtures to Cuba and international trade deals, including the Trans-Pacific Partnership, which Trump has vowed to pull out of.

“Now, I know that some people have said that Iran is such a huge threat we shouldn’t even have attempted to do that — that we should have passed up the best chance we had for the international community to come together and block each and every one of Iran’s pathways to a nuclear weapon,” Kerry said at the forum, according to The Washington Post. “To me, that argument just doesn’t compute.”

More broadly, Kerry said at the forum, “Success doesn’t require a change in direction, but instead bigger strides down the road that we’re already on.”

While that message may resonate with many Senate Democrats, it likely will not be enough to prevent passage of the Iran Sanctions Act. Last month, seven Democrats who voted for the deal last year wrote to Senate Majority Leader Mitch McConnell, R-Ky., to urge him to schedule a vote on the bill, arguing that it strengthens the deal by giving the White House an “unambiguous ability to immediately snap back sanctions in the coming years.”

Senate Republicans have vowed to move ahead with the vote this week, and senators and staff leaving the meeting with Kerry said the deal was likely doomed anyway if it can't withstand a largely symbolic extension of sanctions authorities.

“Preserving these sanctions is critical given Iran’s disturbing pattern of aggression and its persistent efforts to expand its sphere of influence across the Middle East,” McConnell said on the Senate floor Tuesday. “This is all the more important given how the administration has ignored Iran’s overall efforts to upset the balance of power in the greater Middle East, and how it has been held hostage by Iran’s threats to withdraw from the nuclear agreement.”