Although Iran and the United States have been in a near-constant state of hostility over the past 3½ decades, it is still unclear whether the United States is technically an "enemy state" according to Iranian law. 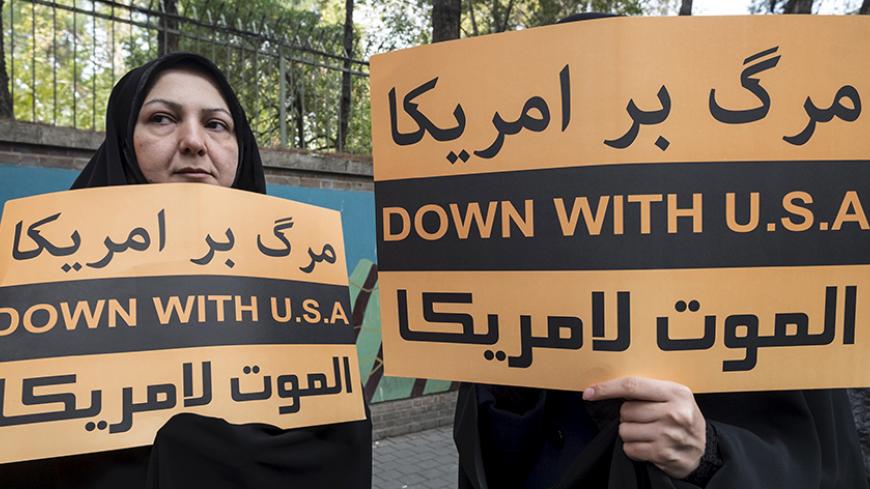 Women hold anti-US banners during a demonstration outside the former US Embassy in Tehran, Iran, Nov. 4, 2015. - REUTERS/Raheb Homavandi/TIMA

On Oct. 18, Mizan, the Iranian judiciary's news agency, reported that Iranian-American businessman Siamak Namazi, who has been held for more than a year, and his father Baquer, who was detained in February, had both been sentenced to 10 years in prison. Their offense, as announced by Tehran's Prosecutor General Abbas Jafari Dolatabadi, was "collaboration with the hostile US government." According to the same report, Nizar Zakka, a Lebanese national and permanent US resident, who was detained after traveling to Tehran for a conference in September 2015, also received a 10-year prison sentence over similar charges.

In August, nuclear scientist Shahram Amiri, who disappeared in Saudi Arabia in 2009 only to reappear in the United States in 2010 and then returned to Iran, was executed on the charge of treason. Judiciary spokesman Gholam-Hossein Mohseni Ejei told reporters at the time, "Amiri had access to top secret information about the Islamic Republic of Iran and was linked to Iran's No. 1 enemy, the United States. … Amiri had provided the enemy with vital information about Iran." Separately, in May 2012, physicist Omid Kokabee was sentenced to 10 years in prison on the charge of having "contact with enemy states."

Article 508 of Iran's Islamic Penal Code states, "Anyone who cooperates by any means with foreign states against the Islamic Republic of Iran, if not considered a mohareb [enemy of God], shall be sentenced to 1-10 years’ imprisonment" (moharebs are subject to the death penalty). This article formed the basis of the sentences given to Amiri, Kokabee and the Namazis. Whether they are truly guilty is under the exclusive jurisdiction of the relevant courts. The key question is whether it is possible to use legal terminology in a nonspecific manner. The majority of legal experts say it is not possible.

The word "belligerent" can be applied to any unfriendly or hostile act, as interpreted by some judicial authorities in Iran. But the terms "belligerence" and "belligerent state" have distinct definitions in international law. Black’s Law Dictionary, the Oxford Public International Law and Encyclopaedia Britannica, all of which are globally recognized references, define belligerency as a state of being engaged in actual war or conflict. US legal cases such as the United States v. The Ambrose Light (1885) and Johnson v. Capital One Bank (1995) have confirmed this definition.

Moreover, Article 2 of the 1949 Geneva Convention (IV), which relates to the protection of civilian persons in time of war, states, "The present Convention shall apply to all cases of declared war or of any other armed conflict which may arise between two or more of the High Contracting Parties, even if the state of war is not recognized by one of them." As such, a belligerent state is one that enters war with another country, regardless of the intensity of the conflict or whether both sides have officially recognized the state of war. The key point is the engagement in actual conflict.

The term "war" also has a distinct definition, referring to a state where the warring parties have resorted to arms in order to destroy one another. The 1974 UN General Assembly Resolution 3314, known as the "Definition of Aggression" resolution, further supports this interpretation. Thus, any armed aggression has two aspects: a material element and a moral element. The moral aspect refers to either party's goal of using aggression as a means of advancing their political agenda, while the material aspect refers to the use of arms in order to inflict a blow to the other side. Therefore, terminology such as "soft overthrow" and "soft war" are not applicable to the term "belligerent" in international law.

At the top of Iran's power structure is the supreme leader, and based on Article 110 of the constitution, he alone can declare war or peace. As to who can pronounce a state as being belligerent, there is no mention in Iran's key legal sources. However, based on Article 25 of the Law of the Punishment of Crimes of the Armed Forces, "Any time a court is unable to identify a state as being an enemy or belligerent state, the judiciary will make an inquiry from the Supreme National Security Council [SNSC] and use the council's view as the benchmark." Thus, in such a situation, the SNSC — which based on Article 176 of the constitution is headed by the president and supervised by the supreme leader — will be the competent organization for declaring belligerency between the government of Iran and that of a foreign country.

Although there are many statements by Iran's supreme leader in which he has referred to the Untied States as an enemy, none have been recognized by relevant organizations as falling within the definition of an "enemy state" in Article 2 of the 1949 Geneva Convention. Also, appropriate legal measures need to be taken by the Iranian government and parliament to make the term "enemy" equivalent to "belligerent" — none of which have been taken until now.

Considering that foreign policy and international relations are among the responsibilities of Iran's executive branch, according to Articles 125, 128, 155 and 152 of the constitution, it would seem that in such a situation, designating the term "belligerent" — even within the framework of the definition given in Article 508 of the Islamic Penal Law and Article 25 of the Law of the Punishment of Crimes of the Armed Forces — to a foreign state is something that should be done officially and by the top figure in the political establishment and the top executive authority. Therefore, if an individual ventures to designate another state as belligerent, given the distinct definition of this term in both international and domestic law, it will be viewed as going against the power structure (according to Article 57 of the constitution) and maintaining peaceful relations with nonwarring states (according to Article 152).

In a statement issued in December 2013, the Iranian Foreign Ministry's international law department stated that Iran does not recognize any state as an "enemy" — except for the "occupying Zionist regime," which it does not recognize.

There is consensus among various political factions in Iran that the US government has engaged in a number of hostile acts against the Islamic Republic. The crippling sanctions, and perhaps most recently the US Supreme Court's April 20 ruling authorizing confiscation of $2 billion of Iranian assets, are some of the latest examples of this hostility. However, these measures are often labeled by high-ranking Iranian officials as hostile and not belligerent. Indeed, in a 2014 interview with a Swiss TV channel, Iran's President Hassan Rouhani said that it is possible to turn more than three decades of "enmity with the United States" into friendship if both sides make an effort.

It is unlikely that Rouhani's use of the term "enmity" with respect to US-Iran relations conforms with the definition of belligerence in international law. Thus, ultimately, the question of whether the United States can legally be referred to as a belligerent state in Iran continues to remain unclear given the ongoing dispute about the matter between some of the judicial authorities and legal experts vis-a-vis the executive branch.

The main reason Rouhani replaced three of his ministers