The Russian-Iranian alliance that wasn't

Collaboration between Iran and Russia on regional matters is growing, but there are still major obstacles to a true Russian-Iranian alliance. 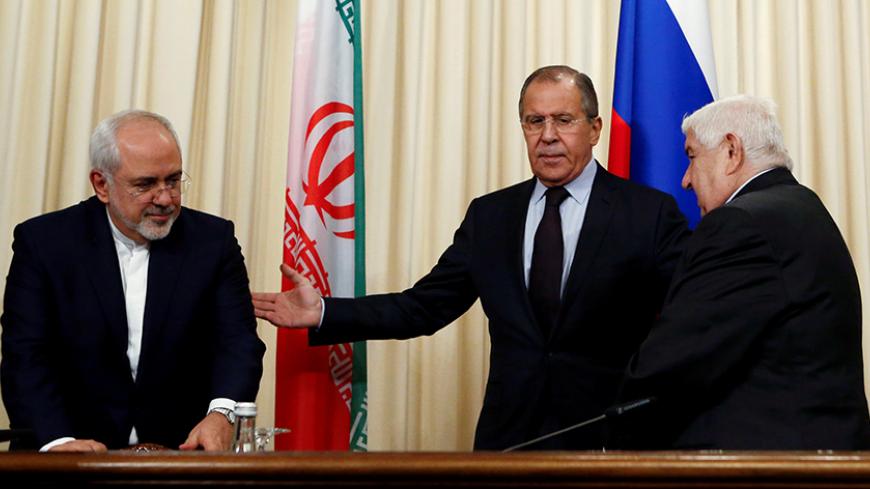 Russian Foreign Minister Sergey Lavrov on Oct. 28 in Moscow hosted his Iranian and Syrian counterparts, Mohammad Javad Zarif and Walid Moallem, respectively, to discuss the latest developments regarding Syria and to coordinate action to resolve the crisis there. The meeting, the latest sign of Russian-Iranian cooperation and coordination on Syria, took place as debate on the nature and level of Tehran-Moscow relations and the prospect of the presently close relationship continuing has again been raised in the media. In another sign of warming relations between the two countries, it was announced Oct. 24 that Russia plans to lift visa requirements for Iranian citizens. Furthermore, Russia has over past months declared its willingness to back Iran’s full membership in the Shanghai Cooperation Organization and to increase cooperation between Iran and the Eurasian Economic Union. Given these developments, one key question is whether it is possible to speak of an “alliance” being formed by Iran and Russia.

At the international level, it could be argued that a major part of Moscow’s current foreign policy conduct stems from its confrontation with the West, especially the United States, that began in 2014 over the Ukraine crisis and has since been intensifying over other heated issues, such as Russia’s military campaign in Syria and NATO’s plans for further eastward expansion. Within this context of being under pressure by the West, Russia has been trying to increase its weight in international equations and balance against the United States by putting itself at the center of a series of counter-hegemonic bilateral and multilateral partnerships, building cooperation and partnerships with a range of regional and global powers.

Russia's agenda on its eastern front therefore includes cementing ties with China, and in South Asia, expanding and reinforcing relations with India. Meanwhile, at the institutional level, Moscow is trying to further activate and reinvigorate the Shanghai Cooperation Organization and the BRICS.

Iran, as a regional power in the Middle East, could be part of Moscow's strategy of partnerships and cooperation, but this very notion means that for Russia, the development of relations with Tehran has an exogenous and passive logic, rather than an endogenous and active one. At the regional level, and in connection with the abovementioned points, it should be noted that in the Middle East, Moscow’s attempts to counter the United States have not been limited to developing ties with Iran. Although Russia has at present, and on a critical issue such as Syria, comparably the most expansive ties with Iran, it is also trying to develop relations with other important players in the region.

In the latter vein, following the of normalization of relations with Turkey this fall, the two countries have been rapidly moving toward regional cooperation. Furthermore, over the past few months, Egypt has also been slowly but visibly moving toward Russia, with the two sides reaching economic and military agreements. At the same time, Moscow has been serious about improving relations with Riyadh, at least in the economic sphere. When it comes to Turkey and Saudi Arabia, both regional rivals of Iran, the path being pursued by Moscow is not in line with Tehran’s interests. As such, this shows that Russia’s approach toward Iran is not as unique and special as it may seem, but rather first and foremost is driven by the logic of creating a balance on the international stage with the aim of improving Moscow’s global standing.

At the bilateral level, apart from regional cooperation, especially regarding Syria, the Russian-Iranian relationship lacks a strategic dimension, thus effectively precluding an alliance. The Syrian crisis serves as an important example of this dynamic.

The main reason for Russia’s decision to become militarily involved in Syria was its desire to secure its bases in western Syria that guarantee it access to the Mediterranean Sea. In other words, to Moscow, the relationship with Damascus has an obvious geopolitical dimension and is directly related to its “hard” interests. In the case of Russia’s relations with Iran, however, ties have so far been limited to economic exchanges, the arms trade and, at the highest level, cooperation in the sphere of nuclear technology. For Russia, however, none of these areas of collaboration are considered strategic or non-negligible interests.

Thus, it could be argued in general that what Russia has so far been trying to achieve through its Middle East policy is obtain US recognition of its role and interests as an equal. If Russia can achieve this primary objective by establishing a successful balance of power or by another means — such as some form of compromise — its approach toward its international partnerships will change or at least result in a slower pace for the development of such partnerships.

Under these circumstances, the Russian-Iranian relationship can only move toward a serious partnership or an alliance by either being institutionalized through genuine Iranian engagement with Russian-centered regional initiatives, such as the Eurasian Economic Union, or by expanding the level of bilateral cooperation to a more structured relationship in “harder” political and security spheres, such as the signing of a mutual security agreement with certain conditions and promises. As such, given Moscow’s current foreign policy approach, if Iran really wants to elevate the level of its bilateral relationship with Russia, now is the best time to do so. If not, Iran should have in place alternative plans for the day when regional and international circumstances change.