Only days after the US House voted against the Boeing and Airbus deals with Iran, the US Treasury issued a second license for Airbus to sell 106 aircraft to Tehran. 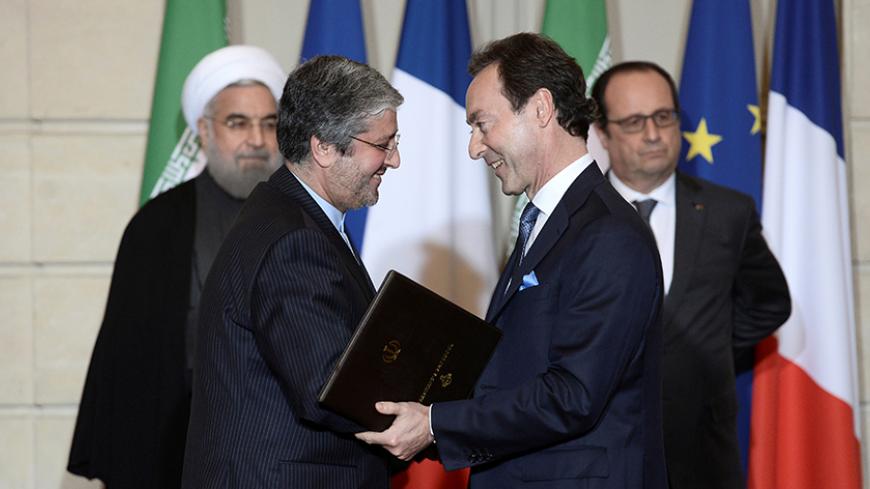 After the United States issued a second license to Airbus to sell 106 planes to Iran on Nov. 21, the French aircraft manufacturer once again made headlines in Iranian media on Nov. 23. The US government’s green light to the agreement is a result of the nuclear deal, which lifted nuclear-related sanctions on Iran in return for curbs on its nuclear program.

On Sept. 21, Airbus announced that an application to sell 17 airplanes to Iran was approved by the US Department of Treasury’s Office of Foreign Assets Control (OFAC). Although Airbus is based in France, it must obtain OFAC approval to sell planes to Iran because at least 10% of the components used to build the planes are made in the United States. Airbus’ first application for a license to sell passenger jets was for the jets Iran most urgently needs. Tehran is determined to breathe new life into its aging fleet. On the same day, US aircraft manufacturer Boeing received authorization by OFAC to sell 109 passenger jets to national carrier Iran Air.

On Nov. 23, Shahrvand daily ran the article “106 Airbus [jets] on the way to Iran,” which reported the new development to boost trade between Western companies and Iran. “Despite the attempts by the US House to revoke the permission [to sell aircraft to Iran], a delegation from Airbus is now in Tehran to finalize the deal between Iran and the aviation company,” wrote Shahrvand.

Meanwhile, business daily Abrar-e Eqtesadi said that Iran had reached an agreement with an international leasing company to facilitate the purchase of 77 Airbus planes. According to the daily, Asghar Fakhrieh Kashan, the deputy for international affairs at the Ministry of Roads and Urban Development, announced, “The final contract to buy 112 Airbus [jets] is ready to be signed.”

Iran provisionally agreed to purchase 118 Airbus jets in January. This figure dropped to 112 after an order for six smaller Airbus jets was discarded over delays in OFAC licensing of the sale. The final number of plane deliveries may be around a hundred, given that Iran says it may not proceed with its option to purchase a dozen A380s, the world’s largest jetliner.

The news about reaching a financing deal with a foreign leasing company is a breakthrough in efforts by Iranian companies to ink contracts with a major international firm. One of the main obstacles keeping international banks and business away from Iran is the ongoing hassle of transferring money to and from Iran due to remaining Western sanctions. Iranian officials have not disclosed the name of the leasing company, but industry sources have previously said that Iran has asked United Arab Emirates company Dubai Aerospace for assistance with financing the purchase of the first 17 Airbus jets.

“If Airbus had changed its mind about signing an agreement with Iran, it would not have sent a delegation to Tehran,” Fakhrieh Kashan said. “With the incoming US administration, there might be a possibility that Boeing accepts the pressures to revoke its agreement with Iran. By contrast, Europeans have showed that they have different stances.”

On Nov. 23, Iranian Supreme Leader Ayatollah Ali Khamenei voiced objection to the US House's recent vote to renew the Iran Sanctions Act. “The current US government has committed several violations of the nuclear agreement. The most recent [violation] is the 10-year extension of the sanctions,” he said. “If these sanctions are extended, [the United States] should know that the Islamic Republic will definitely react to it.”

In the United States, opponents of aircraft deals with Iran point out that the US Treasury imposed sanctions on Iran Air in 2011 for allegedly using passenger and cargo planes to transport military-related equipment to countries such as Lebanon and Syria. The claim was raised again on Nov. 22 by Israeli Ambassador to the United Nations Danny Danon.

On Nov. 23, Iranian Ambassador to the UN Gholamali Khoshroo denied Danon’s claims in a letter to UN Secretary-General Ban Ki-moon. “I find it quite ridiculous and hypocritical that the representative of a regime that has deprived Palestinian people from their basic human rights for several decades accuses Iran every once in a while of violating international law.”