A middle-aged Egyptian woman finishes the Ironman Barcelona triathlon and has many other goals, including running in next year's Boston Marathon. 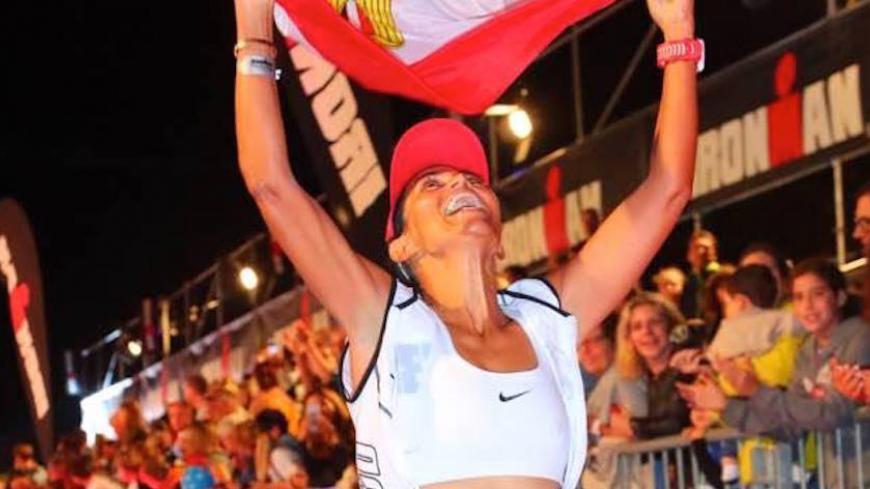 Egypt's 50-year-old triathlon athlete Amany Helmi Khalil said that she had blazed a trail for both women and older people passionate about sports after becoming the first female from her country in such an age category to complete the Ironman Barcelona triathlon in Spain last month.

Khalil, who is a mother of two, came in 21st in the 50-54 age category for women in the triathlon after competing with women and men from all over the world who were mostly in their 20s and 30s. "I hope that the accomplishment I made in Barcelona last month will pave the way for other women and older people to practice sports and win competitions," she told Al-Monitor. "Nothing can stop anyone from practicing sports — it is never the age nor the gender," she added.

The Ironman Triathlon is one of a series of long-distance triathlon races organized by the World Triathlon Corporation (WTC). It consists of a three-stage competition involving a 2.4-mile (3.86-kilometer) swim, a 112-mile bicycle ride and a 26.22-mile marathon run without a break. This high endurance sport is considered one of the most difficult one-day sporting events in the world. Most Ironman events have a strict time limit of 17 hours to complete the race.

Khalil said that the competition is tough, but that she prepared herself well for the triathlon. "I trained for 10 months and three to four hours a day before entering the competition. I have also been in other marathons and triathlons many times and got used to completing them. Many people think that older people cannot compete in such tournaments. In fact, it is difficult in the beginning, but when you get older, more experienced and have practiced a lot, it really becomes easier," she added.

Khalil also attributes her high-level endurance to the food she consumes. She eats lots of vegetables and fish and a little chicken and other meat. She avoids dairy products, sugar and sweets. "The body organs have to be functioning well in order for anyone to do sports. And taking good care of the things I eat is what keeps me fit and healthy," she said.

Khalil, who is a business administration graduate of the American University in Cairo and a banker, never knew that she would become an athlete. Encouraged by her mother, who was also a banker, Khalil worked for one of Egypt's biggest banks and later a major US financial services corporation upon her graduation. "I was not satisfied. It was too boring and it was full of routine work. I was waiting for an opportunity to quit," she said.

The opportunity came when Khalil traveled to the United States with her husband, who was studying for his master's degree and Ph.D. in accounting. The then-young woman was also seeking to pursue her studies, but got pregnant with her first child. She stayed at home, but then started going to daily aerobics classes and doing morning runs.

A friend of hers suggested she participate in a US 5-kilometer run. "I participated … and I came in sixth. Then I began to run in longer races until I ran a full marathon just a month before I left the US," Khalil said.

She became certified in aerobics in the United States, and when Khalil returned to Cairo, she started to give aerobics classes. "The timing was perfect because I was able to give classes after I took my children to school. I went for a run in the morning, did the class and then was back for lunch and ready to be with my family at night," she said.

In 2003, Khalil competed in the Luxor Marathon and came in third. Between 2003 and 2014, she participated in a marathon every year with a running group called Maadi Runners. In 2014, Khalil took part for the first time in the Ironman competition, but she was disqualified. She was not fully aware of the rules at the time and could not keep an eye on the cutoff time. In the same year, she decided to do a triathlon in Hurghada, which consisted of a 1.5-kilometer swim, a 40-kilometer bicycle ride and a 10-kilometer run. In December, Khalil will participate in a triathlon in Sahl Hasheesh, a bay on the Red Sea south of Hurghada. In April, Khalil will compete in the Boston Marathon.

In recent years, a procession of young and older runners, male and female, can be seen in Cairo's streets. The running usually elicits stares and harassment, and the runners also have to face dirty air, extreme heat and bumpy roads. However, the sight keeps becoming more common in Egypt.

The majority does not usually practice sports in this Arab country. But recently, some groups led by young people such as Cairo Runners and Maadi Runners have started taking to the streets, especially on Fridays and Saturdays when the city is usually calm. "Now, more and more people in Egypt are practicing sports. It is actually a cure and it can be the perfect treatment for all our social, political and economic problems," Khalil said. "Sports also foster morals. It also encourages innovation as whenever there is a healthy body there is a healthy mind," she added.

Khalil has two sons who are also into sports. The elder, Mohamed, likes running while the younger, Ahmed, prefers swimming. The two young sons will compete with their mother in the Hurghada triathlon next month. "My family has always been a driver for me. They have supported me all through my sports career." Khalil's husband and two sons traveled with her to the Ironman Barcelona to encourage her to win the race.

Khalil's aspirations are lofty. She is now focusing on the Boston Marathon, but also has plans that extend out a decade. "Maybe after 10 years when my sons get married and have children, I will do it again and be the first [Egyptian] grandmother to complete the Ironman competition," Khalil said. "I do not rule this out. It can happen one day," she added with a laugh.