Prime Minister Benjamin Netanyahu's speech at the opening of the Knesset's 2016 winter session was focused on the wonderful situation of Israeli citizens while ignoring the Israeli-Palestinian conflict and growing disparities within Israeli society. 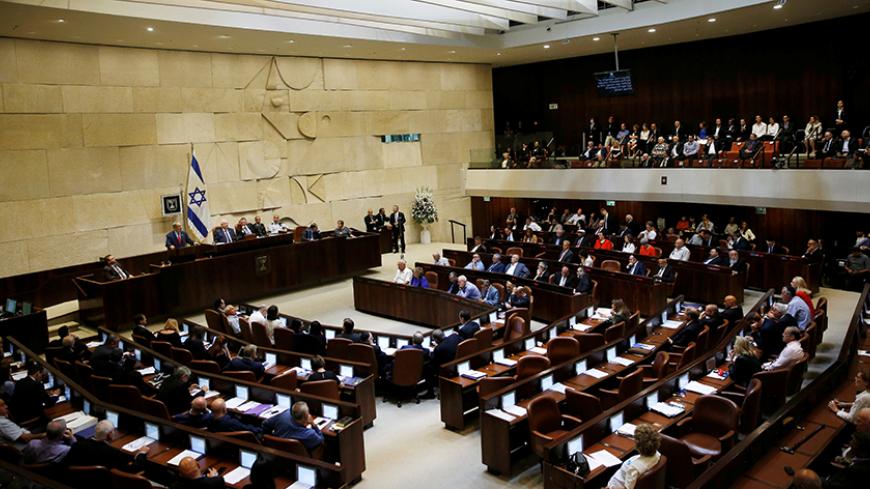 A general view shows the plenum as Israel's Prime Minister Benjamin Netanyahu speaks at the opening of the winter session of the Knesset, the Israeli parliament, in Jerusalem, Oct. 31, 2016. - REUTERS/Ronen Zvulun

Israeli Prime Minister Benjamin Netanyahu's speech Oct. 31 to mark the opening of the Knesset's winter session will be remembered for the headline it produced: The prime minister plans to "rehabilitate" the Israel Broadcasting Authority — that is, to cancel the scheduled January inauguration of the new Israel Broadcasting Corporation, which was designed to replace the Israel Broadcasting authority. The speech set another milestone in the ongoing public and media uproar over the future of public broadcasting in Israel.

Yet the statement describing his intentions on public broadcasting barely took up 20 seconds from a speech that lasted about half an hour. Were the broadcasting issue not such a hot public potato, the speech probably could have used a better title such as "Why are Israelis so happy?"

Every autumn, the Knesset returns to work after a long summer break. The highlight of its festive opening session is a speech by the prime minister, who covers all that the government has done over the past few months, and what it plans to do next. Attending the event are the president of Israel and other prominent members of the Israeli government, including the chief justice of the Supreme Court. Even senior diplomatic staff are invited to fill the Knesset gallery.

This was the seventh consecutive year since his return to power in March 2009 that Netanyahu addressed the Knesset's opening session. This speech, however, was unlike any of the prime minister's previous speeches, which dealt with diplomatic, security and economic issues, such as negotiations with the Palestinians, the struggle against Iran's nuclear program and economic reforms. On Oct. 31, Netanyahu made absolutely no effort to offer his listeners something new. Instead, he used his lengthy speech to provide a basis for his thesis as to why Israelis are (allegedly) happy. Netanyahu did this using figures and other data that he collected and by rebutting unflattering stories about Israel in the media, mocking predictions that proved false in order to strengthen his claims.

The prime minister's speech was a direct continuation of his talks with senior Israeli journalists, who were invited to his office over the past few months. What was different this time was that Netanyahu seemed to want to etch reality as he sees it into the consciousness of all Israelis. In Netanyahu's parallel universe, the situation of Israel has never been better. It is a stalwart democracy, a military and economic power and its hand remains extended in peace, even if there is no one there to shake it. In Netanyahu's world, the left-wing media (in his opinion) and his political rivals refuse to recognize his greatness and even insist on creating what he describes in his speech as the "commerce of despondence," whereas he is behind the "commerce of happiness."

How does he know that? Because Israelis gave themselves quite a high ranking on the Happiness Index for 2016 of the Organization for Economic Cooperation and Development. Remaining loyal to his thesis, Netanyahu also chose to ignore the social polarization that he and several of his ministers have been exacerbating. Evidence of this can be found in poverty rates and the disparities between rich and poor. In both of these indicators, Israel has a high ranking as well.

Netanyahu also bandied about the idea that Israel is the only democracy in the Middle East. On the other hand, he ignored the fact that he is doing everything he can to crush the free press and subject it to his whims.

He also chose to ignore the elephants in the room, namely, the conflict with the Palestinians and the ongoing wave of terror acts committed by Palestinian individuals. Both of these are still alive and kicking. The fact of the matter is that Netanyahu no longer feels any obligation whatsoever to update Israelis about the active measures he is taking to move the diplomatic process forward. Even if (as he says) there is no one to talk to, the prime minister is the one who keeps saying that progress can be made with the moderate Arab states. In that case, don't Israelis deserve to hear about the latest developments, beyond a barrage of insipid statements?

In his eighth consecutive year as prime minister, Netanyahu is so sure of himself that he does not bother to convince Israelis that he is working to resolve the conflict with the Palestinians. Unlike previous years, however, in which he at least bothered to lay out some empty plan or other, or to engage in tactical moves such as a freeze on settlement construction, once the 2015 elections gave the Likud 30 seats, the Israeli prime minister has come to see himself as being relieved of this duty.

In order to better understand Netanyahu's evolution, it is worth looking back at his earlier speeches to mark the opening of the Knesset's winter session. In all except the last, the prime minister offered a kind of diplomatic and economic account of his achievements, and accompanied his remarks with declarations about what the future holds in store. As the years passed, these declarations, mainly about the Palestinian issue, became more generalized and less committal, until his most recent speech, when they disappeared entirely — except for a very brief and incidental comment about how he extends his hand in peace to Palestinian President Mahmoud Abbas.

A review of past winter session opening speeches also gives a general political perspective: Major parties collapsed (such as the Kadima party), new parties (Ha'atzmaut, Yesh Atid, Hatnua, Kulanu) were founded and coalition partners came and went. For example, current Defense Minister Avigdor Liberman (Yisrael Beitenu) was a partner in a previous Netanyahu government but then became a stringent member of the opposition, only to become a senior coalition partner again in the last half year. All that really remained intact has been Netanyahu, with his speeches every autumn, from one October to the next.

In October 2010, after about one and a half years as prime minister, Netanyahu devoted most of his speech to negotiations with the Palestinians and his willingness to make painful concessions. Sitting in the plenum, nodding along, was Defense Minister Ehud Barak, then still chairman of the Labor Party. At the time, Israel had imposed a freeze on construction in the settlements in the wake of Netanyahu's two-state speech at Bar-Ilan University in June 2009.

In October 2011, just a few months after the Arab Spring erupted, Netanyahu's speech was devoted to regional developments. In 2014, after Operation Protective Edge, Netanyahu gave a glowing description of the regional diplomatic opportunities that had opened up before Israel and which, he said, could help find a solution to the conflict with the Palestinians. In the autumn of 2015, Netanyahu focused on the intifada of individuals and international Islamic terrorism.

Given all of that, it is hard to ignore the distinguishing characteristics of his last speech. Netanyahu began with the failed 2009 prediction that appeared in the British weekly The Economist, which said that the regime in Tunisia was in no way over with. "Within half a year it was over with," Netanyahu laughed. He then went on to settle accounts with the magazine Newsweek, which determined that very same year that Syria would be the next economic miracle. "Well," Netanyahu concluded, "it didn't happen in Syria or Tunisia. It happened right here in Israel."

Later in his speech, Netanyahu settled the score with other predictions made by the media in Israel and around the world. It was as if he was acting as a journalism critic, and not delivering a speech as the prime minister of his country. In the autumn of 2016, Netanyahu looked and sounded like a slick marketer, fighting to persuade Israelis to close their eyes and realize how happy they are.