Prime Minister Benjamin Netanyahu opened the new Knesset session with recycled messages on Iran, saying little about negotiations with the Palestinians or social and economic issues. 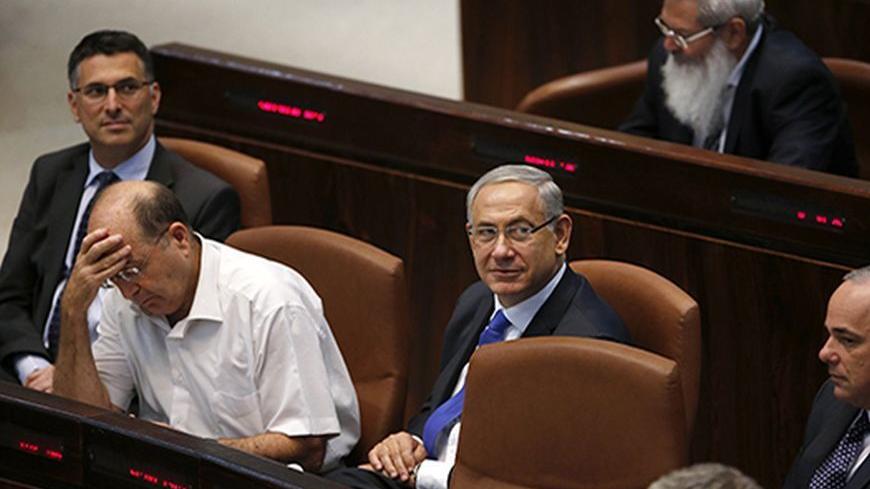 Israel's Prime Minister Benjamin Netanyahu (C) sits after speaking at the opening of the winter session of the Knesset in Jerusalem Oct. 14, 2013. - REUTERS/Ronen Zvulun

“The more time passes, the more I am convinced that there is nothing to worry about. Bibi [Prime Minister Benjamin Netanyahu] simply lacks the courage to make any major diplomatic move.” I was told this yesterday, Oct. 15, by a Knesset member from the Likud — one of the leaders of the party's hard-core ideological right wing — when I raised the possibility that he and his colleagues were falling asleep on their watch, and that the outline for an agreement with the Palestinians could be coming together right under their noses.

Our conversation took place in the Knesset, shortly before Netanyahu delivered his speech at the start of the Knesset's winter session. His speech referred only in a marginal, general and noncommittal way to the diplomatic negotiations. The Knesset member I spoke with and his colleagues in the Likud faction really did have nothing to complain or worry about.

The diplomatic center of gravity of Netanyahu's speech was, as expected, Iran. The prime minister more or less repeated the same familiar texts from his recent speeches to the United Nations General Assembly and at Bar Ilan University. It was only toward the end of his remarks that he referred to the negotiations with the Palestinians that were relaunched three months ago.

“We are making real efforts to bring an end to the conflict between us and the Palestinians,” said Netanyahu, without telling us anything new. “I do not fool myself into thinking that it will be easy, but I am determined to try. At the same time, I will not abandon our vital interests in exchange for a positive newspaper headline or commendations from the international community.”

Apart from some heckling by Arab Knesset members, who called the prime minister a warmonger with no real plans to make peace, the diplomatic opposition to Netanyahu from the left seemed indifferent and worn out.

The prime minister failed to outline an agenda, and he did not present any practical plan. He recycled the same agenda about Iran that he has been using for the past few years without making any significant statement concerning the diplomatic or socioeconomic fields. The overall feeling from his speech was that Netanyahu lacks any vision or action plan for the next few years, apart from his ongoing war against Iran's nuclear program.

Throughout the ceremony in the Knesset, one could not help but be reminded of the former chair of the opposition, Tzipi Livni. During Netanyahu's four last years of his previous term, she offered a sharp critique of his actions during each opening session of the Knesset. Livni is now the head of a new party and minister of justice in Netanyahu's government. She also conducts the negotiations with the Palestinians on his behalf behind closed doors, so that almost no politicians have any ideas about its content.

If there is anything to learn from this about what to expect from the Knesset over the next few months, it is that we are facing one of the bleakest and lacking of vision sessions we have seen in the past few years. And if we are to draw any conclusion on the basis of this utter lack of enthusiasm and the absence of any fighting spirit in the Knesset chamber, it would be that the “new politics” in Israel, a phenomenon that is barely 10 months old, seems just as exhausted and worn out as if it had been with us for years.

No one in Israeli politics lives under the illusion that some group in the opposition will succeed in challenging Netanyahu's coalition: The Ultra-Orthodox party Shas is trying to get used to life without the party's leader, Rabbi Ovadia Yosef, and to survive intact from the internal battles over the succession. As the chief opposition party, Labor is busy with its own leadership battles, while the primaries scheduled Nov. 14 rapidly approach.

Nonetheless, if there is any challenge to Netanyahu's third government, it will apparently come from within. One possible scenario that could shake up the coalition would be the possible acquittal of former Foreign Minister Avigdor Liberman on Nov. 6, after a trial in which he was charged with fraud and breach of trust. If Liberman is absolved after this long and drawn-out episode, he could well lead the Yisrael Beiteinu faction to part ways with the Likud. Another scenario is that of a diplomatic progress, despite all current assessments to the contrary. This would lead to an internal struggle within the ruling party.

In contrast to this barren diplomatic wilderness, the opening ceremony of the Knesset's winter session did provide socioeconomic headlines, but even these were not initiated by the prime minister. As chair of the Labor Party and chair of the opposition, Knesset member Shelly Yachimovich was the only person who managed to introduce a relevant agenda. Yachimovich made a commitment to fight on behalf of Teva Pharmaceuticals' employees in Israel, 800 of whom could be laid off due to a cutback plan by the company.

Speeches about social issues are always beneficial to the chair of the Opposition. She is very focused. She chooses her words carefully, and she is sharp.

“This is an attack with mass casualties. You are their prime minister!” she called to Netanyahu while discussing the cutbacks at Teva. The prime minister tried to ignore her presence. The one person who could not ignore her words was Finance Minister Yair Lapid. In his speech, he said he spoke to Teva's CEO, Jeremy Levin, and expressed his “deep unease over the planned layoffs.”

The very fact that Netanyahu made no references in his speech to the anticipated layoffs in Teva and the Bazan Refinery indicates how out of touch he really is. It shows us that he is incapable of spearheading an agenda on any issue whatsoever. Netanyahu may be the prime minister, but the significant headlines at the festive opening ceremony of the Knesset's winter session were provided by the chair of the opposition and the minister of finance.