The Iraqi parliament's ban on the production, import and sale of alcoholic beverages of all kinds has raised a broad protest among religious minorities, individuals and civil societies. 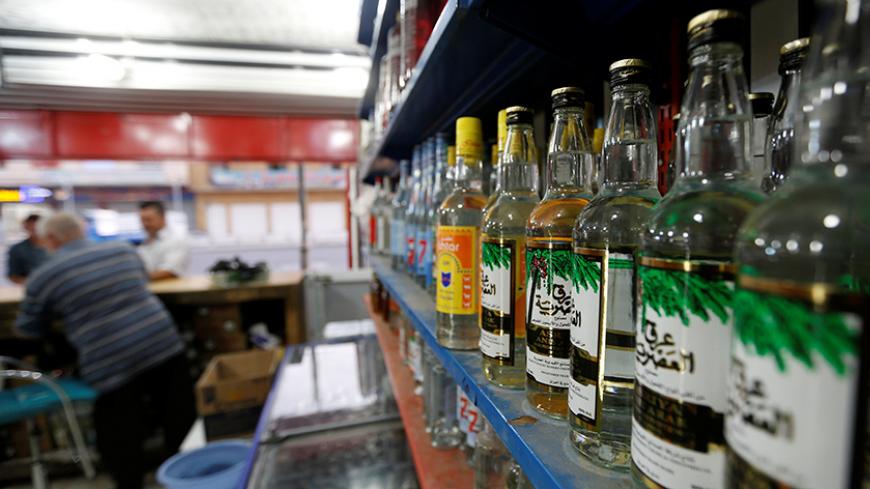 BAGHDAD — The Iraqi parliament's surprise decision to ban alcohol is raising challenges from many quarters, both for the law's content and the way it was passed. Some critics also say politicians intend to use the ban to their advantage on the black market.

While the rest of the country was focused on the fierce military battle to drive the Islamic State (IS) from Mosul, the Iraqi parliament declared its own war by passing the new law Oct. 23, banning all production, imports and sales of alcoholic beverages of all kinds. The law stipulates that violators will have to pay a fine of no less than 10 million dinars ($8,500) and no more than 25 million dinars ($21,000).

Iraq is an Islamic democracy. The new law's supporters say it aligns with the Iraqi constitution, which forbids passage of any law that contradicts Islam. Some opponents, however, note that the constitution also provides for protection of religious minorities' rights and customs. Parliament member Yonadam Kanna said he will appeal parliament's action to the federal court as being contrary to the constitution and personal freedoms.

The debate revolves around three main points: non-Muslim minorities’ fear of the Islamization of the state, controversy over the relationship between religion and state, and attempts by parties of political Islam to control the black market for alcohol.

Journalist Ali Hussein's Oct. 24 column posted on al-Mada news site ran with the headline, "Parliament decides: No place for Christians in Iraq." In it, he summarized how Christians and other minorities view the message behind the new law.

Joseph Sylawa, a Christian member of parliament with the Warka bloc, told Al-Monitor the ban on alcohol is part of a war against religious minorities that aims to force them out of the country through exclusion, marginalization and harassment policies.

Others also challenge the law.

"This is an unprecedented, dangerous and controversial law," said Mona Yako, a law professor at the University of Salahuddin in Erbil and an activist defending the rights of minorities. "It is a clear indicator of the nature of the conflict between those who support applying the Islamic Sharia and those who support a civil state."

Some activists believe the law is a step toward the Islamization of a state that was destined to be a pluralistic model in the Middle East.

Abbas Sharifi, a member of the Civic Center for Studies and Legal Reform in Baghdad, told Al-Monitor, “[We] are truly afraid for how the civil state, agreed upon in the constitution, is going to be. [We] fear this tight grip on personal freedom would be a prelude toward altering the state’s laws to apply Sharia law, such as in Saudi Arabia and Iran.”

Dia al-Shukurji, a former Dawa Party leader, focused on the role of Sharia, which the constitution stipulates as the primary source of legislation. He told Al-Monitor, “We knew how critical this [point] was. Ever since the [current] constitution was first written [in 2005], it was obvious that it was going to [be the grounds for] constant conflicts with those who support the Islamization of the state.”

Shukurji, who was a member of the committee that wrote the constitution, was one of the first to object to including the stipulation. According to his memoirs, “A Quarter of a Century with Political Islam,” his opposition led to his resignation from the ruling Islamic Dawa Party.

He said the timing of the law is suspicious in that it coincided with the Supreme Council of Islamic Awakening conference held Oct. 23 in Baghdad. "The conference was held under the auspices of [Iranian Supreme Leader Ayatollah] Ali Khamenei's representative and adviser Ali Akbar Velayati, which indicates that the conference’s goal was to stress the loyalty to Khamenei’s Islam and promote the Islamization of the state.”

Nouri al-Maliki, the former prime minister of Iraq, gave a speech at the conference that focused on the success of Islamization efforts in Iraq, while at the same time, Mahmoud al-Hassan, a member of the Maliki-led State of Law Coalition, was in parliament defending the law to ban alcohol. In his speech, Maliki stressed that Islamists working on the Islamization project must not be distracted by the wars in Iraq, Syria and Yemen.

Meanwhile, other critics are focusing on the law’s economic dimensions.

A main importer of alcohol told Al-Monitor on condition of anonymity, “The value of imported alcohol in 2015 reached over $800 million, and other quantities of alcohol were smuggled into Iraq with an estimated value of more than $300 million.”

He warned about organized crime groups associated with politicians and how they could control the black market for alcohol and make profits. He noted that the economic crisis that has been plaguing the country since the drop in oil prices has made it imperative for some parties — and the militias associated with them — to search for new sources of funding.

Faeq al-Sheikh Ali, a parliament member with the civil movement, alluded to the same point in an Oct. 25 televised conference from inside the parliament. He spoke about influential Islamic parties with affiliated militias that share the revenues of bars, nightclubs and casinos. These entities, he said, were behind passing the law and will use it to make money in the black market trade of alcoholic beverages.