Turkey hasn't given up on role in Mosul battle

While Turkish President Recep Tayyip Erdogan fumes at Baghdad for excluding Turkey from the operation to liberate Mosul, Ankara has sent a team to the Iraqi capital to continue negotiating a role for Turkey. 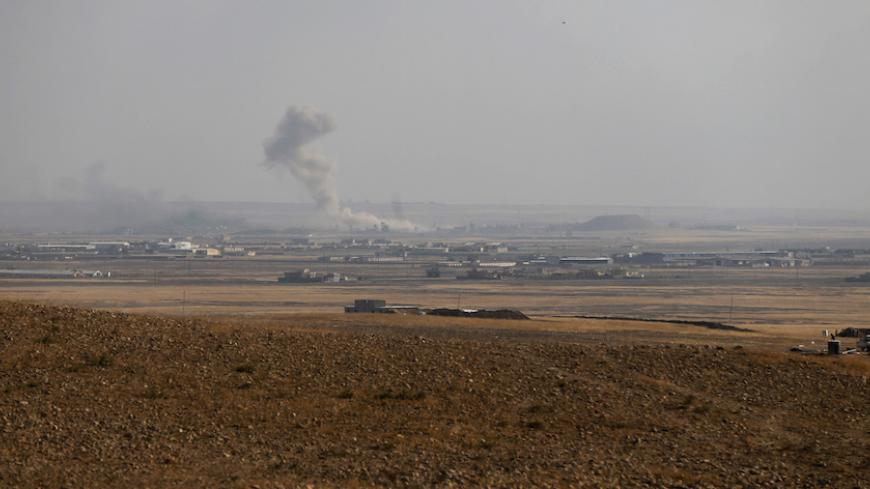 Smoke rises from clashes at Bartila in the east of Mosul during clashes with Islamic State militants, Iraq, Oct. 18, 2016. - REUTERS/Thaier Al-Sudani

The bombastic tone Turkish President Recep Tayyip Erdogan employs with regard to developments in the Middle East has pushed Turkey into the background both militarily and politically in Iraq and Syria.

We're seeing this sidelining again in the operation to liberate Mosul from the Islamic State. Erdogan is fuming even harder now that it is clear that Turkey is not part of the Mosul operation despite having declared its desire to join it.

“They say we should not enter Mosul. How can we not? I have a 350-kilometer [215-mile] border [with Iraq]. Those who have nothing to do with the region are there because Baghdad supposedly invited them. Did Saddam [Hussein] invite them 14 years ago? But they still came,” Erdogan said angrily while addressing the International Istanbul Law Congress on Oct. 17.

Iraqi Prime Minister Haider al-Abadi repeated only hours before the official launch of the Mosul operation, “Turkish forces will not be allowed to participate in the liberation of Mosul under any circumstances.” Washington has backed Abadi, saying any foreign troops in Iraq should be there with Baghdad’s permission.

“We won’t be responsible for the consequences emerging from an operation that excludes Turkey. Turkey will participate both in the operation and the talks later. It is not possible for us to stay out of this,” Erdogan added.

He also stressed that Turkey would not evacuate the Bashiqa camp near Mosul. Turkish troops deployed in the camp are training Kurdish peshmerga forces and other anti-IS fighters. Iraq has complained to the United Nations that this deployment is an occupation.

Erdogan did not spell out, however, how he plans to ensure that Turkey will be part of the Mosul operation. Addressing the public in the central Anatolian city of Konya last week, he said, “If the coalition does not want Turkey in the operation against Mosul, Turkey will activate its plan B and plan C.” He did not elaborate further.

With regard to Bashiqa, Murat Yetkin, the well-connected editor-in-chief of Hurriyet Daily News, suggested it is not difficult for Erdogan to sound defiant on this topic. “He knows, as the commander in chief of the Turkish military, that the understanding already reached with the Americans is for the Turkish soldiers to stay in Bashiqa and to not move a meter out of it,” Yetkin said.

The United States has been exhorting Ankara and Baghdad to work out their differences through direct talks. A Western diplomat who spoke to Al-Monitor on condition of anonymity due to his sensitive position said that if Ankara joined the coalition under rules set by Baghdad, the move would be welcomed.

“Mosul is not going to be an easy operation and could last well into spring. There is room for every military contribution against IS,” said the diplomat. He explained that a political contribution by Turkey could also be valuable, given its influence over Iraqi Sunnis, in trying to stabilize Mosul after IS is defeated.

“If Turkey gives any indication, however, that its intention in joining the coalition is to promote a different agenda, this would be counterproductive,” the diplomat added.

Turkey has also been cautioning Baghdad and its allies against tampering with the demography of Mosul, which is predominantly Sunni. This stance may have been taken as reflecting Ankara’s pro-Sunni foreign policy under Erdogan and the ruling Justice and Development Party, but there is truth in the warning.

Yetkin pointed out that the Mosul operation will be key to the future of Iraq, Syria and the entire Middle East. “The last three decades show that if Western-supported governments in the region fail to fight corruption and religious sectarianism, new and more radical terrorist movements emerge. That should be a lesson for both the United States and Iraq after taking Mosul from IS,” he argued.

This concern notwithstanding, the start of the Mosul operation without Turkey has put matters in better focus for Ankara, not just with regard to Iraq and Syria, but also the Middle East generally.

With the United States propping up the Abadi government in Iraq and Russia doing the same for the regime of President Bashar al-Assad in Syria, Turkey will have to look ahead and recalibrate its policies accordingly, rather than pursuing plans that have proven to be unrealistic and left it in the cold.

At the start of the Arab Spring, Ankara had been sure that developments were going to make it the principal regional player. Today, however, Erdogan’s main rivals or enemies in the region, from Assad in Syria to President Abdel Fattah al-Sisi in Egypt, remain in power and continue to consolidate their positions with US and Russian help.

Pro-government commentators are pushing the line that ties with Russia will counterbalance US policies in the region that are contrary to Turkey’s interests. Erdogan supporters are also angry with Washington for not immediately extraditing cleric Fethullah Gulen, the alleged mastermind of the failed coup attempt.

Ersin Ramoglu, a commentator from the pro-government newspaper Sabah, wrote that Turks are angry with the West and have a special hatred for the United States, “which put a stick in the spokes of Turkey’s wheel as it was growing and developing.” He argued that Turkey will have its revenge on the United States by developing ties with Russia. Maintaining that the United States was trying to control the world by grabbing the energy resources of the Middle East, Ramoglu wrote, “Our leader spoiled this plan by reconciling with [President Vladimir] Putin.”

Those who support this view disregard the fact that Moscow put a spoke in the wheels of Ankara’s plans for Syria by supporting Assad, Erdogan’s regional archenemy, and that it is also at odds with Ankara on issues of importance to Turkey ranging from Cyprus to the Crimean Peninsula and the question of the Armenian genocide.

The bottom line, however, is that many unknowns remain in Iraq and Syria, where developments will determine if, when and how a role comes up for Turkey despite the verbal sparring witnessed recently between Ankara and Baghdad.

Nihat Ali Ozcan, a political and military analyst from the Ankara-based Economic Policy Research Foundation, said it is not possible to say what shape things will take in Iraq and Syria, where the actors are many and not limited to the United States and Russia, or Abadi and Assad.

“It is therefore not possible to say if Turkey’s current approach is sustainable or not, because much will depend on developments in the field,” Ozcan told Al-Monitor. “If, however, Abadi and Assad, or at least their regimes, end up consolidating their positions, then it is clear that Turkey will have to opt for policy revisions,” he added.