After following the story of one Syrian woman and her five children in Madaya, ABC News teamed up with Marvel Comics to share her story in a free digital comic. 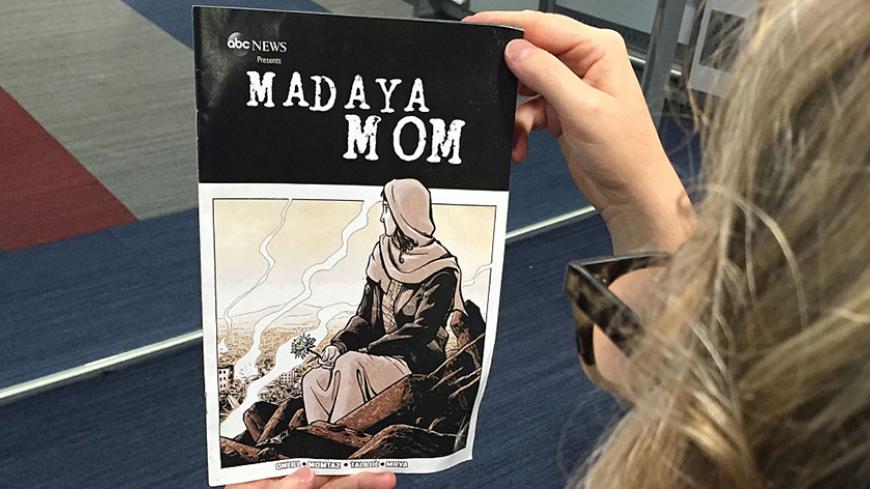 A woman looks at the cover of the comic book "Madaya Mom" in Washington, DC, Oct. 7, 2016. - THOMAS URBAIN/AFP/Getty Images

Marvel Comics usually publishes comic books about superheroes who save the world from villains, but this time, they've decided to do something different. "Madaya Mom," a Syrian mother of five living in the besieged Syrian city of Madaya, has become Marvel's latest superhero.

“A hero, or a superhero, is a matter of heart and determination, and not about special powers. So if in the midst of war, you keep the strength to be a calm and loving mother to your family, and take the role of spokesman for all the mothers caught in a war, I think you fit the category of a superhero,’’ Dalibor Talajic, the comic's illustrator from Zagreb, Croatia, told Al-Monitor. ABC News managed to establish contact with a Syrian woman and chronicled her testimonies in a blog on its website. For her own protection, she was called “Madaya Mom.”

"Madaya Mom" is a free new digital comic created by ABC News and Marvel Comics. The comic tells the true story of the Syrian mother and her five children who have been trapped inside the Syrian town of Madaya since Syria's President Bashar al-Assad began besieging the town in July 2015. The woman and her children are fighting off starvation, unsanitary living conditions and threats of violence.

The woman couldn’t get out of Madaya, and ABC News couldn’t get in. Because the network wanted to add a visual element to her story, ABC producer Rym Momtaz approached Marvel to ask if they could visualize the woman's messages, Talajic said. “Since I have been working with Marvel for years and I had a reputation as an artist who can build around very little information, they asked if I was up for it.”

Talajic, who in 2009 began working for Marvel almost exclusively, said he was extra aware of the sensitivity of the material and didn’t want to “slip into cheap sensationalism.” In the early '90s, the illustrator produced a few short war stories while Croatia was at war.

“But there was a naive, romantic view of the war in my stories. Nothing like this. So for me, 'Madaya Mom' is very controversial, but only from a humane point of view. This is not a true story from, let’s say, a decade ago. This is happening right now. As we speak, this woman is out there living her nightmare,” Talajic explained.

In the comic, the heroine says, “All that is left are cats and dogs” and that the water is so freezing cold due to the lack of electricity that when she touches it she goes “numb immediately.” She describes how she and her children suffer from intense hunger and cold, and says that going outside is extremely dangerous because of regime snipers and daily bombardment.

The moment that hit him the hardest while working on the comic was when the mother decided to stop eating in order for her children to have more food. “Mostly because it was not a dramatic decision. It was natural and calm, as if she changed her shirt for that day. It's something you do, simple as that,” Talajic said.

The siege of Madaya is now in its second year. Dozens of people have died from starvation and malnutrition. Children are collecting grass and leaves with which to make soup and can't even walk straight, reports show. Approximately 1 million Syrians live in siege conditions while another 4.5 million are waiting for humanitarian aid. UN Secretary-General Ban Ki-Moon said in January that the use of starvation as a weapon in Syria is "a war crime."

Since 2011, many Syrian artists have responded to the ongoing civil war. They used their pens and pencils to tell the stories of outcries over people's deaths as well as poke fun at the tyranny of Assad’s regime. The Kurdish-Syrian cartoon artist Kaniwar Zidan has made many cartoons about the Syrian civil war, including one that explains the suffering of children living in Madaya.

“When I first saw the Marvel comic about an ordinary Syrian mom, I thought it was great. It perfectly describes what mothers in besieged areas are going through and what we, as artists, want the world to know,” Zidan, who fled to Germany before the war started, told Al-Monitor.

Drawing cartoons may lead to threats and intimidation. Zidan himself has received lots of insults and threats online, especially in the beginning of the war. “People threatened to kill and kidnap members of my family. Yes, I was scared. Luckily, I received a lot of moral support as well. This encourages me to continue my work, despite the risks.”

Reactions to "Madaya Mom" are extremely positive in general. There are a few voices that comment on it from a political point of view, Talajic said. “Regardless of your feelings or knowledge of the Syrian war, this is a story about civilians, about people caught in between the guns. That's all. I am not sure what this comic can achieve. Raising awareness of other people suffering is always a good thing. If the public is aware enough, the pressure on the politicians and decision-makers starts. I dare to hope this is a small contribution to that.”

Talajic, who had no connection to Syria whatsoever before he made the comic, explains that the ABC journalist managed to send a few images from the comic to the woman in Madaya.

“The mother said she loved it. That truly means a lot to me,’’ he concluded.