Naif al-Mutawa, creator of comic book series "THE 99," spoke with Al-Monitor about the recent death threat by the Islamic State and how US President Barack Obama's enemies became his. 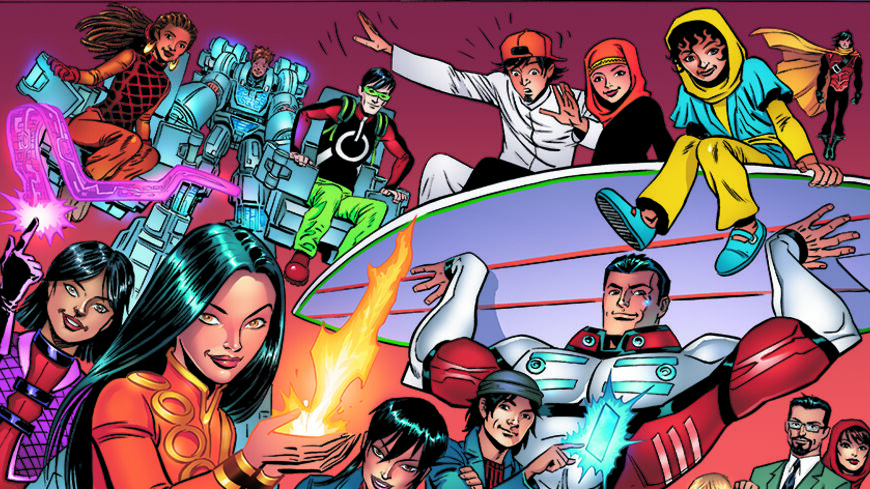 An image from The 99 comic series. - Teshkeel Comics

Zealots the world over seem to have it out for "THE 99" creator Naif al-Mutawa.

Seven years after the Kuwaiti psychologist and entrepreneur first launched his comic book series based on the 99 attributes of Allah, he's facing a sudden onslaught of death threats, fatwas and lawsuits. His US distributor, meanwhile, continues to sit on a TV deal, in part because of pressure from conservative bloggers who object to any positive description of Islam.

He says his cartooning days are behind him and he's focused on treating patients at his private clinic and teaching at Kuwait University's faculty of medicine. Yet, he's drawn back again and again into the fray over Islam and what it represents, a bespectacled superhero of sorts against intolerance.

"I finally went in to answer the charges of being a heretic," Mutawa said nonchalantly about his visit to a Kuwaiti police station earlier this month. "Leading up to it, there's been a whole series of death threats."

Mutawa chatted with Al-Monitor on the margins of the World Innovation Summit on Education (WISE) last week in Doha, where he was on the opening panel. He's facing a lawsuit by a self-proclaimed defender of the Sunni faith as well as a recent fatwa from the Grand Mufti of Saudi Arabia, both of whom have attacked "THE 99" for allegedly disparaging Islam — even though both the Saudi and Kuwaiti governments gave their blessing for the project years ago.

"I went there with my lawyer and when I was asked the question at the police station, I just burst out laughing," Mutawa told Al-Monitor. "It's just so ludicrous what's happening. I'm the one who's giving Islam a bad name? I've been giving Islam a good name for over 10 years."

"It's very schizophrenic," he added. "They keep honoring me from here, and then they sue me from here — it's like they don't know what to do with me."

More serious are reports that the Islamic State (IS) has called for his head on Twitter. But Mutawa doesn't seem overly concerned about that either, despite the group's grim record.

"It could be a 13-year-old girl in her closet," Mutawa shrugs. "The cybercrimes unit in Kuwait … has said that these threats on Twitter have come from outside Kuwait. And Twitter has killed the hashtags, which took a couple of months of me going directly to talk to them and saying: 'Hey, there's a hashtag #whowillkillNaif. Not cool'."

He said he refused extra security after the latest death threats.

"My lawyer wanted me to do something, I said no. Because basically I'm a psychologist, I have a clinic — it's either I die slowly or I die quickly," he told Al-Monitor. "I mean, you're going to put security outside my clinic? Who the hell is going to go see a psychologist with security when they already have issues with depression and anxiety? So I'm just not going to change my life."

It's not just at home that his work has sometimes gotten a cool reception. Despite the worldwide accolades that greeted "THE 99" when it first came out, The Hub — a network owned by the Discovery Channel and toy-maker Hasbro — never delivered on its plans to air the show, although two seasons did make it onto Netflix.

Mutawa blames pressure from a handful of conservative bloggers, whose campaign against the project took off after US President Barack Obama praised him as "perhaps the most innovative" entrepreneur in the audience at his 2010 Presidential Summit on Entrepreneurship.

"His comic books have captured the imagination of so many young people," Obama said at the time.

Attacks began when he first announced a crossover between "THE 99" and DC Comics characters, Mutawa said. But they really took off after Obama's remarks.

"All this happened after the Obama thing, because there [in the United States] I became a [jihadist], intent on radicalizing young kids to make them suicide bombers. And here [in the Gulf] I became an apostate Zionist," Mutawa said. "My mother told me growing up, be careful who your friends are because you end up inheriting their enemies. And that's what happened: I don't know President Obama. I'm very honored he called me out. But the hate became magnified after that."

Mutawa said The Hub still has the rights to the show for another year. After that, he said, he is open to trying to get it on the air again if someone is interested — but that's not a priority.

"I feel like things need to settle," he said. "If somebody came and said, 'Hey, let's fund Season 3, I'd say OK. But right now because of all the controversial crowd around it, and the death threats, somebody who'd want to do it is only somebody who wants to fight [IS]. It's no longer a business thing — it's become a political thing. There were always political undertones but it was never in-your-face politics for me; and then it became that."

Mutawa sees a silver lining in the rancor in both the United States and the Arab World.

"I'm one of those who thinks that can be a way to force creativity. "THE 99" was what in the end? It was a creative way to try to solve an underlying issue, and there wouldn't have been that attempt if the issue didn't exist," he said.

"This inspired DC Comics to launch their first Muslim superhero, it inspired Marvel to launch their first Muslim superhero, and we're going forward. So I might have been a casualty along the way, but it didn't stop purposelessly — it created momentum, and there are finally good guys who are Muslim in popular culture. We put a Saudi superhero on American television through Netflix with "THE 99" and that's how things change."