Iraq has executed three Saudi prisoners and nine others are on death row, raising the objections of Saudi Arabia that wants Baghdad to transfer the prisoners to the kingdom. 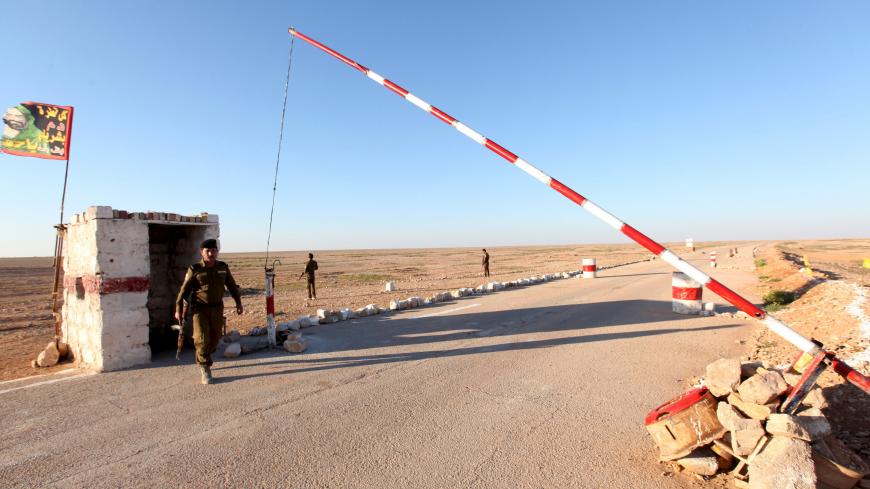 A member from the Iraqi security forces stands guard at a checkpoint during a patrol at the border between Iraq and Saudi Arabia in Samawah province, Feb. 17, 2016. Tensions have risen between the two countries over the issue of Saudi prisoners in Iraq. - REUTERS/Alaa Al-Marjani

Nine other Saudis on death row are scheduled to be executed in November. They are Fahad al-Anzi, Mohammed al-Obeid, Majid al-Buqami, Faisal al-Faraj, Battal al-Harbi, Ali al-Shahri, Ali al-Qahtani, Hamad Yahya and Abdulrahman al-Qahtani, all in al-Hoot prison in Nasiriyah.

Saudi media outlets reported anonymous sources as saying that Shamri had been extremely tortured during his 13-year detention, perhaps so much so that one of his legs had to be amputated.

The issue of Saudi prisoners in Iraq is one of the most sensitive outstanding issues between the two neighboring countries, and one of the reasons behind their deteriorating relationship. Saudi Arabia keeps calling for the need for new trials for its nationals detained in Iraq and objects to the executions of Saudi citizens. Iraq says the Saudi prisoners formed part of terrorist organizations operating in Iraq since 2003.

On Oct. 3, Ali al-Qarni, a spokesman for Saudi prisoners in Iraq, said in a press statement, “Almost 25 Saudi prisoners in Iraq have either completed their sentences or [should be released] under conditional parole according to a court decision, but none have been transferred to the Saudi Embassy in Iraq to be sent back home.”

It is said that the guillotine used in the execution of former Iraqi President Saddam Hussein is the same one being used to execute Saudi prisoners; if true, it is not whether this is a coincidence or a carefully calculated move by the Iraqi authorities.

Saudi Arabia is seeking to persuade Iraq of the need for new trials for Saudi prisoners in Iraq or at least convince the Iraqi authorities to transfer the prisoners to Saudi Arabia to serve the rest of their sentences. However, Iraq is refusing to answer the Saudi demands.

Saudi Arabia has accused the Iraqi government of not releasing six Saudi prisoners who completed their sentences in Iraqi prisons in Nasiriyah, Rusafa and Muthanna airport in Baghdad.

On Aug. 14, Saudi prisoner Ali Mohammed al-Habbabi died at the age of 22 in the fourth Rusafa prison in Baghdad. His father said that his deceased son had a mental illness, but that Iraqi authorities did not provide treatment.

Salman Ansari, the chairman of the Saudi-US relations committee, told Al-Monitor, “There are 60 to 85 Saudi prisoners in Iraq, and Saudi Arabia has the right to look after its nationals around the world and Iraq is no exception. There is an opportunity for the Iraqi government to mend its relationship with its Arab brethren, particularly Saudi Arabia, and coordinate with it in order to transfer Saudi prisoners and allow them to serve the rest of their sentences in their country.”

He added, “I am personally angered by reports proving that there have been unfair trials and sectarian discrimination against Saudi prisoners in Iraq. Whatever the charges for their detention, they have a right to a fair trial in which their human dignity is respected.”

Saudi Arabia seems to be making a significant diplomatic effort for Saudi prisoners to serve the rest of their sentences in their country, but this would likely cause a public and political commotion in Iraq. It seems very unlikely that the Iraqi government would take such a step displeasing its citizens.

The issue of Saudi prisoners in Iraq has long been quite critical for Iraqi politicians; when former Saudi Ambassador Thamer Sabhan visited al-Hoot prison in Dhi Qar province in southern Iraq in June, a number of Iraqi politicians expressed their opposition to Sabhan's visiting prisoners the politicians considered to be terrorists.

Several Iraqi political blocs called for an Iraqi version of the Justice Against Sponsors of Terrorism Act (JASTA) that recently was passed in the United States. Iraqi parliament members are saying Saudi Arabia should be sued for its role in supporting terrorism, accusing it of facilitating the way for Saudi and non-Saudi extremists to cross into Iraq to carry out terrorist acts.

On July 12, Aws al-Khafaji, the head of the Abu al-Fadl al-Abbas faction, threatened to execute Saudi and non-Saudi prisoners detained in Iraq on terrorism charges if the Iraqi government was unable to execute them itself.

The issue of Saudi prisoners in Iraq remains a critical matter in Saudi-Iraqi relations, which do not seem to be heading in a positive direction in the short term in light of Saudi Arabia’s demands that Saudi prisoners be transferred to Saudi prisons while Iraq insists on carrying out the death sentences.

This disagreement over Saudi prisoners, despite the serious charges against them, adds fuel to the fire and widens the gap between Iraq and Saudi Arabia, aggravating other conflicts over regional issues as well as each country’s internal problems.