President Mahmoud Abbas ratified the social security law, after a campaign led to amendments that guarantees the rights of employees, women and people with disabilities. 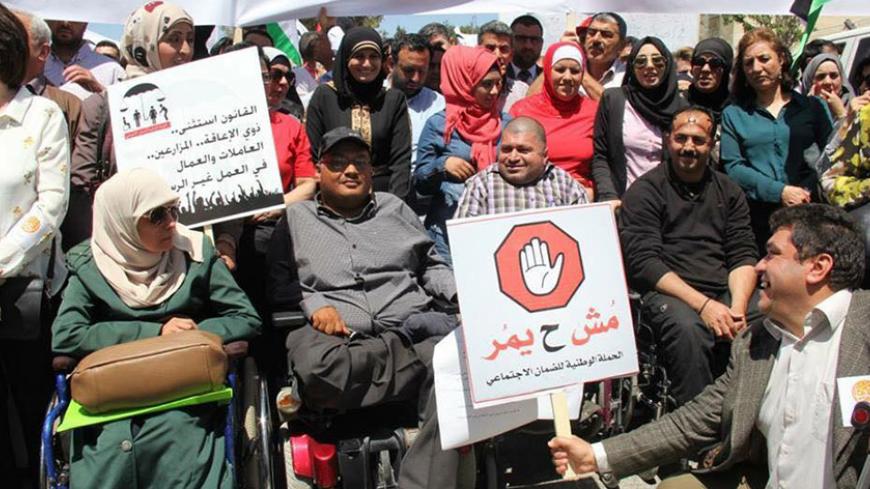 RAMALLAH, West Bank — On Sept. 29, Palestinian President Mahmoud Abbas approved the social security law, which the Palestinian government had referred to him on Sept. 27. Abbas approved the new amendments that were made following discussions between the ministerial committee, which was set up by the government on April 21 to specifically follow up on this law, the National Campaign for Social Security, trade unions, the private sector, economists and legal experts, under the auspices of the Palestinian Legislative Council’s (PLC) parliamentary blocs.

Some provisions of the social security law, which the government had approved Feb. 16, were amended after popular protests were organized by the National Campaign for Social Security, which includes trade unions and civil institutions. The latest protests were held in front of the Cabinet in Ramallah on April 19 and May 10.

The new law was widely welcomed by the many parties Al-Monitor spoke with, including the National Campaign for Social Security — one of the largest civil society campaigns launched on April 5 — the parliamentary blocs that participated in drafting and amending the law, and the Palestinian government.

Secretary of the National Campaign for Social Security Iyad Riyahi told Al-Monitor that the amendments would not have been made had it not been for the campaign they launched.

Regarding other amendments, Riyahi said, “The pension’s coefficient was increased from 1.7% to 2%, which will contribute to raising the value of pensions for employees. The minimum pension was increased from 50% to 75% of the minimum wage, which amounts to 1,450 shekels [roughly $380].”

The law provided that the government shall be the guarantor of the social security fund’s money. In this regard, Riyahi said, “The new law stipulates that the government is bound to cover the fiscal deficit in the fund, should it occur. This clause was not included in the old law.”

After the terms were agreed upon and the law was approved by Abbas, the next step is to form a board of directors for the social security authority, which is headed by Minister of Labor Mamoun Abu Shahla. The board of directors will include five representatives of the government, five workers and trade union representatives, five employer representatives and two experts in financial and administrative affairs. Abu Shahla told Al-Monitor that the Palestinian Cabinet session, due to be held in the next few weeks, will work on this accordingly.

According to Abu Shahla, the employees and workers will benefit most from this law, as the retirement pension has been increased and more privileges have been allocated.

Abu Shahla added that restoring the rights of Palestinian workers who have worked in Israel is one of the main issues that the social security authority would be working on, in virtue of Article 38 of the Paris Protocol signed between Israel and the Palestinian Authority on April 29, 1994. According to this article, the fees that were deducted from the wages of Palestinian workers in Israel, which amount to 31 billion shekels ($8.2 billion), shall be transferred to the social security authority once it is established.

Abu Shahla explained that the social security law will be submitted at the next ILO meeting in Geneva at the end of October. A campaign will also be launched during the meeting to raise the necessary funds from donor countries to set up the headquarters of the authority, which would cost about $8-$10 million.

Bassam Salhi, the chairman of the parliamentary committee for drafting and amending the social security law, told Al-Monitor that the law was amended following talks between the parliamentary blocs and the ministerial committee, in coordination with other competent parties.

Salhi said that a mechanism will be set up to follow up on the implementation of the law by the social security authority’s board of directors, the government and the PLC, noting that the law, in its current form, is an achievement for the Palestinians.

The new law was approved by employers from the private sector, who held talks about amending some clauses of the draft law with the ministerial and parliamentary committees, and workers and employees represented by the National Campaign for Social Security. Following these talks, the law was submitted to Abbas for ratification. Khalil Rizk, the representative of employers in the private sector, told Al-Monitor, “The amended version of the social security law was approved by all [concerned] parties, as it is of benefit to all the Palestinian people.”