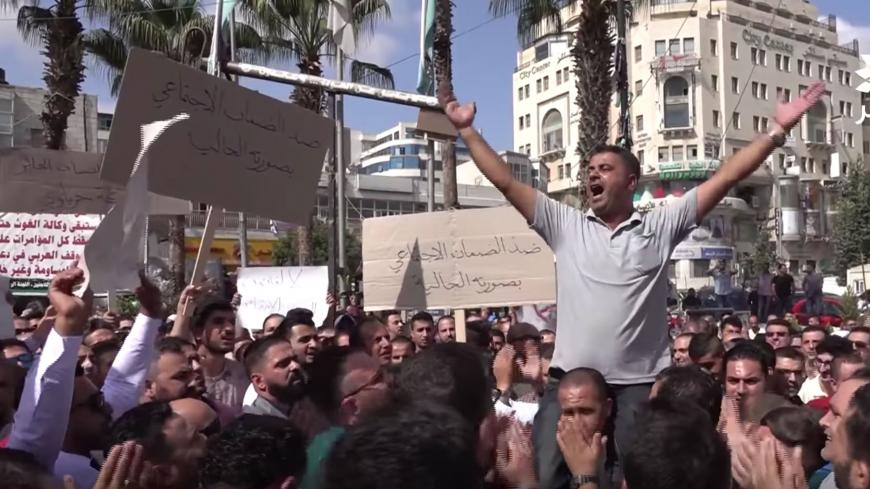 People gather to protest the social security law in Ramallah, West Bank, in a still from a video uploaded Oct. 15, 2018. - YouTube/تلفزيون الفجر

A mandatory Palestinian social security law due to take effect Nov. 1 faces an uphill struggle, with various groups calling for it to be postponed or at least made optional for a time.

At a mass demonstration Oct. 15 in Ramallah, protesters said they do not believe the Palestinian government is stable enough to guarantee such a huge economic and administrative project, which will be entrusted with a portion of workers’ money. The demonstrators called for the resignation of Labor Minister Mamoun Abu Shahla, who is also in charge of the Social Security Association.

Palestinian Prime Minister Rami Hamdallah said Oct. 15 in a public ceremony that the law must take effect as planned, but there is room for negotiations and amendments.

Different Palestinian groups, including the Palestinian Non-Governmental Organizations Network and the Palestinian General Federation of Trade Unions, opposed the law in its original form when it was first signed by President Mahmoud Abbas in March 2016. Since then, several changes have been made in an effort to appease the opposition.

Bassam Salhi, a member of the Palestinian Legislative Council, told Al-Monitor, “The social security law has gone through three stages. The first stage was reached with the initial 2016 law, which we and others opposed. This led to the second stage, in which we held serious dialogue for over six months, which led to some important changes to the original text.”

Salhi said that positive changes were approved, and the law was amended to improve the rights of workers and the disabled. In October 2016, Abbas signed the amended version of the law, which provided a two-year period before the law was to be implemented, to allow companies and workers enough time to prepare.

Salhi said he is proud of the changes, which included reducing to 7% (from 7.5%) the amount of money workers have to contribute, and increasing the monthly contribution of employers to 9% (from 8.5%). "Owners and the private sector agreed to the changes," he said.

The third and final stage, according to Salhi, is the current one, in which various groups are demonstrating and again stating their opposition — often with ulterior motives. Some proponents of the law argue that the protests were largely initiated by employers, who will lose the most if the law is implemented; they will have to pay all end-of-service compensations (severance pay) in addition to the 9% monthly contributions for every employee. Wisam Rafidi, a social science professor at Bethlehem University, said in a column published Oct. 16 on the Watan TV website that there is plenty of evidence that various factory owners and other businesses were a major force behind the demonstrations.

Salhi concedes that there are legitimate reasons for opposition and that not everyone is able to get what they want, but he said this version of the law is the best that could be negotiated.

Inam Zaqout, a Palestinian economist who runs the Asala organization for microfinancing, told Al-Monitor that the vague nature of the law will cause major problems. “There is little being done to educate the public about the new law and how it will benefit the worker. … People don’t feel they're aware of what they're getting into,” Zaqout said. Some of the issues that concern them are how the funds will be managed and what guarantees will be implemented to ensure transparency of how the money is used.

Raed Elayan, an outspoken opponent of the social security law, wrote on his Facebook page that he isn't convinced it's a good idea to implement the law and then make amendments, as the prime minister has suggested.

“The solution is simple: Make the law voluntary and let people see its values and agree to join it if they are convinced of its benefits,” Elayan said.

Suheir Ismael, director of TAM, a Bethlehem-based nongovernmental organization, told Al-Monitor that while she favors the law for its benefits to workers, she feels the workers' required contribution is very high. “I am with the social security law and I don’t think it should be stopped. But charging workers 7% is a lot," she said. "It would make sense if that contribution was around 4% or 5%.”

But Ismael, whose NGO trains women in media skills, insists that it makes no sense to make the law optional. “It must be mandatory because employers’ contributions are a big part of the law, and if it's optional, most employers won't join in," she said.

While most of the discussion focuses on the lack of confidence in the Palestinian government, a major incentive to pass and implement the law is the billions of dollars that are in play. The 1994 Paris economic agreement includes a clause that allows for the end-of-service compensation of some Palestinian workers in Israel to be transferred to a Palestinian fund.

Mohammad Rajoub, anchor of a morning program on Ajyal Radio Network, told Al-Monitor the issue involves millions of dollars that the newly established Palestinian Social Security Fund will be able to invest. It's not clear how much has been put aside in Israel. Rumors say the amount is at least 10 billion shekels ($2.7 billion as of Oct. 19) and some say it is as high as 50 billion shekels. While retired employees have received their compensation, this amount represents the money set aside to compensate those still working.

This large sum of money that will soon become available to the Palestinian Social Security Fund is also causing competition between banks. The new law stipulates that the funds should be deposited in local banks and not in banks headquartered outside of Palestine.

Banking sources told Al-Monitor that this clause has caused major problems with the Arab Bank, which was established in Jerusalem in 1930, but has become a major regional bank based in Amman, Jordan, and is thus disqualified as a host for the money coming from Israel and earmarked for the Social Security Fund.

Palestinian media sources in Ramallah told Al-Monitor that Abbas and the chairman of the Arab Bank, Sabih al-Masri, have discussed the issue of banks’ roles and their ability to benefit from the new Social Security Fund.

The implementation of a worker-friendly social security law will have long-term economic effects on the Palestinian population and especially on the working class. While many people have legitimate reasons to worry about the stability and longevity of the Palestinian government, such a law will go a long way toward helping to stabilize and empower the government and promote its economic independence.