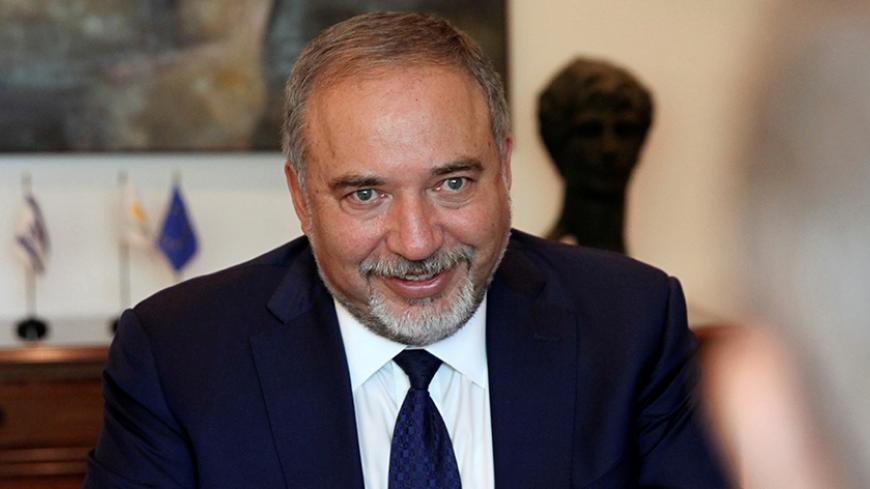 Israeli Defense Minister Avigdor Liberman is seen during a meeting with the Cypriot foreign minister at the Ministry of Foreign Affairs in Nicosia, Cyprus, Sept. 16, 2016. - REUTERS/Yiannis Kourtoglou

The surprising interview that Israel’s Defense Minister Avigdor Liberman granted to the Palestinian newspaper Al-Quds and that was published Oct. 24 is helpful in clarifying which Liberman is actually sitting in the defense minister’s seat.

Pundits have written countless articles about this very issue, while foreign governments and their intelligence agencies have been keeping close tabs on Liberman’s first few months (since the end of May) in the nerve center of Israel’s military power in Tel Aviv, curious to see what direction he takes. Which of his many faces will he wear, once he assumes the position of “Mr. Security”? Will it be that of the local brute, who declares that Hamas senior official Ismail Haniyeh will have just 48 hours to live if the bodies of IDF casualties (from the 2014 Gaza War) are not returned immediately? Or will it be the “responsible adult,” who preaches the need for a regional peace initiative, supports a two-state solution, and reins in the adventurism of Prime Minister Benjamin Netanyahu and the right?

For now it seems that the second Liberman is in control. For all intents and appearances, the defense minister is showing himself to be level-headed, moderate and rather pragmatic. His decision to grant his first official interview in his new position to a Palestinian newspaper considered to be the mouthpiece of the enemy is intriguing. The fact that senior Palestinian journalists identified with Palestinian President Mahmoud Abbas and Ramallah (his headquarters) were allowed access to the Holy of Holies — Israel’s Defense Ministry — and given a chance to sit down with Liberman grabbed headlines not only in Israel, but throughout the Palestinian Authority and many other places across the Middle East.

While the staff of Al-Quds came under a barrage of sharp criticism from all directions for publishing the interview, Liberman himself seems quite pleased with it. “The interview was very successful,” a source from Liberman’s entourage told Al-Monitor on condition of anonymity. “The paper did a professional job, and the minister’s comments were translated fairly. Almost nothing was left out, and all of his messages were conveyed.”

The person behind the idea for the interview was the most powerful person in Israel dealing with the Palestinian issue, the coordinator of government activities in the territories, Maj. Gen. Yoav (Poli) Mordechai, who has been developing a strategic relationship with Liberman. Mordechai is known for his pragmatic approach to the Palestinian issue. He regards Israeli investments in the economic welfare of Palestinians and the creation of new circumstances and an atmosphere of hope as key to maintaining calm throughout the entire region. When Mordechai suggested that Liberman circumvent the local leadership and speak directly to the Palestinian people, Liberman had no qualms, as usual, and jumped at the idea. He loved the proposal as soon as he heard it and wasted no time moving ahead with full force. Once the decision was made, Mordechai coordinated the interview and remained present throughout it.

Liberman’s comments in that interview are a direct extension of the carrot-and-stick policy that he presented shortly after entering his new position. In it, he laid out a new Israeli policy, which would invest in and improve living conditions for the Palestinian population that is not involved in terrorism, while at the same time intensifying the war against those responsible for acts of violence against Israel.

On one hand, Liberman used the interview to declare, “If they force a new war on us — it will be Hamas' last because we will completely destroy them.” On the other hand, he also told his Palestinian readership that if Hamas abandons terrorism, Israel will agree to various far-reaching economic and international initiatives, including the construction of a supervised (by Israel) seaport. Liberman even claimed, “Gaza could one day be the new Hong Kong or Singapore of the Middle East.” That will only happen, however, if its people understand that the path of terrorism will lead them nowhere. He went on to offer the following package deal as his bottom line: If Israel’s security situation improves, the economic circumstances of the Palestinian people will improve considerably, too. He was telling his primary audience that if you give us quiet, you will get hope in return.

There is no real chance that a genuine dialogue between Hamas and Liberman will develop over this. In response to the interview, Hamas has already declared that the issue of arms for the Palestinian resistance is not up for negotiation. At the same time, however, Liberman’s comments reflect his new demeanor. He is not being belligerent and is showing that he is aware of the limits of force. He is a calming rather than an inflammatory factor.

His policy positions regarding Hamas, economic possibilities for development in Gaza and ways to drain the Gaza “pressure cooker” in order to prevent another round of violence have undergone a deep-seated change, as could be seen in the ideas he offered in that interview. In contrast, his policy toward Abbas remains the same. Liberman reiterated that Abbas is not a partner for peace, that he has no intention of reaching a real peace accord with Israel and that only after he is replaced will an opportunity to reach an arrangement emerge.

Liberman reinvigorated his support for a two-state solution, something that should not be taken for granted given the current mood among the Israeli public. His close but distant relationship with former Fatah senior official Mohammed Dahlan continues behind the scenes, which is important since Dahlan remains a claimant to the Palestinian leadership after Abbas. Meanwhile, Liberman is trying to establish lines of direct communication between Israel and the Palestinian public. His interview with Al-Quds was his opening salvo in that effort.

The paradox is that Liberman’s relentless attacks on Abbas actually continue to prop up the elderly Palestinian leader, regardless of how wobbly his position really is. Liberman is not very popular in the Palestinian territories, and that is putting it mildly. He certainly knows that his verbal assaults on Abbas actually strengthen the Palestinian leader’s position, but these attacks are really intended for the Israeli public’s consumption. Liberman has his own “base” of right-wing voters that he must continue to maintain.

At this point, it remains unclear whether Liberman’s interview with Al-Quds was also coordinated with the Prime Minister’s Office in Jerusalem. Netanyahu has had some sleepless nights and restless days over the past few days, given his deep concern that President Barack Obama will launch a dramatic diplomatic initiative in the time between the presidential election and his leaving the White House. The prime minister has been focusing all of his attention on the possibility and sharing his very serious concerns with many of his colleagues. A relatively moderate Liberman can help relay that kind of impression, which Netanyahu is trying to convey to Washington, about Israel’s intentions.

But Liberman can’t do anything without inserting his own brand of mischief into it. The defense minister timed his interview with the Palestinian newspaper perfectly, so that it came out right before Israel’s Security Cabinet met for a discussion, which was supposed to be devoted to the situation in Gaza. Liberman’s plan was to arrive at the Cabinet meeting while the headlines from his interview about Gaza were still splashed across the front pages of all the papers and on all the websites. Maybe that was why Prime Minister Netanyahu made a decision sometime during the night between Tuesday and Wednesday to change the topic of that meeting. With all due respect to Liberman, Netanyahu never earned a reputation for complementing any political colleague or playing second fiddle to any colleague by allowing that person to dictate the course of the discussion.