Will Iran allow the EU to open shop in Tehran?

Iranian politicians are divided on the new EU Parliament resolution that favors normalization of ties with Iran. 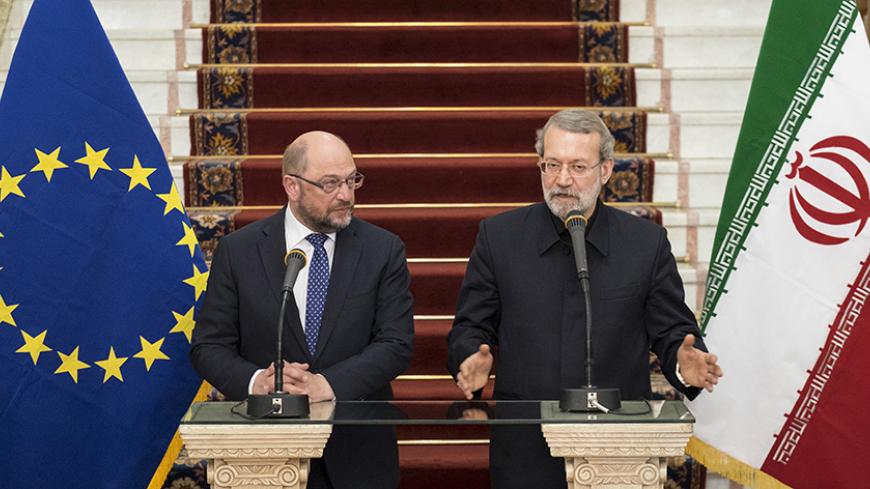 The European Union Parliament passed a resolution Oct. 25 calling for normalization of relations with Iran — a decision that Tehran cautiously welcomed.

In response to the resolution, Iranian Foreign Ministry spokesman Bahram Qassemi said that the EU Parliament seeks "renormalization and expansion of long-term relations with the Islamic Republic of Iran." He added, "This shows the positive will of the European entity for extending and deepening all-out bilateral relations with Iran."

However, the day after the resolution passed, the chief of the Iranian judiciary’s Human Rights Council, Mohammad Javad Larijani, said, “There are a lot of flaws in the resolution. … The document regards Iran as a market for the sale of European goods.”

Noting the EU's plans to establish an office in Tehran, Larijani added, “It would be no problem if this office pursues trading issues, but they have stated that after establishing the office, they want to establish close contacts with human rights advocates so they can ensure the process of human rights implementation. Thus, they should know that the judicial system will definitely not allow such a nest of corruption to be established in Iran.”

During a joint press conference Oct. 26 with his visiting Finnish counterpart, Sauli Niinisto, President Hassan Rouhani expressed Iran’s willingness to enter into further dialogue with the EU. Reformist Etemaad newspaper, in its Oct. 27 edition, described Rouhani’s remarks as "a green light for the EU.”

Furthermore, in an Oct. 27 interview with Vaghaye Etefaghie newspaper, spokesman Qassemi reacted to Larijani’s remarks on the judiciary opposing an EU office in Tehran, saying, “The permission [for such a move] is given by the administration. … Most EU countries have embassies in Tehran, and in fact, the mentioned office is similar to an embassy.”

Hinting at the upcoming Iran-EU human rights talks, Qassemi emphasized that the “development of the relationship between Iran and the EU is not conditioned on human rights issues.”

The conservative Mizan news agency, which belongs to the judiciary, published a report Oct. 26 under the headline, “The European Parliament’s issuing of a document for Iran’s slavery.” The article argued, “The EU Parliament resolution provides grounds for cooperation with Iran, but it urges that the cooperation be based on talks that should push Iran toward a more appropriate behavior in the region, observing human rights and economic transparency. In reality, the conditions that Europe has set for normalization of ties with Iran are exactly the [same] policies and demands that the United States has [of Iran]. This cooperation document, which in reality is a document of slavery, shows that Europe has still not separated its way from the United States.”

However, conservative member of parliament Hossein Naghavi Hosseini believes the precise opposite. He told Iran's parliament-affiliated news agency ICANA Oct. 26, “The [EU Parliament’s] resolution for expanding relations with Tehran shows the gap between Europe and the United States. Europe is trying to define its relationship with Tehran separate from Washington.”

In contrast, Mehdi Motaharnia, a political science professor at the Islamic Azad University, told the Reformist Hamdeli newspaper Oct. 27, “Europe’s negotiations with Iran have been conducted following a green light from the United States.“ He added, “Despite the European Union’s disagreements with the United States, it defines itself from a base, which is the Western front.“