Are Egyptian-Saudi disputes just a passing crisis or a decisive storm?

Egyptian-Saudi squabbles over Syria and Yemen have gone viral, and some worry that this will have a lasting negative effect on the relationship between Cairo and Riyadh. 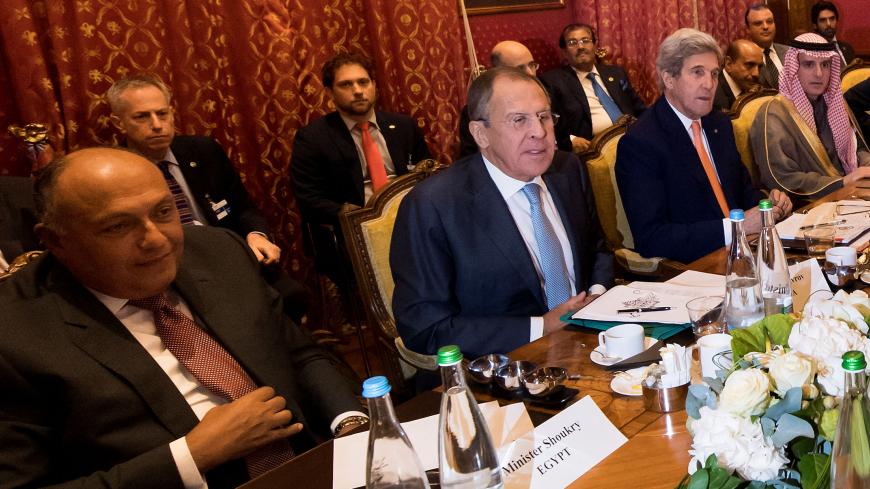 CAIRO — Egypt has witnessed a severe crisis in its relations with Saudi Arabia, the most potent ally of the Egyptian political regime that came to power following the June 30, 2013, popular protests that led to the fall of the Muslim Brotherhood’s regime. The crisis was prompted by Egypt's voting in a UN Security Council session Oct. 10 to support Russia’s draft resolution concerning the situation in Syria.

The Russian draft resolution called for bringing humanitarian aid into besieged areas, urging all parties to halt offensive operations and stressing that moderate Syrian opposition forces must separate from Jabhat Fatah al-Sham — formerly known as Jabhat al-Nusra. The draft was unacceptable to the Kingdom of Saudi Arabia, which seeks to depose the regime of Syrian President Bashar al-Assad, and which viewed Egypt’s vote for the resolution as a deviation from the Arab position.

Abdullah al-Mouallami, Saudi Arabia's representative to the United Nations, launched the kingdom’s first open attack on Egypt, describing the Egyptian representative’s vote in the Security Council for the Russian draft resolution concerning the Syrian situation as “painful.” He said, “It was painful that the stances taken by Senegal and Malaysia were much closer to the agreed-upon Arab decision than the stance of an Arab delegate — the Egyptian one. Though this is a dark day for the Syrian people, they do not know the meaning of darkness or despair and, God Almighty permitting, will prevail.”

These aggressive statements made by the kingdom’s representative drove the Egyptian Foreign Ministry to respond. Ambassador Ahmed Abu Zaid, a ministry spokesman, said the Saudi accusations against Egypt of deviating from the Arab consensus on the Syrian issue by voting for the Russian draft proposal were “not accurate” and “did not reflect reality.” He stressed that Egypt had voted in favor of the content of the resolution, not the state that sponsored the draft, and that Egypt could never stand against a draft resolution that called for a cease-fire, bringing in humanitarian aid and fighting the terrorism confronting the brotherly Syrian people.

The day following the Egyptian vote, Hamda Abd al-Aziz, the official spokesman for the Saudi Oil Ministry, said that the Saudi company Aramco — the largest oil company in the world — had informed the Egyptian General Petroleum Corporation orally that it would not be exporting to Egypt petrol products ranging from diesel to gasoline that had been set monthly at 700,000 tons as part of an agreement between Egypt and the kingdom for a period of five years.

Abd al-Aziz added, “Aramco informed us that it would be halting the set shipments to Egypt throughout the month of October without mentioning any reasons. We do not know whether this decision stems from technical reasons, commercial reasons or other reasons.”

Tweeting under the hashtag #Halting_Oil_Supplies_To_Egypt, Saudi writer Abd al-Rahman Sa’ud discussed the decision to halt supplying Egypt with petrol shipments on his personal Twitter account. In his words, “seeking to awaken political and cultural elites of the time lost is less painful than the loss of billions of riyals, which our compatriots are in need of.” Many Egyptian journalists began to embark on a brutal battle with the Saudi kingdom over the overt pressure it was exerting on the Egyptian regime as well as the harsh criticisms it was leveling at Cairo.

And so on Oct. 12, media figure Ahmad Moussa, known for his close ties to the ruling regime in Egypt, launched a blistering attack on Saudi Arabia on his TV program "Suda al-Balad," saying, “No one can pressure Egypt with flour, or petrol, or gas, or weapons or even dollars. Egypt’s decision-making ability is independent, and no one may interfere in it. We don’t want help or aid from anyone, and no interventions either. We reject all of it. Any state can stop to aid us if it wishes; there are plenty of others.” He concluded, “If Egypt wasn’t around, you wouldn’t be around. … Egypt’s survival means the Arab world’s survival.”

Ibrahim Issa also attacked Saudi Arabia on the show "Al-Qahirah Wan-Nass," saying, “What you’re seeing is states like Libya, Yemen, Iraq, Syria in civil wars because of Wahhabi policies in the region. Every crisis that happens in Arab countries is because of those policies. They caused ‘the destruction’ that we’re living through now in our Arab society.”

On Oct. 13, President Abdel Fattah al-Sisi spoke about the crisis in relations between Egypt and Saudi Arabia at an educational seminar organized by the Department of Morale Affairs for the Armed Forces, saying, “Egypt has adopted an independent policy seeking to secure Arab national security through adopting a national vision. Our position toward the Syrian crisis is fixed and will not change. It relies upon finding a political solution to the present crisis, maintaining the unity of Syrian territories and respecting the will of the Syrian people. Furthermore, armed groups must be disarmed and Syria must be rebuilt.”

He concluded his remarks by saying that “Egypt bows to no one but God alone,” in a veiled reference to the pressures being brought to bear by the kingdom.

Prominent journalist and writer Alaa Abd al-Hadi told Al-Monitor, “There is certainly a crisis between Egypt and Saudi Arabia. Denying it helps no one. However, we must identify the limits of this crisis and [emphasize] our ability to move past it. Both Egyptian and Saudi media must cease inflaming it further, casting blame at the other side. It is very unfortunate that the media, whether Egyptian or Saudi, have played such a fundamental role in igniting the crisis between the two sides and further aggravating it.”

He added, “In my estimation, the main reason for the existence of a crisis between the two countries is a combination of two main issues: Yemen and Syria. Each country has adopted a different approach to both the Yemeni and Syrian crises. In Yemen, Egypt has taken a clear direction in rejecting any ground intervention. Everyone knows about Egypt’s [negative] experience in intervening in Yemen during the era of President Gamal Abdel Nasser; however, the kingdom of Saudi Arabia supports a ground intervention in Yemen. As for the Syrian situation, both sides agree on the importance of ending the crisis and staunching the Syrians’ bleeding. But there is a fundamental difference between the two sides pertaining to the mechanism for bringing about the end of the crisis. Saudi Arabia believes that Assad’s regime must be ousted from power, while Egypt believes in purging the opposition [of bad actors], halting the Syrians’ bleeding and waging counterterrorism to solve the Syrian crisis. This crisis will not end unless every country understands that the other side is justified in establishing its own foreign policy in accordance with its independent interests and vision.”