Internally displaced Syrians share their journey from Idlib province, where they suffered under the opposition's siege, to Latakia, where they found refuge but also hostility. 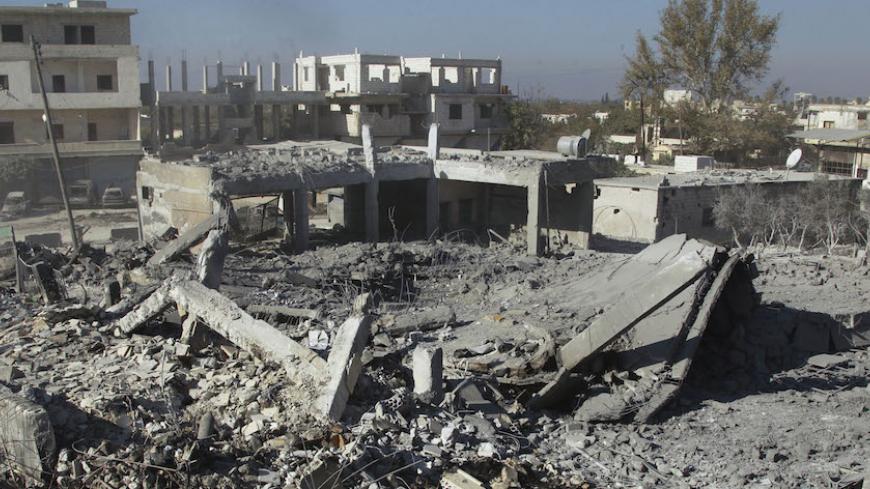 Collapsed buildings are pictured after what activists said was a US-led airstrike on Harem in the countryside of Idlib, Syria, Nov. 7, 2014. - REUTERS/Ammar Abdullah

LATAKIA, Syria — “They told us they’ll kill us, and they’ll kill the babies inside of us,” said Mariam Hussein, describing the horrors her neighborhood faced before her family fled in the middle of the night.

Sitting inside a small classroom she converted into a home for herself and her four children, Mariam has been living in the Sports College in the middle of Latakia city for the last four years along with 262 other extended family members who fled their home in Harem, Idlib, following fierce battles and a harrowing siege. The siege was imposed by opposition fighters in the area in the summer of 2011 and evolved over the next 18 months.

Harem, which was once home to around 22,000 people, the majority of them Sunnis, is situated right across the border from Turkey. When the protest movement began in 2011, many of Harem's neighborhoods remained pro-government, including the one where Mariam and her family lived.

“There was nothing in the world better than our lives in Harem,” she said. “We wanted for nothing. We were all very happy, working on our lands in the area.”

In May 2011, skirmishes began in Idlib, and by that fall there was a full-on war. The citizens of Harem, including many of Hussein’s relatives and her husband, picked up weapons and fought alongside the government forces to protect their homes from attacks by opposition fighters. By the end of 2011, Harem itself was increasingly isolated, falling under opposition-led sieges several times.

The final siege began around September 2012, and the defending forces — made up primarily of local volunteers, National Defense Forces and other pro-government groups as well as a small contingent from the Syrian army — barricaded themselves in the historical Harem Castle and its adjacent neighborhoods, located less than a kilometer from the Turkish border.

Local sources put the number of civilians under siege at the time at approximately 5,000, mostly women and children.

According to Haj Ibrahim Mahmoud, the elder who oversees the community residing in the Latakia compound, the opposition fighters present in the town were largely from Islamist groups Ahrar al-Sham, al-Qaeda-affiliated Jabhat al-Nusra (now rebranded as Jabhat Fatah al-Sham) and Nour al-Din al-Zinki — the group that recently beheaded a 14-year-old Palestinian boy in Aleppo.

“It was a nightmare,” said Mariam, adding, “We would watch the fighters coming in and out across the border with Turkey, and they would rain everything on us from there: mortars, bullets, everything was hit.”

The opposition fighters would transport weapons from Turkey to use against the residents of Harem, laying siege to those who refused to turn against the government. “They would refuse to let anyone out, and our children would wake up crying at night, starving. We stayed in this situation until we finally fled,” said Mariam.

She lost 30 members of her family, including her husband and two brothers who were killed while defending their neighborhood. “My husband was injured in the battles, and we were not allowed to move him from the house because they would kill him, so we had to sit and watch him slowly die over a period of 14 days,” she said.

Doha described living under siege and going days without eating. “It was so scary, we couldn’t move beyond our street and the only thing we had to eat was borghol [cracked wheat],” Doha said.

According to Mariam, the government attempted to make aid drops, but more often than not missed their targets and the packages would either land elsewhere or be taken by the opposition fighters in the area.

After months under siege, the residents escaped in the middle of the night. Mariam quickly dressed her young children, including her son Jomaa, who was only six months old at the time, and snuck out of the house. “We left everything behind. Papers, identity documents, pictures,” she said. “We literally left with just the clothes on our backs.”

Walking for several hours in pitch blackness across the rugged mountain terrain, the dozens of families refused to stop at any point for fear the opposition fighters would catch up and slaughter them.

Today, they are all living in the Sports College in Latakia city, a building the government has converted into temporary housing for the internally displaced. Behind the tall metal doors lies the three-story building; each classroom now houses a family. They cook in the hallways and there is one bathroom on each floor serving the 52 families residing there.

But even their refuge in Latakia has been problematic. Despite the government providing education, electricity and water to the compound, as well as deliveries of food and medicine packages on a regular basis, those from Idlib feel like outsiders in their own country.

The children barely leave the compound to play in the parks outside, preferring to remain behind the metal doors and playing on the hard concrete.

“All I dream about is going home, back to Idlib, where I belong,” said 11-year-old Adeeb, explaining that being in Latakia is “nice but not always nice at the same time.”

According to local government figures, Latakia’s population grew from 1.25 million to 2.5 million by the end of 2015, housing Syrians displaced from neighboring areas including Idlib, Aleppo and the Latakia countryside. Yet those who fled Idlib have struggled to feel at home, saying the locals of Latakia have been hostile to them.

It seems that the hostility emanates not from sectarian hatred but from political issues and a growing distrust for those who have come from opposition areas as refugees.

Prior to the war, the city of Latakia was home to a mixed population of around 700,000 Alawites, Christians and Sunnis. After the war began and the internally displaced began moving to the province, many of them bought apartments. According to one report, 78,000 apartments have been bought in Latakia by Syrians who had left Aleppo and Idlib.

“They are afraid of us. As soon as they hear our accent, they make comments to us,” said Mariam. “It is impossible for us women to find work here too, because we don’t look like them or dress like them, so no one wants to hire us,” she said, indicating that their clothing is more conservative than what women in Latakia city wear.

Mariam said the aid from the government is not enough. “Every week, we get a delivery of 16 eggs for a family of five, plus a kilo of potatoes, tomatoes and yoghurt.” She said this is not enough to feed her family properly, and sometimes the food is bad.

“My husband and my brothers fought alongside the army, alongside the government to protect our homes, but because they were volunteers and not part of any pro-government groups, after they died, the government paid nothing to take care of their families,” she said. “I want to work, but no one will give me a job.” Instead, one of her relatives works as a taxi driver in a rented car, using his meager income to meet the needs of three families.

Even the children have issues at school. The girls face bullying at the hands of the other children, including mockery for their clothes or simply for being from Idlib.

“Most of the time we keep to ourselves because they don’t talk to us,” explained 15-year-old Wahoud. “But when they do, they make fun of our clothes and the fact we wear the same ones all the time.”

“We want nothing more than to go back to Harem,” she said. 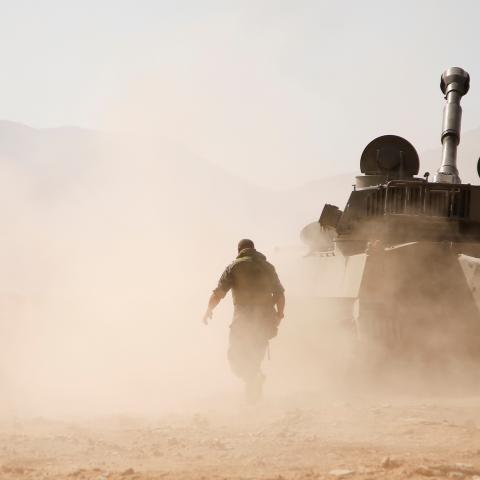