Palestinians on both sides seethe over postponed elections

Palestinians are disappointed by the postponement of the local elections, and with the political divide as deep as ever, the wide disillusionment and frustration plaguing both the West Bank and Gaza is giving way to apathy. 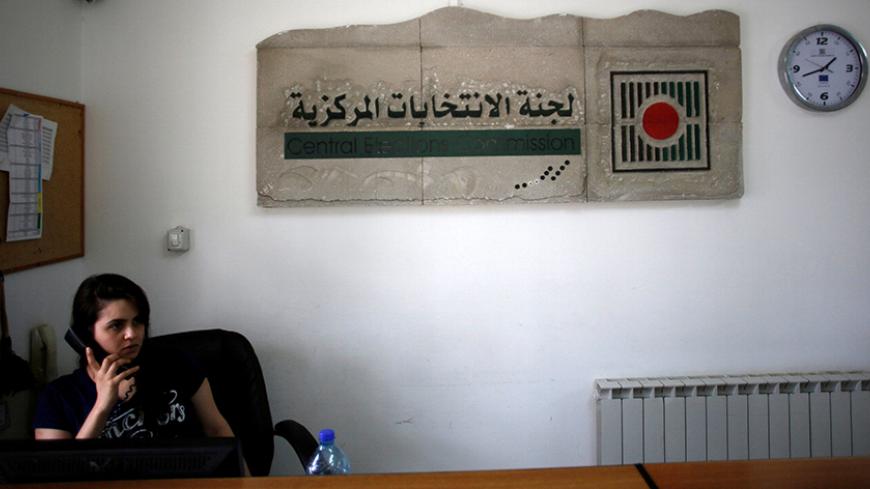 A staff member speaks on the phone in the office of the Central Elections Commission in the West Bank town of al-Bireh, Aug. 17, 2016. - REUTERS/Mohamad Torokman

GAZA CITY, Gaza Strip — Frustration and discontent prevailed among Palestinians on Sept. 8, after the High Court of Justice in Ramallah postponed the local elections indefinitely.

The court's decision followed a number of appeals presented by several lawyers, challenging the legitimacy of elections that would not include East Jerusalem and the lack of appropriate conditions for holding them. The appeals also challenged the legitimacy of the Gaza courts and judiciary tasked with evaluating them.

Mohammed al-Najjar, who sells vegetables in the popular Khan Yunis market west of Gaza City, told Al-Monitor he was angry at the postponement. “We were hoping the local elections would lead to legislative and presidential elections … that would improve our bad economic situation. My family and I registered to vote, but the elections were unfortunately postponed.”

Najjar raised his voice for everyone in the market to hear when he added, “We want to tell Palestinian officials in the West Bank and the Gaza Strip, ‘Stop undermining our suffering. If you cannot find a solution for our economic crisis and our psychological suffering, then you should all leave.’”

Yahya Mansour, who works as an accountant for a charity association called Al-Weaam, told Al-Monitor, “I expected the local elections to fail from the very start. The political conditions in light of the division between Fatah and Hamas are not suitable to hold elections. The political division is greater than any democratic process. It would be better to form a true national consensus government between Gaza and the West Bank to pave the way for any future democratic process.”

Mansour added, “The local elections would have been a great opportunity for Palestinian municipalities to regain their legitimacy, as the terms of the local councils that are currently operating have ended. However, the decision to postpone the elections proved that no Palestinian political institution is legitimate. They are all expired, starting with the presidential administration, the Palestinian Legislative Council and the local municipalities.”

Mohamed Shaheen, who has a degree in business management but has been working as a cab driver in Gaza for the past four years, told Al-Monitor, “We wasted our youth waiting for the elections. Every time we go register our names to vote, the elections get canceled. This is a political farce.”

He added, “The elections represent a unified stance before the international community that wants to help us, but the division between Gaza and the West Bank is hindering international relief aid for the reconstruction of Gaza, which was destroyed by three wars. Thus we have no job opportunities. This situation will never change unless democratic elections are held.”

In a report issued by the United Nations on Aug. 26, Robert Piper, the UN coordinator for humanitarian aid and development activities in the occupied Palestinian territories, said, “Addressing economic recovery requires much greater financial investments and serious policy changes, including a lifting of restrictions on both imports and exports," and "Improved cooperation between Ramallah and Gaza City is also a prerequisite to get greater momentum.”

Bushra Zatma, from the Yibna refugee camp in Rafah, southern Gaza Strip, told Al-Monitor, “We are helpless. The postponement of elections shows that the political parties’ intentions were not sincere, especially those of Fatah and Hamas. The educational and health sectors are suffering along with the deteriorating economy in Gaza. The situation will keep going downhill unless democratic elections put an end to the division.”

The Palestinian local elections had been scheduled for Oct. 8 in 416 towns and villages spread over 16 provinces in the West Bank and the Gaza Strip, at a cost of up to $8 million. The total eligible voters were estimated at nearly 2 million, around 800,000 of them in the Gaza Strip.

Abdullah Shakshak, a Hamas government employee in Gaza, told Al-Monitor, “Palestinians are concerned and weighed down by pain. They have lost hope and trust in any political faction in the Palestinian arena, and Palestinian President Mahmoud Abbas is exclusively making all political decisions with obvious dictatorship and without any consideration for the legislative institutions or the Palestinian judiciary. Thus, the decision to postpone the elections was his and his only.”

Shakshak added, “Any future local elections will be meaningless. We first need presidential and legislative elections before any other election, so as to end the Palestinian crisis of legitimacy when all parties to the conflict accept the official decisions produced by the elections.”

Journalist Imane Baroud told Al-Monitor, “The citizens are the ones most affected by the postponement of the local elections. Unfortunately, officials live peacefully in the West Bank and Gaza and we are the ones suffering from low wages, poor municipal services, poor infrastructure and high taxes, in light of the difficult economic and political situation. The decision to postpone or cancel the elections does not serve anyone. All factions agreed on the democratic process and signed a Charter of Honor to ensure the elections would be held in a timely manner.”

Baroud called on the international community “to pressure all political parties in the Gaza Strip and the West Bank to hold the elections under international supervision to ensure the proper conduct of the electoral process, because the citizens are angry at everyone.”

No one knows when an agreement might be reached to set a new date for the local elections, as the failure of this attempt — which was to include Hamas for the first time since it took over Gaza in 2007 — revealed the complexity of the internal situation. The biggest loser remains the Palestinian citizens, who are suffering under economic and political conditions that worsen by the day.