How much leverage do Salafists have in Egypt's parliament?

Rumors emerge about the Nour Party’s intentions now that it is being criticized for failing to represent its Salafi constituency. 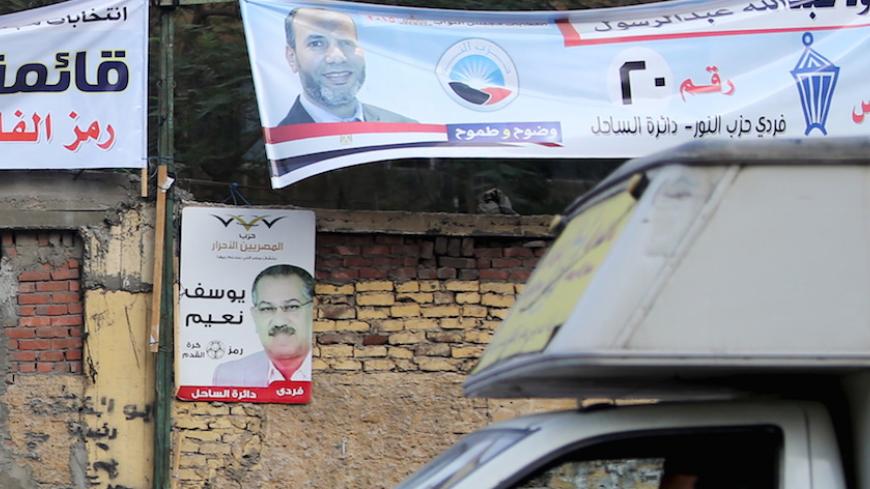 Electoral banners for the Nour Party (top) are seen in Shubra area in Cairo during the second day of the second round of Egypt's parliamentary elections, Nov. 23, 2015. - REUTERS/Mohamed Abd El Ghany

CAIRO — A number of Salafists are calling for the Nour Party to suspend its activities in parliament, saying its lawmakers failed to block legislation they believe contradicts Sharia. Among their examples, they cite the recent law on building churches and the law increasing criminal penalties for female genital mutilation.

The Nour Party has also hinted it might boycott the next municipal elections; in an internal referendum, about 80% of Salafi party members and supporters were opposed to participating.

The Nour Party is the only representative of the Islamist movement in the House of Representatives (Egypt’s parliament). The movement, particularly the Muslim Brotherhood, was excluded from political life after the events beginning on June 30, 2013, where the military deposed President Mohammed Morsi.

Judge Tahani al-Gebali, the former deputy head of the Supreme Constitutional Court and the head of the Republican Alliance Party, discussed the Nour Party issue with Al-Monitor.

“Since June 30 [2013], all parties operate under the idea that the state is secular and no party should claim to speak for God. This is because Egypt is protected by the constitution, especially the second article, which states that Islam is the religion of the state, Arabic is its official language and the principles of Islamic Sharia are the principles of legislation in Egypt. All parties, regardless of the difference of their ideologies, oblige themselves to the general principles of Islamic Sharia,” Gebali said.

“The popularity of parties based on religious thought is declining in general. Such a decline was obvious in election results and the indifference of public opinion toward the Nour Party,” she added.

Gebali said the idea of basing an entire political party on religious references is questionable. She believes the Constitutional Court should decide the legitimacy of the Nour Party in the political arena.

“The withdrawal of the Nour Party at such a time is considered to be politically clever, as it would retreat from a political role — something it hasn’t been effective at currently — and rather engage in preaching work, an area the party is actively involved in.”

Such a move would be designed to renew the party by pumping in fresh blood and by tugging at the emotions of current members in an attempt to persuade them that their withdrawal comes in defense of Islam.

She said the greater risk for the party is that if it continues to use issues that have religious components to stir controversy, it will increase friction between secular and religious parties. She called this “the fight between the groups of darkness and enlightened secular thought deeply based on citizenship.”

Gebali said, “The emergence of religious parties came as a result of the weak education, economy and culture the Egyptian state suffers from, and of the revolutionary tolerance for Islamists after the January 25 [2011] Revolution.”

She rejects the idea of letting these parties continue their political activities under the rationale that their only alternative is more terrorism and radicalism, as “Egypt, throughout its history, could not coexist with these parties.”

Nevertheless, she also pointed out that a full withdrawal of the Nour Party from parliament could threaten parliament’s legitimacy in representing the people. The party’s withdrawal, if it and other events wound up breaching the quorum, could result in calls for early parliamentary elections.

Hassan Nafea, a political science professor at Cairo University, told Al-Monitor that Nour Party supporters’ rejection of the law on building churches is dangerous, since this stance directly contradicts the constitution, which guarantees all citizens the right to freedom of religion.

He said, “The rejection also warns that there is a sector of the population that refuses equality among citizens and rejects that citizens from other religions should practice their religious duties in their houses of worship.”

Nafea said he would not be pleased if the party withdrew over the church or female genital mutilation laws, as this would mean the party is out of touch with the real political, social and economic problems afflicting citizens, such as the value-added tax and issues related to freedom such as the protest law and the surge in prices.

According to Nafea, holding early elections is unlikely, as the Nour Party holds only 12 parliament seats out of almost 600. Even if it withdraws or freezes its membership, this will not affect the majority at all and will not affect the quorum or the voting. The same goes for all political parties, he said, as together they hold 246 seats, which constitutes only 41% of the total. This means that the Egyptian parliament is divided and the regime is the only beneficiary.

Kamal El Helbawi, a former spokesman for the Muslim Brotherhood in the West Delta, said, “Parliamentary life will not be disrupted by the withdrawal of the Nour Party or of anyone else, as Egyptian parties are weak and none of them today seek power.” Helbawi was part of the 50-member constitutional committee that drafted the Egyptian Constitution in 2014.

Helbawi told Al-Monitor there will not be calls for early elections, only by-elections in the wards where Nour representatives withdraw, similar to what happened in March when Tawfiq Okasha was ousted from parliament after he hosted the Israeli ambassador at his house.

Anwar El Sadat, the president of the Reform and Development Party and head of the parliamentary Human Rights Committee, thinks the talk of Nour's withdrawing is overblown.

“The Nour Party is still [playing] its role in the parliament and it will continue to do so. The rumors circulating about freezing its membership inside the House or even withdrawing are totally unfounded,” he said.

Sadat also denied rumors that the Nour Party leaked the idea that it might withdraw as part of a plot. “If any plots exist, they are more likely to be from enemies of the Nour Party who want to show it as a sectarian party that puts pressure on the state,” he said. All indicators show that the party will participate for the upcoming elections for municipalities, he added.

A number of Nour Party representatives, including parliament member Abdulhakeem Massoud, refused to comment to Al-Monitor. Massoud said the only representative allowed to make statements is Mohamed Salah, the spokesman for the party's parliamentary bloc, but he was unavailable for comment.