Israeli politicians from across the political map are advancing a law to allow Israeli expatriates, not just diplomats, to vote in absentia in Israel's elections. 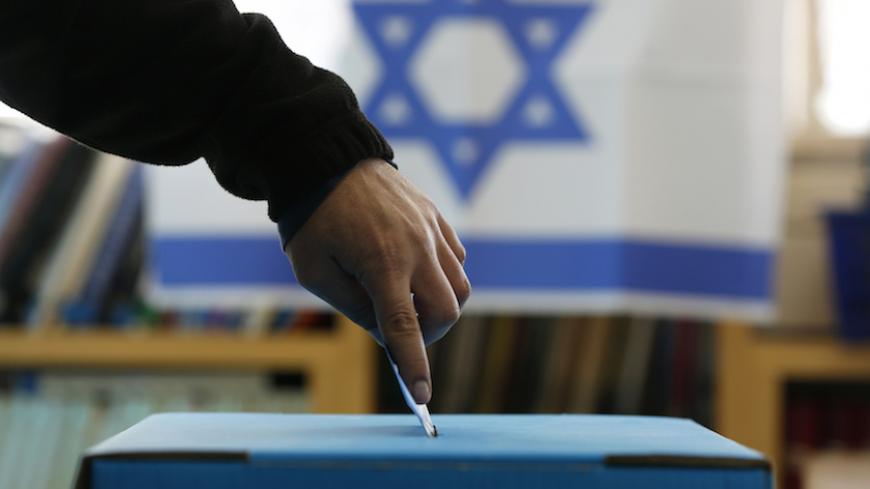 An Israeli flag is seen in the background as a man casts his ballot for the parliamentary election at a polling in the West Bank Jewish settlement of Ofra, north of Ramallah, Jan. 22, 2013. - REUTERS/Baz Ratner

As they do every four years, millions of US citizens will take part in the presidential elections in November. Some 300,000 eligible voters live in Israel, and judging by previous elections, tens of thousands will exercise their right to cast absentee ballots.

Unlike the United States, which grants all its citizens the right to vote anywhere and under all circumstances, most other countries set certain limitations on the rights of their citizens to vote from abroad. Israeli law grants the ability to exercise this important democratic right only to members of its diplomatic corps and to employees of the Jewish Agency, the World Zionist Federation, the Jewish National Fund and the United Israel Appeal. Still, while law enables murderers and other convicted felons serving jail terms to take part in the democratic process, the same law revokes the voting rights of students, university professors, employees of private firms, tourists and other Israelis away from their permanent places of residence on election day.

I had the opportunity to experience this discriminatory law's implications for myself and my bank account 20 years ago. During the 1996 elections for the 14th Knesset and the premiership, about six months after the assassination of Prime Minister Yitzhak Rabin, I was stationed in the United States as a correspondent for Haaretz. To exercise my right to vote, I was forced to buy an expensive airline ticket and fly to Israel. My wife, who worked at the Israeli Embassy in Washington, also crossed the ocean to get to the ballot box in Jerusalem. Her colleagues, in possession of diplomatic passports, cast their ballots without having to leave the embassy building. But she was a “local hire” and thus ineligible to vote abroad. A young ultra-Orthodox man who sat beside us on the plane back to New York told us proudly that he had voted 13 times, using the IDs of former Israelis from his community. The relatives of these former Israelis "forgot" to report to the Israeli Interior Ministry that they had passed away, and so their names remained on the voters list.

Those elections brought to power Prime Minister Benjamin Netanyahu, who beat former President Shimon Peres by 30,000 votes. We will never know what the results would have been had all Israelis temporarily residing abroad been allowed to exercise their right to vote. According to the Central Bureau of Statistics, as cited in the Jewish People Policy Institute’s (JPPI) report, some two-thirds of Israelis who leave the country do so for relatively short periods of one to five years. The JPPI’s researchers calculated that the votes of Israelis residing abroad for up to four years are “worth” two to three Knesset seats.

Initiatives to expand the circle of Israelis allowed to cast absentee ballots have been submitted to the Knesset several times in the past few years. Former Likud Minister Moshe Arens presented such a proposal in 2001, and it was discussed at the Constitution, Law and Justice Knesset Committee in 2002. The coalition agreements of the current government include a clause committing the government to propose a law enabling Israelis overseas to vote in Knesset elections, under terms agreed upon on all coalition factions.

In recent days, Knesset members from both the coalition and opposition parties have joined forces to promote a bill that would allow any Israeli citizen registered to vote to vote at Israeli diplomatic missions abroad. This mechanism should eliminate the problem of double voting with the IDs of deceased people. The bill’s sponsors include Knesset members Sharren Haskel and coalition chairman David Bitan of the ruling Likud, Yoav Ben-Tsur of the government coalition’s Shas and Itzik Shmuli, Eitan Cabel and Stav Shafir of the opposition Zionist Camp.

For some reason, the conventional wisdom has it that such a change would benefit the right. But the social-economic profiles of Israelis living abroad temporarily to study, work or conduct business (unlike that of permanent residents abroad) are more like that of voters for centrist and left-wing parties. It’s no coincidence that the list of sponsors is devoid of Arab Knesset members. According to the Central Bureau of Statistics, Arabs constitute no more than 20% of Israeli citizens abroad.

As of now, Netanyahu supports the law. Still, at the 2010 launch of the “Voting only in Israel” campaign, Knesset member Tzipi Livni, then the leader of Kadima, said, “I was glad to hear that Netanyahu has started hemming and hawing and changed his mind. … It usually starts out with some questionable deal, and the moment public pressure is brought to bear they start thinking how to extricate themselves.”

The sponsors of the current proposed change in legislation recommend that only those who pick up their voter registration forms from the Interior Ministry at least a year before scheduled elections be allowed to vote. The Jewish People Policy Institute recommends that voters register in advance and declare their intention of returning to live in Israel as a condition of being allowed to cast their ballot abroad. A proposed bill formulated this year by the Israeli Democracy Institute (IDI) also sets forth a series of limitations. Nonetheless, the IDI researchers express “concrete concern” that various elements guided by narrow political interests will seek to change the criteria in such a way that the right to vote will also be granted to those living abroad on a permanent basis.

This concern is not unfounded. Public attitudes toward Israelis emigrating and leaving Israel permanently has undergone a sea change in recent years. In 1976, Rabin insultingly labeled those Israelis who left for good “the fallout of weaklings.” These days, politicians on the right, such as HaBayit HaYehudi Justice Minister Ayelet Shaked and Likud Internal Security Minister Gilad Erdan as well as Zionist Camp leader Isaac Herzog, flock to the annual Israeli-American Conference. This change in attitude toward Israelis living abroad is indicative of the normalization process in Israeli society. Rabin slandered the "weaklings" at a time when Israel was still licking its wounds from the 1973 war. It was a time when leaving Israel (known in Hebrew as "going down," as opposed to "going up" to Israel) was considered akin to leaving the wounded behind in the battlefield. Those leaving used to apologize, but 40 years later, no one calls them "down-goers" any longer. Some, especially those who have done well financially and have become political donors, are accorded respect and prestige.

If politicians award these Israelis with the opportunity to politically influence the country they left behind, it will be interesting to see how many of them actually trouble themselves to exercise their right to vote. Given the state of Israeli democracy, it would be quite understandable if they opt to put their time to another use.