When Arab-Israeli actors read a poem and held hands in a show of unity at Israel’s Academy Awards, a protesting Culture Minister Miri Regev walked out and returned to criticize the film industry’s “elitism” and threaten to cut funding. 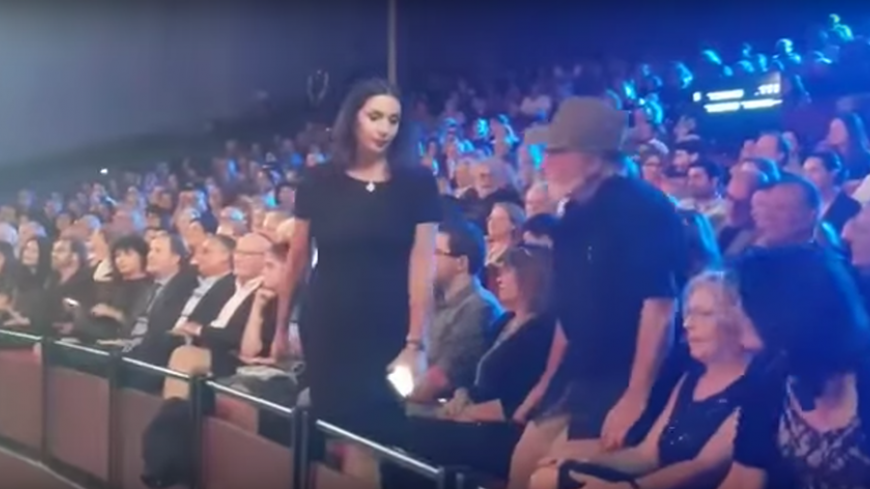 A still from a video capturing Israeli Minister of Culture and Sport Miri Regev's departure from the Ophir Award ceremony in protest at the reading of an excerpt from Palestinian poet Mahmoud Darwish's poem "ID Card," Tel Aviv, Sept. 22, 2016. - YouTube/Ziv Rozenblatt

The newest Israeli tempest sidelined the protests of Arab film producers at the Ophir Award ceremony of the Israeli Academy of Film and Television on Sept. 22. Instead of inspiring public discussion of the feelings and concerns of Arab artists regarding the direction taken by the Israeli film industry, everyone's attention turned to Minister of Culture and Sport Miri Regev. During the reading of an excerpt from Palestinian poet Mahmoud Darwish's poem "ID Card," intending to generate a discussion on the place and identity of Arab citizens in Israeli society, Regev decided to abandon the hall, and all eyes followed her.

It all started a few days before the ceremony, when the management of the Israeli Academy of Film vetoed the plan for Arab-Israeli rapper Tamer Nafar and Israeli producer Yossi Tzabari to appear onstage to read a section of the poem. As a compromise, it was agreed between the sides that the two artists would indeed do a reading from it onstage, but omit the controversial part of the poem about "the usurper," meaning the occupation: "But if I become hungry, the usurper’s flesh will be my food. Beware, beware of my hunger, and my anger!"

The angry exit by the culture minister during the performance was received in the hall with equanimity, as her actions were predictable. But afterward, when Regev got up to speak, accusing the Israeli movie industry of elitism and operating like an exclusive club that does not offer equal opportunities, and as usual threatening to cut government funding, there was an uproar in the hall.

The Israeli film harvest this year has been one of its most diverse and pluralistic, yet this did not stop Regev from expressing her usual accusations and threats that caused the eruption of anger in the audience. Thus Regev herself became the center of attention and all the other issues presented by the ceremony’s participants were pushed aside.

Tamer Nafar, who has kept silent since reaching a compromise with the academy’s directors, agreed to give his first interview to Al-Monitor and talk about the reactions by Arab artists to the way the local film industry operates and how trapped they find themselves, especially in the past year.

“Miri Regev is only an excuse. She is the symptom of Zionist thinking,” Nafar said. “She talks about the ‘weak’ and the ‘weakened’ in the film industry, but on the other hand she denies the Nakba and gets annoyed when the Arabs in Israel call themselves Palestinians. The members of the film academy do not agree with her. They boo her, but ultimately they toe the line that she sets out. A few months ago Regev said that her ministry will not support so-called ‘subversive’ films, and this year, indeed, 23 [new Israeli] films were screened — not one of them deals with the Israeli-Palestinian conflict or the occupation.”

According to Nafar, “If you look at the casting of Arab actors in films, they are only grist for the mill. They are not allowed to express themselves, [nor are we allowed] to recognize or identify with their suffering.”

Nafar is not impressed by the fact that the Best Film prize was awarded to "Sand Storm," with an all-Arab-Israeli cast. “I saw the movie,” he said. “It’s a good film. The acting and cinematography are wonderful. The story is amazing. But it deals with female alliance and fellowship in a National Geographic style. You don’t see houses being destroyed, the Judaizing of Bedouin lands and discrimination against them and there’s also no ethnic cleansing.” Nafar claimed that in interviews promoting the film, the Arab actresses were barred from talking about these subjects.

Nafar is the star of Udi Aloni’s film "Junction 48." This film, set to be screened in the United States early next year, also does not address the heart of the Israeli conflict; it deals with a Palestinian rapper in the poor Israeli town of Lod who dreams about achieving a smashing success against all odds. It's exactly like the story of Nafar’s life. When he rose to receive the prize for writing the film's musical score, he told the audience excitedly, “I love the arts in general and I really love the fact that you are embracing my art, but I would appreciate it if you also embrace our Palestinian identity — that is, our narrative.”

In his conversation with Al-Monitor, Nafar said that the most touching moment of the ceremony was when all the Arab actors held hands and demonstrated a moment of unity. All of them stood united opposite Regev, in a gesture that on the one hand expressed the desire to be part of the Israeli existence: an integral, contributing part, fruitful and thriving in the local film industry. But on the other hand, they are not willing to concede their narrative and their past.

Nafar told Al-Monitor that although no one will admit it, the Israeli film industry toes the right-wing Regev line. He claimed that although film industries are supposed to be critical and "kick" the establishment, people are afraid that the culture minister will carry out her threats to cut funding. Nafar feels that talented Arab actors understand that they could soon have no future in the Israeli film industry, because they won’t have any roles. “They won’t be willing to accept the Uncle Tom film roles they are given, even at the risk of angering the Israeli establishment and the Israeli public. All we want is that you understand our narrative. Nothing more than that.”