Can Rouhani reel in the IRGC's financial empire?

Still under fire by hardliners over the nuclear deal, Iran's President Hassan Rouhani is now confronting them over compliance with international banking regulations. 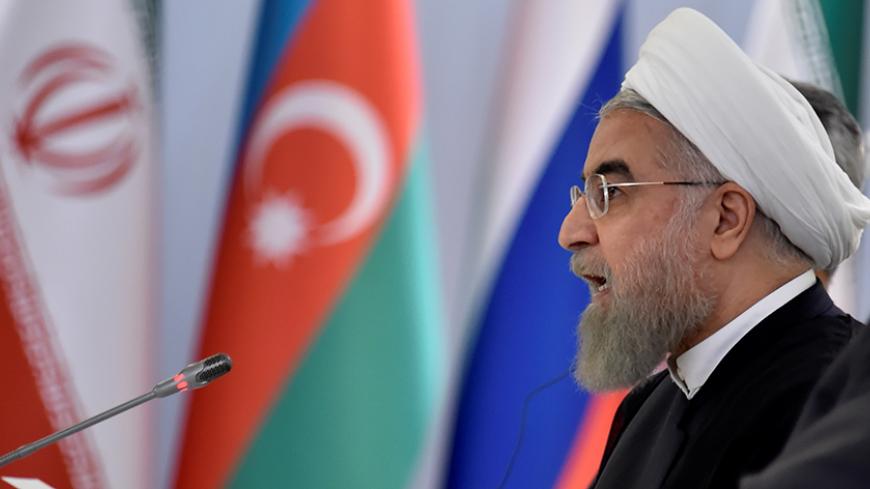 For months, Iran’s hardliners have used the term “JCPOA” — the Joint Comprehensive Plan of Action — to undermine the credibility of President Hassan Rouhani's administration. Over the past couple of weeks, they have adopted the term “FATF” — the Financial Action Task Force — which according to the Iranian hardliners represents a “capitulation” of Iranian interests to Western powers. As with the JCPOA, chances are that opposition to the implementation of FATF rules in Iran is based on politics rather than facts. Rouhani's opponents realize that non-compliance with the FATF will limit the economic benefits of the JCPOA and hence undermine the president’s credibility in the eyes of the general public and the business community.

The FATF is “an inter-governmental body established in 1989 … to set standards and promote effective implementation of legal, regulatory and operational measures for combating money laundering, terrorist financing and other related threats to the integrity of the international financial system.” Of note, the process for Iran becoming a member was initiated during the administration of President Mahmoud Ahmadinejad (2005-13).

In May 2010, the government presented the Bill to Fight Terrorism Financing, and the parliament approved it the following month. The legislation then entered the bureaucracy of the Guardian Council, which subsequently sent it to the judiciary for amendments, as it also entailed actions and legal changes in the judicial system. After years of making its way through various bureaucracies, the amended bill was passed by parliament on Feb. 3 of this year. The Guardian Council confirmed the statute March 5. The law obliges the government to “exchange data and information according to its international commitments” in fulfilling the objectives of this law.

Collaboration with the FATF is not only a crucial step in implementing Iranian law, but also a necessity in repairing banking relations between Iran and the international financial community, especially first-tier international banks that still refuse to engage with Iran. There is no doubt that the post-JCPOA internal climate paved the way for the law's passage and that the statute has empowered the Iranian government to address critical issues in its banking and financial sector.

In its past statements on Iran, the FATF had voiced concern over Iran’s failure to address the risk of terrorist financing and the serious threat this poses to the integrity of the international financial system. The FATF also urged member states to protect against correspondent relationships when considering requests by Iranian financial institutions to open branches and subsidiaries in their jurisdiction. These and other recommendations by FATF underline why international banks and financial institutions have been hesitant to re-engage with Iran.

Despite Tehran’s efforts, the FATF kept Iran on its blacklist after its most recent meeting, on June 24. In a statement, the FATF welcomed “Iran’s adoption of, and high-level political commitment to, an Action Plan to address its strategic deficiencies, and its decision to seek technical assistance in the implementation of the Action Plan.” The FATF therefore suspended counter-measures for 12 months in order to monitor Iran’s progress in implementing the Action Plan. Evidently, if Iran meets its commitments under the plan during that time, the FATF will consider next steps for moving forward.

Essentially, the Iranian government and the Central Bank of Iran (CBI) have committed themselves to implementing the Action Plan to address the above-mentioned concerns. Recent announcements by Bank Mellat and Bank Sepah that they will limit hard currency transactions by Khatam-al Anbia, the construction arm of the Islamic Revolutionary Guards Corps (IRGC), are the first small steps in introducing a new level of compliance in the banking sector. Full compliance with FATF rules would entail that banks not provide financial services to entities that are blacklisted due to criminal, money laundering or terrorist activities.

Consequently, the government and CBI are currently engaged on three distinct fronts: instructing Iranian banks and financial institutions to introduce new compliance protocols; interacting with the FATF and other political bodies to convince them that the country’s banking sector is moving in the right direction; and confronting nonsensical political criticisms from hardliners who are prepared to go to any length to present the Rouhani administration as a failure.

Those political figures who understand what the FATF is about but still want to hurt the administration argue that complying with the FATF is equal to self-imposing sanctions on the country’s banking sector. They argue that the disclosure of information about banking customers and transactions would open the door to further anti-Iran initiatives and potential sanctions. They, however, need to appreciate that Iran’s reintegration into international trade and financial flows fully depends on implementation of FATF rules and regulations.

In the meantime, and in the light of legitimate sensitivities, Iran’s Supreme National Security Council has looked closely at the FATF commitments. On Sept. 14, Ali Shamkhani, the council's powerful secretary, announced that the council had reached positive conclusions about the FATF, but that a final decision would be made by Supreme Leader Ayatollah Ali Khamenei.

It would come as a big surprise if Khamenei rejected the anticipated cooperation with the FATF, which is a logical extension of the JCPOA, which he had approved. One can, however, anticipate some language that will underline his distrust of entities, such as the FATF, dominated by the United States and its allies.

While politicized statements by Rouhani's opponents will continue, similar to the ongoing opposition to the JCPOA, the government will proceed to implement reforms in the banking sector to facilitate the reconnection of Iranian banks with first-tier international banks. A big challenge, however, will be the regulation of Iranian banks that are controlled by semi-state institutions, such as military and revolutionary foundations closely affiliated with the IRGC.

Iran’s genuinely private banks will be quick to adapt and introduce the needed compliance structures, but governmental and semi-state banks will be slow and will present the government and the CBI with major challenges. The banks and enterprises that are still blacklisted by the United States and the European Union are all part of a complex web of interests, and it will be difficult to fully disentangle their affiliations and to introduce the required levels of transparency and compliance. Given this, Tehran might miss the June 2017 target that the FATF has set before its next assessment, but it is certainly moving in the direction of modernizing its financial sector and complying with international banking standards.