Egypt's long-suffering tourism business might finally be getting some good news: The private sector will take a crack at handling one of the country's ancient sites. 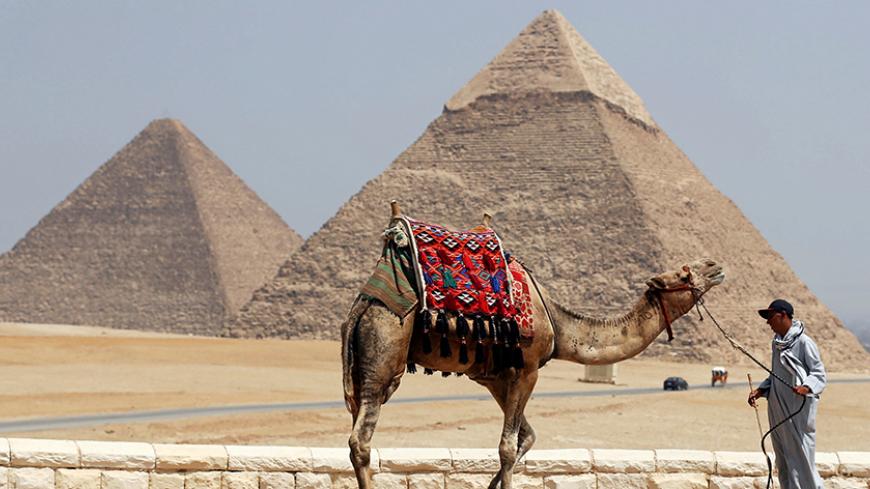 A man waits to rent his camel to tourists in front of the Great Giza pyramids on the outskirts of Cairo, Egypt, Aug. 31, 2016. - REUTERS/Mohamed Abd El Ghany

One day after yet another report came out summarizing the wretched state of Egypt’s tourism industry, government officials said they will turn management of the Giza pyramids over to the private sector.

The prime minister’s office said Sept. 6 the decision is part of an effort to develop the archaeological area to a level befitting its status as a World Heritage site.

Tourism in Egypt has been suffering severely for the past five years. According to an economic performance report issued Sept. 5 by the Ministry of Planning, the tourism sector shrank by 34% during the period from January to March, compared with 9.3% during the same period last year.

Moody’s Investors Service issued a report in July stating that Egypt’s tourism sector brought in revenues of $551 million during the period from January to March, which is the smallest amount since the comparable quarter in 1998.

In June, the tourism sector registered its worst monthly drop of this year, with the number of tourists visiting Egypt plummeting 60% compared with June 2015. According to a report issued July 28 by the Central Agency for Public Mobilization and Statistics (CAPMAS), the number of tourists in Egypt stood at 328,600 in June, compared with 820,000 in the same month last year.

On top of that, what first looked like a potential bright spot in a CAPMAS report for July still reflected a major decline. In July, the number of tourists reached 529,200 — the highest figure since a Russian plane exploded in October after taking off from the Sharm el-Sheikh International Airport. Yet, that number still showed a drop of 41.9% from July 2015.

According to Sami Mahmoud, head of the Egyptian Tourism Authority, assigning the management of tourist attractions to private companies shows Egypt’s desire to pull as much profit as possible from the sites. Mahmoud told Al-Monitor that the authority proposed the change three years ago and has been studying the idea with Ministry of Tourism experts.

Mahmoud specifically cited the need to turn around the reputation of the Giza pyramids area, which has suffered from what he described as chaos and irresponsible management.

Mahmoud expects the chosen company will apply a sophisticated administrative approach based on a clear plan to be discussed with officials of the Ministries of Tourism and Antiquities. Mahmoud believes private sector companies are best-suited to manage all tourist attractions in Egypt and that this system has been adopted in many countries that rely on tourism as a source of national income.

Mahmoud anticipates that revenues of all the tourist attractions will rise if reputable companies are allowed to invest in this field.

Bassem Halaqa, head of Egypt's Tourist Guides Union, agreed with Mahmoud that the pyramids area has been in chaos for the past five years, which destroyed its reputation. Halaqa attributed this chaos to factors such as the inability of tourist police to protect foreign visitors against what he described as harassment from street vendors. He also blamed the administrative apparatus in Giza along with the Ministry of Environment for failing to keep the area clean.

He said successive governments in Egypt failed for over 50 years to protect and optimally use Egyptian antiquities. The private company, however, will succeed because of the strict administration standards and competitiveness in the private sector. According to Halaqa, government employees don’t care about tourist attractions; all they care about are their salaries.

Halaqa considers the move to a private company the first step toward achieving real growth in tourism. He said he is confident that the condition of the tourist attractions under private companies will improve significantly.

Magdy Selim, former undersecretary of the Tourism Ministry, believes that assigning the management of tourist attractions to a private company will not only achieve material gains, but will also help save Egypt’s tourism reputation by marketing abroad and providing better service for tourists. Selim asserted that more than 75% of Egypt’s tourist attractions need a miracle to save their reputation and increase revenues.

In early August, President Abdul Fattah al-Sisi restructured a tourism council under his chairmanship. The council will develop policies for promoting tourism and suggest necessary legislation and regulations to improve tourist activities. Despite the stagnation of Egypt’s tourism industry, the council has not met since it was formed.

Selim said the government is long overdue in promoting tourism, which has languished for five years. He said laws that regulate the government’s management of tourist attractions — especially laws related to funding — impede development. Private companies, he said, have more freedom to allocate funds for assets, services and promotional events, both inside and outside Egypt.

Selim is optimistic that contracting out tourism management to the private sector will pave the way for a variety of local and international companies to invest in tourism in Egypt. However, he believes the Egyptian administration should offer tax breaks and other incentives.