Speculation about a possible deal between Turkey and the Syrian government has intensified after Syrian fighter jets bombed Kurdish targets in Hasakah. 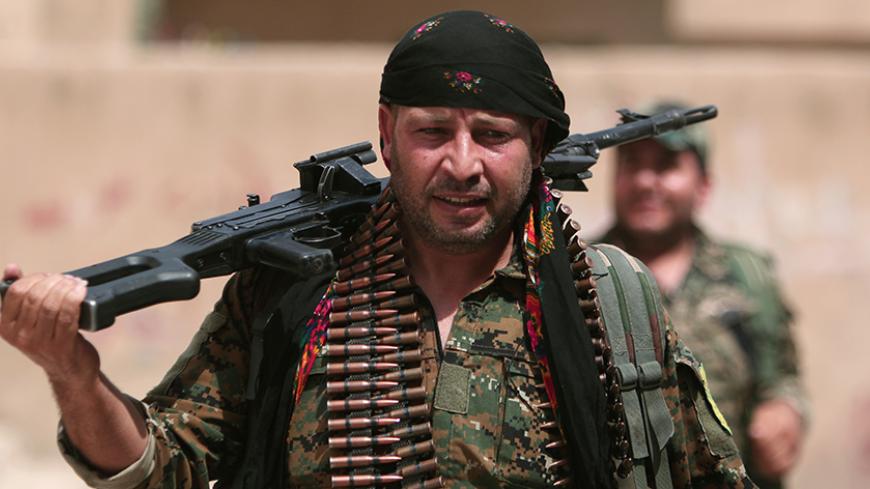 A Kurdish fighter from the People's Protection Units carries his weapons as he walks along a street in the northeastern city of Hasakah, Syria, Aug. 21, 2016. - REUTERS/Rodi Said

Syria's multisided conflict — pitting rebels against government forces and the US-led coalition against the Islamic State (IS) — took a further twist Aug. 17 when Syrian air force jets began pounding the Kurdish-controlled city of Hasakah in northeastern Syria, targeting the US-backed Kurdish militia known as the People's Protection Units (YPG). At least 43 people, including 27 civilians, were reported to have died in the strikes that prompted thousands of Kurds to flee the city as Kurdish fighters and pro-government forces clashed on the ground. The clashes were continuing as of Aug. 22.

A YPG official contacted by Al-Monitor said the fighting was continuing and that it would not stop until “the regime is gone from Hasakah.”

While the government and the Kurds have had minor turf battles in the past, the airstrikes mark the first time that Syrian forces have ever targeted the Kurds from the skies.

The move may presage a dramatic shift in the course of the war that could severely test the US-Kurdish alliance, trigger violence between Arabs and Kurds, provoke direct Turkish intervention and eventually undermine the Kurds' giddying gains.

The Kurds and the government had largely left each other alone since the start of Syria's civil war. The arrangement suited both sides. The Kurds set about realizing their long-denied dreams for self-rule for the first time, and government forces were freed up to fight opposition rebels elsewhere in the country. Allowing the Kurds to set up their own autonomous region along Turkey's border was also Syrian President Bashar al-Assad's way of getting back at Ankara for backing opposition rebels seeking his removal.

The apparent collapse in the nonaggression pact between the YPG and the government is tied to several factors. Foremost among them is Turkey's attempts to recalibrate its Syria policy, an outcome that Assad's backing of the Kurds was in part calculated to achieve.

Turkey's policy has clearly been a disaster. It triggered a costly row with Russia, strained ties with Iran, pushed Washington into the arms of the YPG, and allowed IS and other jihadi groups to organize inside Turkey. Turkish Deputy Prime Minister Numan Kurtulmus admitted last week that "everything [bad] that befell us is because of the Syria policy."

The deadly Aug. 20 suicide bombing of a Kurdish wedding party in the Turkish border town of Gaziantep was the latest in a string of IS attacks against Turkey.

Turkey has been hinting for some time that it's ready to change tack amid thinly veiled suggestions that Ahmet Davutoglu, the freshly ditched prime minister and architect of Turkey's neo-Ottomanist foreign policy, was to blame for it all.

Speculation about a possible thaw between Ankara and Damascus intensified over the weekend when Turkish Prime Minister Binali Yildirim dropped fresh hints that Turkey would no longer be pushing for Assad's ouster. Yildirim told reporters that the Syrian president could remain in power for the "interim," though "not for the long term." Yildirim added, "It is clear that the [Assad] regime has understood the structure the Kurds are trying to form in the north [of Syria] has started to become a threat for Syria too."

This is nothing new. Much like Turkey, Iran and Iraq, which also have large and restive Kurdish populations, Syria has brutally suppressed its 2.5 million-plus Kurds for fear they would seek to break away. The solution of Assad's predecessor and father, Hafez al-Assad, was to export the threat of Kurdish separatism to Turkey, allowing the Kurdistan Workers Party (PKK) and its leader, Abdullah Ocalan, to run their 29-year-old insurgency in Turkey from Syrian soil.

That was until Turkey threatened in 1998 to go to war against Syria if it didn't end its support for the PKK. Ocalan was duly kicked out and captured by Turkish special forces in Kenya the following year. Turkey and Syria swiftly carried their budding friendship to a "strategic partnership" while the PKK set about planting the seeds of the YPG.

Though they are on opposite sides again, Ankara and Damascus now see a common Kurdish threat. Kurdish separatism is one area where the government and the opposition agree as well. Both denounced as illegal the so-called Northern Syrian Federation that was declared by the Syrian Kurdish administration in March. As one high-profile Twitter account going by the user name of @EHSAN12 put it in an Aug. 22 tweet, "The entire spectrum of [Syrian] opposition from its most secular to its most ardent Islamists share goal of a United Syria. Kurds face this fact."

Backed by US air power, the YPG presently controls an area stretching from the Iraqi border all the way to the IS-held town of Manbij, which the YPG-led Syrian Democratic Forces captured earlier this month. This may have been a tipping point — and not just in the battle against IS.

Turkey has long railed against US cooperation with the YPG, asserting that helping the YPG is the same as helping the PKK. Calls for Washington to shelve the alliance are growing louder as the PKK escalates its violent campaign inside Turkey, killing hundreds of security personnel. Many civilians have died in the PKK attacks.

Washington refuses to bow to Turkish pressure on the grounds that unlike the PKK, the YPG is not on the State Department's list of terrorist organizations. US officials maintain the fiction that the two groups are separate simply because the YPG remains the most effective fighting force against IS in Syria. Turkey’s rebel proteges, including assorted Free Syrian Army affiliates and the jihadi Ahrar al-Sham, have repeatedly failed to eject IS from the stretch of territory it controls along the Turkish border despite massive air support from the coalition.

Still mindful of Turkey's anger, Washington promised Ankara that once Manbij was taken, the YPG would withdraw east of the Euphrates River. Let alone leave Manbij, the YPG is advancing father west toward the IS-held town of al-Bab.

The YPG's overarching goal is to punch its way through to the Kurdish-administered enclave of Afrin, thus creating an uninterrupted stretch of Kurdish-controlled territory. Turkey has declared this a "red line," but it's fading fast. A YPG commander told Al-Monitor in an email message there remained roughly 50 kilometers (31 miles) between the YPG's forward positions west of Manbij and the town of Tel Rifaat near Afrin. "We are on the verge of linking the [Kurdish-run] cantons," he wrote.

Anti-US feelings in Turkey are growing and spiked in the wake of the July 15 coup attempt, which most Turks believe was orchestrated by unnamed "circles" in Washington and carried out by officers loyal to Fethullah Gulen, the Sunni Muslim cleric who lives in self-imposed exile in Pennsylvania.

Washington's reluctance to extradite Gulen without firm evidence of his complicity in the coup has deepened Turkey's suspicions. It may have also accelerated Turkey's efforts to mend ties with Moscow and Tehran and possibly even Damascus.

Western diplomats speaking on condition of strict anonymity told Al-Monitor that it remains unclear whether Turkey is ready to resume relations with Damascus, but that they do not rule out the possibility. The contours of any deal would need to see Ankara curbing its support for the opposition rebels and especially for jihadi groups such as Jabhat al-Nusra. In exchange, Assad's forces would clamp down on the Syrian Kurds.

With Syria's future as yet unresolved, why would Turkey pull the plug on the rebels? They remain Turkey's biggest lever over Syria and against the YPG. It is more likely that Ankara will wait for the outcome of the US presidential elections and gauge the new administration's Syria policy before making any drastic changes to its own. Besides, why risk alienating its top ally, Qatar, and regional heavyweight Saudi Arabia, which support the rebels as well?

Many would say it is because Turkey would rather live with Assad than allow the establishment of an autonomous Kurdistan on its borders that would effectively be run by the PKK.

Washington’s muted response to the government’s assault must have unnerved the Kurds. Coalition aircraft were scrambled over Hasakah, but it was to protect US special forces on the ground, not the Kurds, Western security sources said. If US forces were hurt, Washington would likely either have to increase its military presence and declare a no-fly zone or reduce its presence on the ground to a minimum, dealing a further blow to the Syrian Kurds.

All of this is playing straight into Russia’s hands. Driving a wedge between the Kurds and the United States and between the United States and Turkey gives Moscow greater latitude to shape events in Syria. But ultimately the Russians — who are paying an increasingly heavy price for their involvement — are eager to see the conflict end. A deal between Damascus and Ankara would accelerate this.