Why weakened post-coup Turkey may drift from the West

Since the failed coup, it seems Turkey has developed an elaborate conspiracy theory blaming a triumvirate of Kurds, Gulenists and the "Supreme Mind" — the United States. 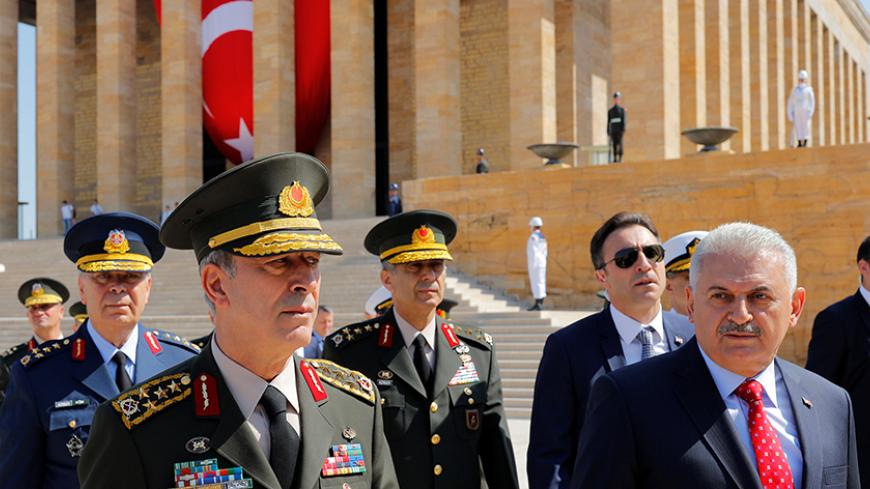 One month after the failed coup, Turkey’s east and southeast are being rocked by Kurdistan Workers Party (PKK) violence. A provincial center in the east, Elazig, witnessed a dramatic car bombing Aug. 18 that took the lives of three police officers and wounded 217 people. The PKK claimed responsibility.

Prime Minister Binali Yildirim and Chief of Staff Gen. Hulusi Akar rushed to the scene. That attack came just hours after a car bomb that targeted the police headquarters shook the eastern city of Van. While Yildirim was expressing the government's determination to fight terror and violence, the PKK ambushed a military convoy near the provincial center of Bitlis, which lies between Elazig and Van.

There had been an apparent lull in the PKK’s activity in the immediate aftermath of the July 15 failed coup. That lull apparently prompted the government to make a premature, misguided and somewhat optimistic assessment of the situation.

The main focus of the Kurds — above all, the PKK — had been the ongoing battle in Manbij, and the PKK apparently was emboldened by its military success following a 2½-month campaign to remove the Islamic State (IS) from that strategically important town in northern Syria. Now it seems the Kurdish insurgent organization is exploiting the Turkish government's weakened state.

The Turkish air force and its second army have been key in dealing with the PKK insurgency, but they are the military segments most affected by the purges.

The commander of the second army, four-star Gen. Adem Huduti, is the highest-ranking officer in jail for allegedly taking part in the coup attempt. Seven air force base commanders and 213 pilots — including 150 combat pilots who fly F-16s or F-4s — were expelled from service. More than 7,000 police and intelligence officials were purged.

Chatham House associate fellow Fadi Hakura predicted soon after the coup, “In all probability, the government’s replacement of key staff with less-qualified loyalists will rupture the institutional integrity and professionalism of the military establishment and the state institutions.”

There were already assessments by Turkey’s NATO partners that the purges could damage its ability to thwart the threat from IS and other militant groups. It seems the PKK was just the first to take advantage of Turkey's post-coup security vacuum.

Only hours after this column was originally written, Gaziantep was struck Aug. 20 by a suicide bomber. Gaziantep is the most-populated city in the southeast and a hub for Syrian refugees and the opposition. The target was an outdoor wedding in the streets of a predominantly Kurdish neighborhood attended by pro-Kurdish People's Democratic Party supporters. The casualty count stood Aug. 23 at 54 dead and some 90 wounded. Authorities said many of those killed were children. President Recep Tayyip Erdogan initially blamed IS, but officials later said they had not determined the perpetrators.

Since the coup attempt, Erdogan has been trying to convince everybody inside and outside of Turkey that “the headquarters of evil” is in Pennsylvania, home to self-exiled Turkish cleric Fethullah Gulen, who Erdogan says was the mastermind of the failed coup. Erdogan links the escalation of PKK violence to Gulen.

That reasoning even extends all the way to the Syrian Kurdish nationalist Democratic Union Party (PYD) — a de facto ally of Washington on the ground in Syria against IS. This thinking alleges a tripartite alignment among the Gulen movement, the PKK and the PYD.

Speaking to the daily Hurriyet, Yildirim claimed that the trio had been in contact before the coup and afterward met somewhere in northern Iraq, implying in the territory of the Kurdistan Regional Government.

“Everything is clear. All the connections relating to the treachery are being deciphered,” he said.

Yildirim attributes his conviction to intelligence reports. However, the accuracy of such reports is far from being ascertained. Yildirim earlier had accused the PKK of conspiring to finish the job the Gulenists failed to accomplish July 15.

Employing a favorite notion entertained by certain Islamist and pro-Justice and Development Party (AKP) pseudo-intellectuals — and also used by Erdogan himself — Yildirim has said the Gulenists and the PKK are guided by the “Supreme Mind.” That Supreme Mind connotes the United States and is used when one doesn't want to emphasize the word “America” openly.

For Yildirim, that Supreme Mind is a puppeteer, playing the Gulenists with its right hand and the PKK with its left. Thus, both can be considered the instruments of an external force.

The prime minister elaborated on the conspiracy theory to a Hurriyet reporter:

The Hurriyet reporter deduces from what he heard from the prime minister that Turkey is preparing for a “very serious diplomatic offensive” that would affect the regional balance of power.

It is no secret that Turkey, to check the Kurds from gaining ground in Syria and as a result of its discontent with the American position in Syria, is trying to coordinate its regional policy with Russia and Iran.

It is indeed a very dramatic policy shift with very important geopolitical implications. One indicator of the shift came Saturday in Yildirim's remarks during a meeting with the international press where he said that, while Syrian President Bashar al-Assad has no place in Syria’s future, “he can remain in office during the period of transition.”

Such a statement is a radical departure from Turkey’s Syria policy of the past five years, as Assad's immediate removal had been non-negotiable. The change can be considered a necessary step toward accommodating Russia's Syrian policy.

Let's go back to the issue of the PKK’s escalation during the failed coup's subsequent security vacuum and ask:

The official assessment is quite popular among AKP loyalists. The pro-government media supports it in general. It is consistent with the prevailing mood of subscribing to conspiracy theories. Yet it has not provided, at least until now, any credible evidence to demonstrate links between the PKK and its former archenemy the Gulenists.

On the second question, almost no one — perhaps including Turkish policymakers themselves — believes confronting the West and replacing it with close relations with Moscow and Tehran could provide the security and stability Turkey needs in the aftermath of the botched coup.