After Mahmoud Ahmadinejad wrote a letter to Barack Obama asking for the return of $2 billion, Hassan Rouhani asked the judiciary to investigate why the funds belonging to Iran were never pulled out of the United States. 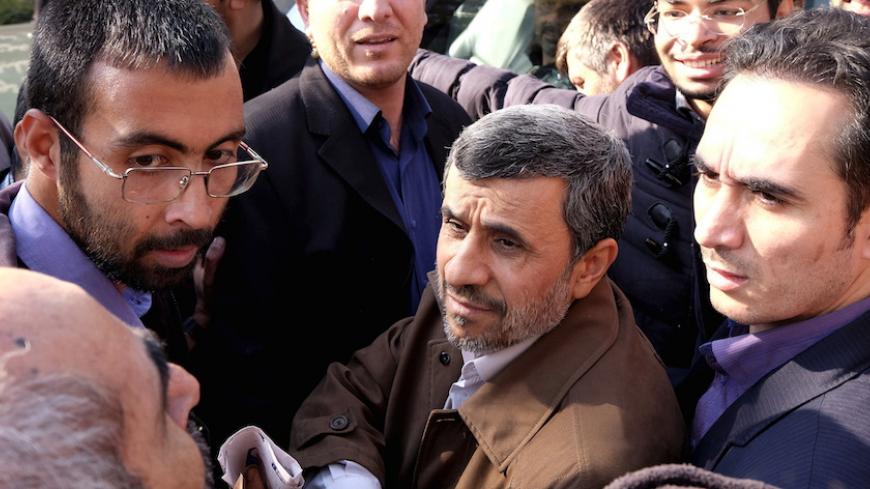 Former Iranian President Mahmoud Ahmadinejad (C front) listens to his supporters during the funeral ceremony of Iranian Ambassador Ghazanfar Roknabadi, who was killed in Saudi Arabia in a stampede at the hajj pilgrimage, after Friday prayers in Tehran, Nov. 27, 2015. - REUTERS/Raheb Homavandi
Arash Karami
@@thekarami
August 11, 2016

Former President Mahmoud Ahmadinejad’s personal letter to US President Barack Obama asking the American president to return $2 billion in Iranian funds blocked in the United States could become a legal headache for the former president, who some believe is eyeing a political comeback.

The Central Bank of Iran under Ahmadinejad’s presidency purchased the $2 billion of US bonds at a time when the country was facing off against the West over its nuclear program. The money was later confiscated and awarded to victims of terrorism by a US court, a decision that was upheld by the US Supreme Court in April.

According to current members of Hassan Rouhani's administration, it was becoming increasingly clear Iran would soon face international sanctions over its nuclear program, and many experts advised against the move to invest in the funds. Now, just as Ahmadinejad may want the money retrieved in order to eliminate a potential political attack from his opponents should he or one of his allies run for president in May 2017, it seems some Iranian political figures will use this issue to keep the former president far away from political office.

During a Cabinet meeting Aug. 10, President Rouhani said that before the funds were confiscated in 2009 “there was a golden opportunity at our discretion to remove all of our money from American access, but it was neglected.” Rouhani, without mentioning Ahmadinejad’s name, said that the judiciary and Supreme National Security Council should investigate the matter.

Saeed Laylaz, an outspoken economist, also spoke about the blocked money and Ahmadinejad’s role. He said that America’s confiscation of the money, and awarding it to terror victims, was an “unprecedented act.” Laylaz said that had America confiscated US bonds belonging to any other country, it would have undermined America’s credit. However, he said since there has been a “global consensus” against Iran since Ahmadinejad’s presidency, such acts have no effect on America’s credit.

Laylaz said that the people responsible for allowing the United States to confiscate the funds must be dealt with “in the worst possible way, whether it is Ahmadinejad or Rouhani.” He echoed Rouhani’s comments that there was a 10-month opportunity to pull the money out and even suggested it was “intentional” to not pull out the money. He added, “This act was more treacherous than any betrayal.”

While there was indeed a “national consensus” against Iran under Ahmadinejad, the current administration feels that there have been positive results from the nuclear deal. Foreign Minister Mohammad Javad Zarif told reporters that while the US House might pass a bill against Iran, it would not pass the Senate today. Zarif also said that had there been no nuclear deal between Iran and the six world powers, Iran’s oil exports today would be 294,000 barrels a day.

However, Zarif conceded that problems remain and will likely remain between Iran and the United States. “The Americans by nature are bad toward us,” Zarif said. “In the last 37 years, enmity and hostility between Iran and America has been proven.”