Where does tribal influence fit in Iraqi politics?

Even high-level Iraqi politicians are turning to their tribes for support in resolving political disputes, a traditional resource that finds itself at odds with democratic state-building. 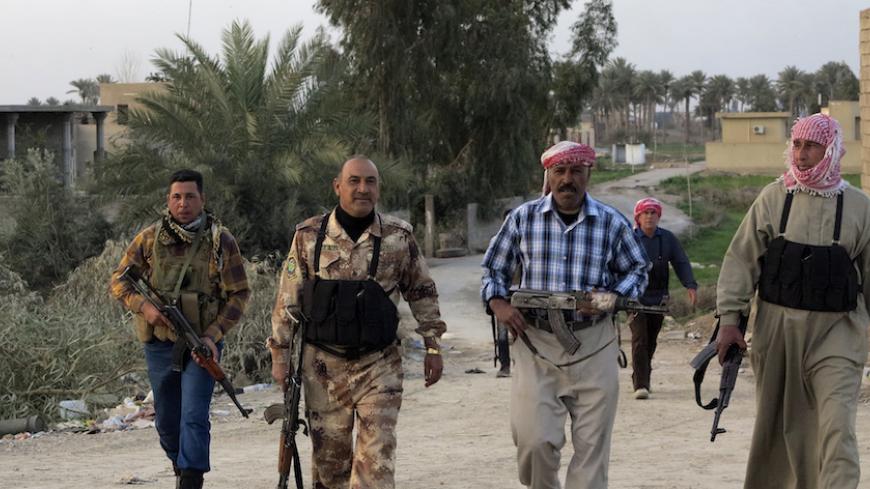 BAGHDAD — Iraqi parliament Speaker Salim al-Jabouri issued a warning against involving the tribes in political disputes Aug. 14. His warning came a few days after the tribes affiliated with Defense Minister Khaled al-Obeidi and parliament member Mohammed al-Karbouli interfered in a political dispute as the two exchanged accusations of corruption during the Aug. 1 parliamentary session.

Jabouri seemed greatly concerned about the involvement of Iraq's tribes in political conflicts. During a visit by a tribal delegation to the parliament, he told a number of Iraqi tribal leaders, "Preserving the independence of the tribes in Iraq is an important and essential safeguard. The ongoing attempts to drag the tribes into side conflicts are designed to undermine the building of Iraqi society and the Iraqi state.”

Iraq's tribes are social institutions that have preserved many customs and traditions that run contrary to the laws of the state. The tribes manage their issues, even serious crimes such as murder, under a "blood money" system. A majority of Iraqi politicians seek to please them, as they represent large numbers of voters in local and parliamentary elections.

Athir al-Jassour, a political science professor at Mustansiriya University in Baghdad, told Al-Monitor, “Since the Iraqi state was founded, there have been problems regarding the division of power, and customs and traditions have defined many of these problems, in determining both political and social approaches to them.” He added, “Among the various conflicts within Iraqi society, power was divided between religion, tribes and the rule of law, and the balance of power is tipped in favor of the one who can influence and protect.”

Iraqi politicians' complex relationships with their tribes must be managed with a law regulating tribal affairs. The adoption of this law is an attempt by the Iraqi parliament to control growing tribal strength.

Jabouri and other politicians fear tribal involvement in political conflicts, as the tribes' power threatens to undermine the authority of the state. The majority of the tribes are armed, and some even possess heavy weapons, which means that the outbreak of any tribal fighting could lead to divides no less dangerous than sectarian ones. Because of these tribal institutions' complex relationships with each other, their involvement in politically motivated fighting may drag other tribes into armed conflict.

Obeidi and Karbouli's is not the first political dispute to reach the tribal councils. What makes this time different and more dangerous is that the tribes have offered their absolute support to their affiliated politicians against other politicians. The defense minister made his appreciation clear by posting a video clip of his tribe meeting on YouTube.

The tribe of Karbouli, who has been accused by the defense minister of using blackmail in his efforts to make deals, did not take long to reply to the Obeidi tribe’s escalation. The elders of Karbouli’s tribe held a press conference to deny the charges made by Obeidi against their “son” Karbouli and announce that they would stand firmly against anyone who dares to attack one of their members.

Iraqi writer and journalist Omar al-Shaher, known for his analysis of the affairs of the Sunni-dominated Iraqi provinces, explained to Al-Monitor why politicians, particularly from the Sunni community, turn to their tribes for support.

He said, “There is no longer a major Sunni political bloc able to provide protection to Sunni politicians. After the disintegration of the Iraqi National Forces Alliance, the largest Sunni alliance in parliament — to which Obeidi and Karbouli are affiliated — and the grinding conflicts between the alliance’s components, a politician can only find shelter in his tribe.”

He added, “The Sunni politicians who know that they have influence on the street must have an alternative to the political alliances that [once] ensured their survival in office. The tribes emerged as an alternative.”

He downplayed the tribes' potential influence, saying, “I do not think that tribes will have an important or permanent [political] role. There are no large and cohesive tribes that have entered the political scene. Rather, there are only small tribes whose roles are temporary.”

While Shaher was optimistic about the future of the tribes in the political process, Jassour was less so, stating, “The tribe’s direct intervention in political affairs strengthens its role and promotes the sense of belonging to this tribe by its members and those who believe in its power, enabling it to become a strong alternative to the authority of the national law.”

Jassour expressed concern that tribal authorities may aspire to a major role in various political events such as elections. He said rule of law is being undermined as a result of interference by multiple authorities, including tribes.

He also said he fears the tribes would support corrupt politicians from among their members. He said, “This means that no matter how corrupt a politician is, he will find those who defend him and protect his corruption, which would encourage him to become even more corrupt and to disregard any opposition.”

Indeed, many of the tribal authorities' customs are inconsistent with democratic laws, and one may say that tribes do not believe in laws at all, since they do not rely on them but rather their own customs to manage the affairs of their members.

Resorting to tribes to resolve political differences undermines the law, and prompts Iraqi citizens to withdraw into tribalism. Why would the citizens respect the rule of law while two of the top politicians in the executive and legislative branches are solving their disputes among their tribes?