Israeli political parties are losing substance and relevance while direct connections and communication between politicians and the public are growing stronger and more meaningful. 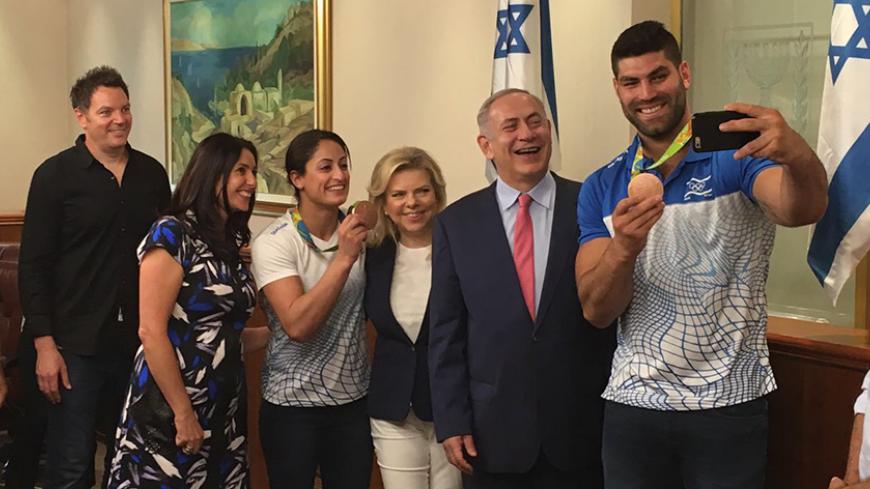 Prime Minister Benjamin Netanyahu and his wife, Sara, pose for a selfie with Olympic bronze medalists Yarden Gerbi and Ori Sasson and Sports and Culture Minister Miri Regev in a picture that appeared on the prime minister's Facebook account, Jerusalem, Aug. 17, 2016. - Facebook/IsraeliPM

“I’d like to share with you,” began the prime minister, who also serves as communications minister, “what seems to be a new phenomenon among some groups in the media. They are censoring criticism of them in the responses that are posted to their sites.” Netanyahu explained that the editorial board of Channel 2’s Friday night show "Ulpan Shishi" had cut part of his response to a critical report about the alleged growing involvement of his son Yair and his wife Sara in managing affairs of the state.

After the last election in March 2015, Netanyahu adopted a new practice. He now speaks directly to the people, without any mediators and without journalists, but also without a party. In effect, he is the Likud, and the Likud is him.

But Netanyahu’s electoral victory was the product of much more than his own effective internet campaign. His achievement reflects a deep-seated change taking place in Israeli politics as a result of the social network revolution. It is a process that has kept many experts busy working to understand where it is all leading. Four of them spoke with Al-Monitor in an effort to answer that question. Karine Nahon is a researcher of the politics of information and social networks, Asher Idan is a philosopher and authority on social networks and futurism, Alex Rosenfarb is a manager of digital media and political campaigns, and Arad Akikous is a political strategist and researcher of social networks.

All agree on one point: Israel’s system of representative parliamentary democracy is becoming increasingly irrelevant. It is in the process of being replaced by direct, personal politics, while at the same time, the traditional party structure is losing power.

"The most prominent trend is the way that politicians are funded. It has already begun in Israel and will only grow stronger,” said Rosenfarb. “The saying ‘follow the money’ is very true in this case.” According to him, “[President Barack] Obama’s model of a mechanism based on small donations, which has since been adopted in Israel by politicians like [Labor Knesset members] Shelly Yachimovich and Stav Shafir, will continue to catch on and impact the political structure. That is because when there are many small donors, politicians naturally grant importance to their opinions. What happens, in effect, is that bargaining power is transferred to the masses.” He added, “We are in the midst of a transition from a distant representative democracy to a form of democracy in which more and more citizens are involved in the various political processes."

As for how this process will impact the parties, Rosenfarb said, “Everything we knew about mass party registration will disappear. We will move from the model of democratic elections with people going to vote every four years to a model in which the citizen is involved in politics on a daily basis through the internet.”

“Here in Israel," he continued, "‘coalition discipline’ is the best excuse that politicians have to explain why they acted in ways that violate their previous commitments to their voters. The excuse will grow weaker, since the entire party structure is about to change. We will start seeing more independent representatives within the parties. We’ll have 120 superstars in the Knesset, while the difference between right and left will be blurred.”

Idan is convinced that the internet revolution will change the face of politics forever. “Overall, what happens is that on social networks, everybody speaks to everybody. This is the first time since the State of Israel was established that everyone can speak to everyone without mediators and without any financial investment. The result of this is a boost in activism and an increase in various expressions of polarization. Suddenly, people can meet other people who are similar to them.”

Idan notes that in the last elections, the discrepancies between the polls, which predicted a Likud loss or at best a tight victory, and the actual results were the result of much more than errors in statistical sampling. “It is evidence that things are changing. While we are having a hard time understanding what the political map looks like, in general, we are in the midst of the slow process of the dismantling of parliamentary democracy. People no longer believe in the parties. We are transitioning to a model of direct democracy, just like in [ancient] Greece. In my assessment, the internet will start producing politicians out of nowhere at some point in the future.”

Akikous agrees with Idan that it is very hard to tell how long the entire process will take. “We are in a transition period, a midpoint in the process by which society goes back to being tribal, because decentralization is the very nature of the internet. On a practical level, we are seeing how Facebook sets the discourse and polarizes it. The good is now very good, and the bad is now very bad. Politicians enter into this and adapt themselves accordingly. Politicians believe that they control the discourse, but the fact is that they are being controlled.”

Akikous was involved with the social justice protests in the summer of 2011 that emerged from the internet into a show of force on the streets. He uses an example from that experience to explain how the masses influence politicians: “We were sitting at the headquarters during the height of the protests, watching a press conference on TV in which Netanyahu made an offer to the students. We followed the online discussion in real time and saw that the response was extremely negative, over 90% negative, so we rejected his proposal.” Could the internet give birth to a prime minister some day? “I’m convinced it will,” said Akikous, “but I can’t tell you when it will happen.”

Nahon said, “The parties have completely fallen apart. They still exist because of the system through which they receive official funding from the state, but between election campaigns, there is no activity in the local branch offices. We are witnessing a process in which politics is becoming completely individualized, and the phenomenon will only get more extreme over time. In the 2013 election, we still saw active party websites alongside the party chairman’s website, but in the last election, everything flowed straight toward the party leaders’ website. Netanyahu, [Yair] Lapid and [Naftali] Bennett were the faces of their respective parties.”

Nevertheless, Nahon says it's not time yet to eulogize the old ways of politics and the primary system. People are in no hurry to give up their power, she explained, so the process will take time. The big change that the internet has already brought about stems from its ability to empower fringe elements or groups far removed from the centers of power. One example of a marginalized group that is gaining prominence is Mizrahi women, she said.

Yet despite transparency and other positive changes that the internet has forced on politics, Nahon claims that the internet is far from the decentralized and democratic platform some dreamed it would become. “The internet is very unbalanced and undemocratic. After all, the search engine Google dominates 99% of the web in Israel. They are players, even though you don’t realize that they are playing with you and influencing the way you think.”