Why some Egyptians yearn for return to monarchy

Nostalgia for the period of King Farouk's monarchy has Egyptian youth focusing on that period's positives, without addressing its mistakes. 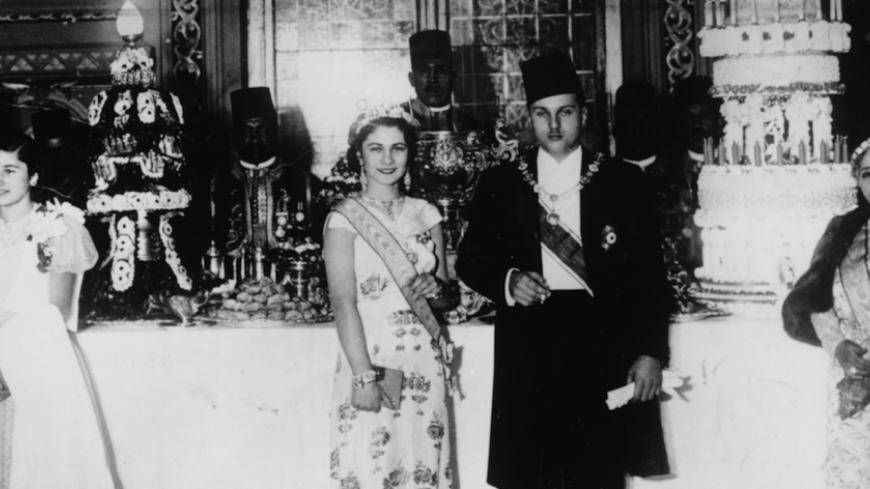 King Farouk and Queen Farida of Egypt at an event, circa 1940. - Keystone/Hulton Archive/Getty Images

The newfound nostalgia among Egyptians for the monarchical period did not emerge in a vacuum. Among the most important principles of the revolution of July 23, 1952, were the elimination of capitalism and monopolies, bringing about social justice and putting in place a functioning democratic regime to confront political distortion. Yet on the 64th anniversary of that revolution, these have yet to be achieved.

In the shadow of the political polarization that followed the January 25 Revolution in 2011 and the government’s failure to manage the country politically and economically, Egyptians suffer from a bout of nostalgia that is driving some of them to say, “May God have mercy on [the king]; If only another [like you] would come!”

Facebook has become a platform both for young Egyptians who support a return to the monarchical period and for those who oppose it. The official Facebook page of King Farouk is always posting bright, attractive images of Egypt during the period of the monarchy and contrasting them with the chaos and caprice that afflicts Cairo today.

Egyptians consider the July 1952 revolution a watershed moment in their modern history, one which helped to rid them of monarchical rule. Nevertheless, current repression by the security forces has caused many to reconsider the words attributed to King Farouk when he was leaving Egypt (“One drop of Egyptian blood is more precious to me than all the thrones of this world.”) and compare them with what happened after the January 25 Revolution and the killing of protesters that followed.

Hamdi Abd al-Tawwab, an Egyptian journalist, told Al-Monitor, “Most of the information [presented by] the monarchy’s defenders is partial, especially when you consider that the period when King Farouk ascended the throne was one of the worst periods in Egyptian history in nearly every respect. The evidence shows that that period witnessed the spread of illiteracy, ignorance and poverty. The Wafd Party arose as part of the Million Shoes campaign of 1948 to aid the poor.”

He added, “Those who defend the monarchical period are under the sway of lies, like [the streets of] Cairo and other cities were clean. They forget that [urbanization] was limited to only 2% of the population, mostly the king and his entourage.”

Muhammad Ghanim, a high school teacher, told Al-Monitor, “King Farouk was close to the clerics and the [Quranic] reciters, such as Sheikh Mustafa Ismail, and the [so-called] ‘prince of poets’ Ahmad Shawqi, while the clerics today cannot find anyone to provide for them.”

He said, “The reality that our people are living through right now only confirms that the experiment in republican rule has failed. Egypt has been transformed from a creditor nation into an international debtor. Egypt’s debts had reached nearly 300 billion [Egyptian pounds] by 1969, and Egypt was forced to resort to American food aid, after having been a major cotton exporter. Moreover, the local currency declined.”

Muhammad Ibrahim, a university student, told Al-Monitor, “On July 23, the terms ‘Basha’ moved from being used for landed gentry to a title for officers, namely those who rebelled against King Farouk’s corruption to govern the country themselves. They spread even more corruption, killed the young people and looted the country’s riches.”

In his view, the officers became the July 1952 revolution’s greatest beneficiaries. They succeeded in forming an empire for themselves, taking over vast swathes of land through their influence within the army.

Ibrahim added, “The two states of Sudan and South Sudan both belonged to Egypt, and the king refused to give them up to the influence of the Sidky-Bevin agreement of 1936, which enabled the evacuation of English occupation forces from Egypt. England refused to evacuate the Sudan, however. Contrast that with today, and the government is giving up the two islands of Tiran and Sanafir to Saudi Arabia.”

Zaydan Yahi, an engineer, told Al-Monitor, “Egypt enjoyed tremendous status within the international community. That much you can tell from the pictures showing King Farouk visiting the prime minister of Iran in 1938, where the latter took the king’s hand, and from Cairo’s manufacture of the Kiswah [that once] draped the Kaaba, dispatching it to Mecca in a convoy known as ‘Al-Mahmil,’ which also bore Egyptian pilgrims.” He added, “Now, Egyptians are insulted and humiliated abroad. Now, we [beg for] rugs from the United Arab Emirates and financial aid from Saudi Arabia.”

Yahi said, “King Farouk launched social projects like the founding of the Council to Combat Poverty, Ignorance and Sickness in 1946, as well as a project to house the poor and another to provide free primary and secondary education.

“King Farouk closed the al-Sukri gold mine in 1948 so that it would become a source of wealth for future generations. He loved Egypt and thought of its interest even after he left the country. Today we exhaust our natural resources, and plants close because of the lack of raw materials and workers are threatened with arbitrary dismissal and displacement.”

Yahi stressed that the unemployment rate in Farouk’s era was only 2%, while today it has reached 12.7%. Then, $1 was equal to around 25 Egyptian piasters, while today $1 is worth more than 12 Egyptian pounds on the black market. In the monarchical period, Egypt lent Britain the equivalent of $29 billion in today’s dollars, whereas, in the present era, Egypt must negotiate with the International Monetary Fund to obtain a loan of $12 billion, in addition to aid from the Gulf.

He told Al-Monitor that, at the cultural level, Cairo was a center of art. Giants in the world of music, poetry and literature resided there during the monarchical era, while today we’ve got what they call “the singers of the slums.”

Mohamed Nabil, a journalist, said in a Facebook post, “Those defending the monarchy’s rule aren’t looking at the social variables and the sheer scale of beneficiaries from the July revolution, chiefly from the lower social class. As for those who attack the Republican regime, who mock [Gamal Abdel Nasser] because of the wave of security repression and the lies of the democracy present today, they imagine that the July revolution brought Abdel Fattah al-Sisi to power … [but] it was the officers who gave women the right to vote.”

Qadri Hafny, a professor of political psychology, told Al-Monitor, “The suffering that Egypt is going through at present is driving the youth to take out their wrath on the period of the Republican regime and yearn for a return to the period of the monarchy. But they are only focusing on that period's positives, without addressing its mistakes.”

He added, “Absolute support for any period will lead to reverence for, and sanctification of, human historical figures. Thereafter, it’s a slippery slope to justifying [their] errors, because [people] begin to have it fixed in their mind that those mistakes were unavoidable, [or that] major achievements could not have been attained without them. From there it’s a short road to repeating those same mistakes, if they are accompanied by [similar] achievements. That’s what’s taking place now with the youth who are defending Nasser or opposing the Republican regime.”