As the Pokemon Go game becomes a global phenomenon, the Turks question whether the game can be banned before becoming available in the country. 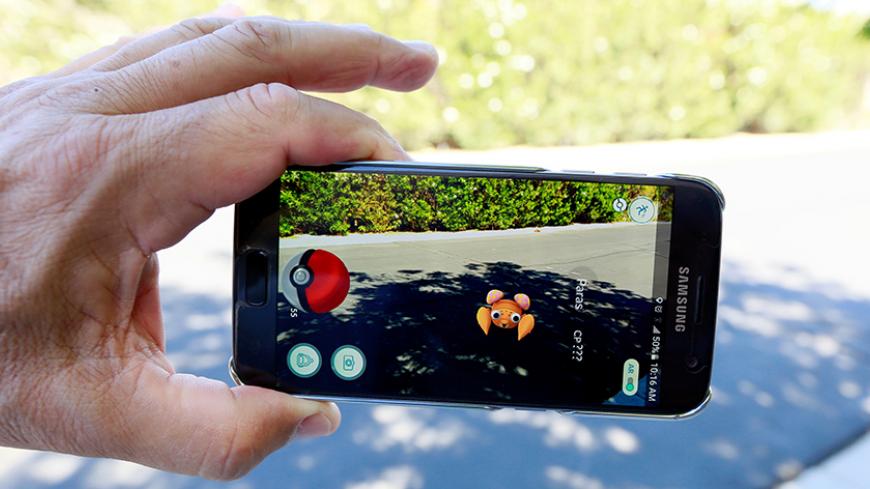 Following the release July 6 of Pokemon Go in the United States, New Zealand and Australia, Pokemon can now be found also on the streets in Turkey. The new game was an instant hit everywhere; even in countries such as Turkey, where the game is not yet officially released, tens of thousands of gamers have downloaded it on their mobile devices. Pokemon Go is an augmented reality game that utilizes the GPS and camera of an Android and iOS device; players get to see their cities like never before.

Foreign trade specialist Serkan Hizli told Al-Monitor that most players in Turkey downloaded the game after its release by changing their phones’ location to New Zealand. With the local maps downloaded on their phones, gamers go outside and travel between the real and virtual worlds. Pokemon Go gets gamers out of their homes, where they normally spend hours playing games, to search and catch Pokemon characters all around town; they play while walking, cycling or driving their cars.

In fact, Pokemon Go commercials advocate “catching them all” while on the go. The game conveniently comes to the player, who could be jogging in the woods, hiking by the lake, not missing out on life.

In regard to the way the Pokemon Go craze has come to Turkey, Hizli said, “Most players in Turkey are gamers who regularly spend a good deal of time on different social media outlets. Most of them are fairly well educated. The game is in English; however, one can manage with little knowledge of English. You can trade Pokemon, get them to evolve or even buy pokecoins with a credit card from the shop.”

Within a week of its release, the popular public information-sharing network Eksisozluk has more than 340 pages of entries on the game, and dozens of entries were written about the reactions of the public to the game. There were also publications of Pokemon Go guides in Turkish explaining where to visit for the best sightings of rare characters, and how to catch them and make progress in the game. Instructions were published on Twitter with links for different types of cellphones and how to download the game. Passionate players created YouTube videos explaining how to download the game in Turkish; one such video had almost 400,000 hits in the first week of its release.

In a short time, Twitter and other social media platforms featured intriguing reactions to the game. Yusuf Kaplan, a columnist for pro-government Yeni Safak daily tweeted, “Now a Pokemon terror wind is blowing everywhere. What is this? The Japanese turning their culture into a whore of capitalism.”

Basaksehir municipality of Istanbul, known for its conservative residents, welcomed further attention due to the game and tweeted, “Good morning Basaksehir! We invite those who want to capture Squirtle [name of a Pokemon character] to our municipality.”

Making a reference to the trending topic of giving citizenship status to Syrians, a user tweeted, “It is on the agenda to give citizenship to Pokemon.”

However, not all reactions were amusing. Pokemon cartoons were quite popular in Turkey until they were banned in the early 2000s. When a 4-year-old jumped from a window trying to fly like Pokemon, the Turkish High Board of Radio and Television decided to ban further episodes of the TV program. In this context, the Zaytung TV network — similar to The Onion, a farcical US newspaper — posted a satirical piece titled “Turkey awaits the first idiot to die while playing Pokemon Go.” The piece ridiculed several sensitive matters for current Turkish society: “Given the hundreds who have taken to the streets focused on playing the game, we hold our breath waiting for the first player to die. Given our history a decade ago with Pokémon [a child jumping from a window], it is only a matter of time.”

On July 13, a group of Pokemon fans initiated an online campaign collecting signatures to advocate lifting the ban on Pokemon cartoons.

Large crowds going out into the streets concerns some in Turkey. Ulke TV, a pro-government channel, broadcast a discussion program where the presenter highlighted "the dangers of Pokemon Go” and how it could generate another mass protest such as the one at Gezi Park in 2013.

Al-Monitor interviewed over 20 Pokemon Go players in the heart of Ankara, and none of them were interested in letting go of their mobile devices for a political protest. Omer, a student of economics at Ankara University, who only gave his first name, told Al-Monitor, “Pokemon Go takes us gamers out of our isolated habitats. We are now out in the sunlight, we gather in public squares, we talk and we signal each other about the locations of different Pokemon. We are in our own virtual way socializing. Is this a danger for the government? I do not see that. I think the Turkish government will find a way to make a financial profit out of us. We need charging stations because the game drains the batteries of our phones fast. I can see the Ankara municipality will make us pay for the service of recharging our batteries.”

Indeed, given the high demand for gaming in Turkey, the government may attempt to turn this into a lucrative source of income.

In the meantime, the gamers visit different landmarks in their cities, and it turns out that mosques are a popular spot for the Pokemon characters to hide. This has led several gamers to roam around mosques to hunt down the Pokemon, which has upset the Religious Affairs Directorate (Diyanet). So much in fact that Chairman of the Diyanet Workers Syndicate (Diyanet-Sen) Mehmet Bayraktutar asked for the game to be banned around the vicinity of mosques. Bayraktutar argued that to portray mosques as places for commercial activities is a scenario of the West against the Muslim world. He said, “I denounce this game and ask for it to be banned. This is degrading our holy places and mocking Islam.”

Others have also addressed Pokemon being hunted in mosques. For instance, professor of theology Abdulaziz Bayindir argued that although it is acceptable to have some social activities in mosques, searching for Pokemon is a waste of time, which is a serious concern. Bayindir said these sorts of activities should not be allowed.

So is Pokemon Go a project against Islam? Is it a waste of time? Are Pokemon Go players secret agents to initiate another Gezi protest against the Turkish government?While those who do not approve of the game ponder about these questions, the gamers are trying to excel in their skills to walk, cycle, learn different landmarks in their cities, and collaborate with others as part of a team.

How a global phenomenon became such a national sore spot for Turkey is a question left for the rest of us.