What Turkey fails to understand about IS

Conspiracy theories keep Turkey’s new ruling class in a bubble of self-delusion, blinding them to the bitter and complex realities that Turkey faces. 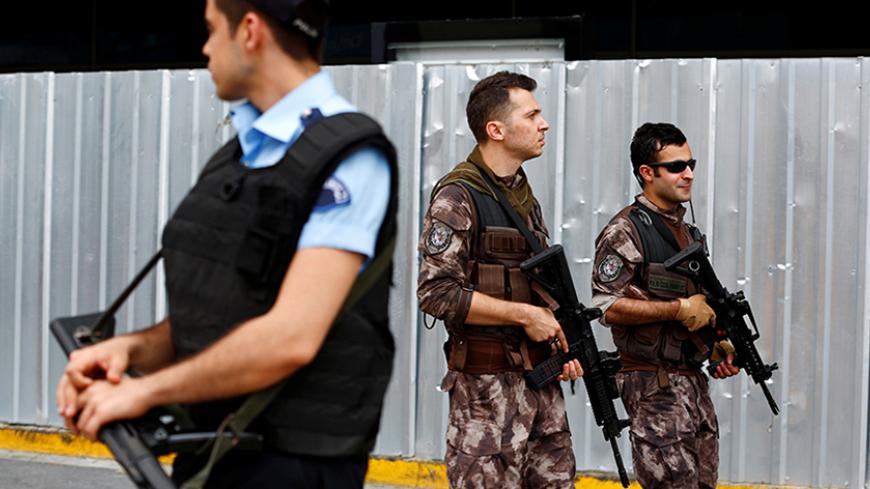 Since the deadly attack June 28 on Istanbul Ataturk Airport, Turkey has become more alert about threats from the Islamic State (IS). Turkish police arrested more than 20 suspected IS members in a search for the group's secret cells; meanwhile, the Turkish military began hitting IS targets inside Syria with its jets and artillery. In other words, as belated as it is, Turkey has begun taking a bolder stance against the terror organization that now threatens the world.

However, Turkey also needs a war of ideas against IS. Sadly, Turkey’s ruling religious-minded class seems to have little willingness and potential to do that. The reason is not any love affair with IS or any sympathy with its carnage. The reason is that most of Turkey’s Islamic opinion leaders who have the means to counter IS ideology instead choose to blind themselves to the nature of the problem and explain it as a Western conspiracy against Islam.

This tirade is most visible in the pro-government media sector, which reflects a large part of the Islamic camp. As explained in a recent Al-Monitor piece, several articles appeared in this sector after the attack on the Istanbul airport, putting the blame on “the CIA.” Moreover, there is a whole narrative explaining the very rise of IS as nothing but a Western plot to create a Trojan horse within Islam in order to stain the religion and advance Western imperialism in the Middle East.

A recent gem reflecting this narrative is a new book titled “DAISH: The Code of World War Three.” (DAISH is the Arabic acronym for the “Islamic State of Iraq and Sham” and is conspicuously preferred by Erdogan and his supporters to eliminate any visible reference to Islam.) The book is written by Betul Soysal Bozdogan, a popular female anchor on state TV TRT, with interviews with some 19 academics — most of whom are unmistakably pro-government. It was promoted with heavy advertising including a slick video, which states the following:

“The globalization project collapsed. Capitalism is on the brink of death. … While the darkness of nihilism [dominates] the whole world, Islam is the last free citadel that offers a global resistance. Hence the mastermind created its latest invention to conquer the citadel: DAISH, which wants to bring Islam and terror together.”

So IS and all of its cruelty exists because of the evil mastermind — a term Erdogan invented last year, as I explained in Al-Monitor, as a Western center of conspiracy. Moreover, the book’s promotion film tells us, the target of this conspiracy is not just Islam but, more specifically, the glorious “New Turkey” of Erdogan. The film states, “DAISH has a second mission: to stop Turkey, which is the candidate to be the ‘reference country of history and civilization.’ Since they know that we will once again shape history if the roadblocks are eliminated, they want to render both Turkey and Islam ineffective by pointing to DAISH.”

The breathtakingly self-serving tone of this argument apparently did not look too kitsch to the pro-Erdogan media. Quite the contrary, it has been welcomed and applauded. An article in the pro-Erdogan daily Sabah defined the book as a must-read for politicians and intellectuals. Other op-eds in the same media zone declared “DAISH is a product of the West” or “DAISH is a puppet, the West is the puppeteer.” Last year, even a government minister had argued, “DAISH and PKK are the West’s toys.”

The big problem now with this entire obsession with Western conspiracies is not that it looks ridiculous to anyone who has a better sense of the world. The big problem is that it keeps Turkey’s new ruling class in a bubble of self-delusion, blinding them to the bitter and complex realities that Turkey faces. They seem to have almost no idea about the religious ideology of IS and its brand of Salafi-takfiri-jihadism, or of the social and political dynamics that drive thousands of young Muslims to this zealotry.

Meanwhile, in the real world, IS has been making alarming inroads into Turkish society — and not because of any Western conspiracy, but because of the Turkish blindness in question. As explained by Yusuf Muftuoglu, a former adviser to former President Abdullah Gul, in an incomparably sober and sobering piece, Turkey has witnessed “a normalization of Salafi extremism” in the past five years, giving IS a fertile ground.

Muftuoglu said, “Some of Turkey’s Islamist NGOs and media have assumed prominent roles in this process, not just proselytizing an extremely sectarian discourse, but also silencing anyone who warned against the Islamic State. A great deal of Iran, and hence Shiite, bashing has gone on, labeling the Shiites with insulting adjectives throughout, justified by the argument that Salafi extremism was a result of Shiite extremism and hence understandable.”

Now the same people who helped advance "Salafi extremism" — “the government-allied media and its many columnists,” as Muftuoglu puts it — are telling us that its ultimate product, IS, is nothing but a Western conspiracy. Moreover, when their ideas are objected to, they typically lash out by blaming their critics to be Western agents trying to whitewash their supposed masters.

Yet the issue is not the West here, which indeed has many relevant sins of its own to account for, such as the 2003 invasion and subsequent occupation of Iraq — which is now widely accepted as a disastrous folly. The real issue is whether the members of Turkey’s new ruling class have the intellectual capacity to understand the world as it is and the moral capacity to admit their own failures along with the problems in their own tradition. So far, they have not done an impressive job. Understanding that IS is not a conspiracy against Islam but a disease within Islam would be a great step forward.