Why these Tunisian border towns have become IS recruitment hotspots

The trying economic situations in Tunisia’s border towns have pushed some of their young residents to join terrorist networks, while others seek illegal immigration via the sea to Europe. 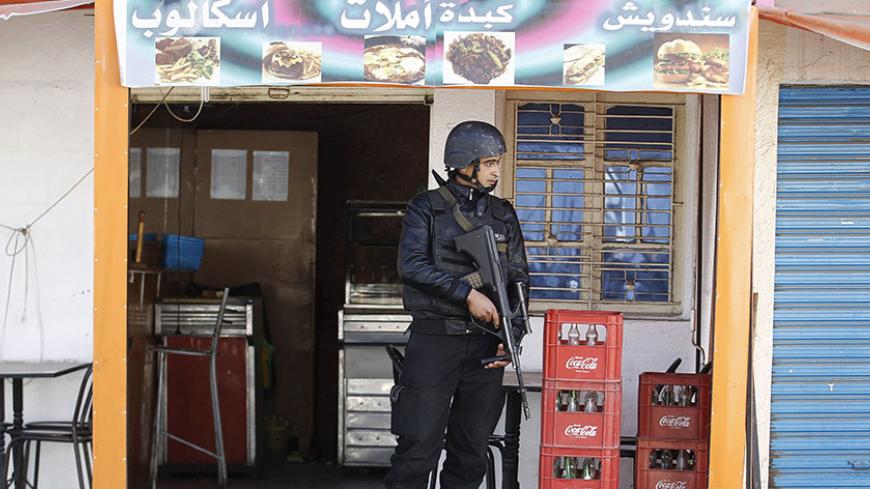 A Tunisian police officer stands guard near a police station after an attack by Islamic State militants on army and police barracks in the town of Ben Guerdane, Tunisia, near the Libyan border, March 8, 2016. - REUTERS/Zoubeir Souissi

Tunisian Mabrook Zaytooni’s family spent Eid al-Fitr hoping to find the body of their son who died in the Mediterranean Sea. Mabrook, just 25, drowned with at least 13 others attempting to sail to Italy. The boat, which had 28 passengers on board, sank as soon as it left the coast of the Libyan city of Sabratha on July 3.

All the passengers were from the city of Ben Guerdane, located far south on the border with Libya, where an attack left dozens dead and wounded in March. The perpetrators were militants with the Islamic State (IS), which wants to establish an emirate in the city. A large number of the IS members who participated in the attack were residents of the city.

In Ben Guerdane, a small city that enjoys a strategic position and serves as a gateway between Tunisia, Libya and the Sahara's Mediterranean coast, the young residents are falling prey to jihadist recruitment and illegal immigration. The town’s proximity to Libya may have made it more vulnerable to these highly active networks amid the security chaos plaguing the country.

Hussein Zaytooni, Mabrook's older brother, told Al-Monitor that they were “born to a poor, big family." He said that their "father is a per diem worker who has a basic educational level and no stable income. Being unemployed, these tough economic times led [Mabrook] to opt for emigration to Europe with no prospects of getting a job.”

He said his family does not care much for politics, but they know, just like everyone else in the city, that “the state is neglecting their rights as thousands of citizens are suffering from permanent unemployment amid no work prospects.”

Although it overlooks the sea, Ben Guerdane depends on the trade carried out through the land crossing between Tunisia and Libya. From the early morning hours, men from the city stand in long queues at the crossing to have their passports stamped and cross to the Libyan side to buy some goods and electronics, which they then sell individually or to wholesalers when they return to Tunisia.

Sharif Zaytooni, a journalist who lives in the city and a relative of Mabrook, told Al-Monitor, “Most of these men work for businessmen and are paid at the end of each day for transporting these goods. These fees are low when considering the harassment that workers are exposed to in Libya, where some of them get kidnapped or are ill-treated at the hands of armed groups there," Nevertheless, he said, "Each time the border crossing is closed, residents of the city stage protests and strikes.”

Zaytooni said, “The absence of job opportunities has made bilateral trade with Libya the only source of livelihood. The solutions that the youth are looking for are nowhere to be found at the moment. Therefore, the state must shoulder its responsibilities.”

For his part, Radwan Azlook, the local coordinator of a trade union that organizes unemployed university graduates, estimated the number of unemployed residents at more than 3,000 in a city of fewer than 79,000 people.

Azlook told Al-Monitor that the organization “made proposals to the authorities to solve the unemployment crisis in the city," explaining, "Among these proposals is the imposition of taxes on goods and people at border crossings that could be allocated to the creation of jobs for young people, the establishment of a port for the city and the creation of a free trade zone with Libya, which will create greater economic opportunities for young people.”

Azlook went on, “The number of unemployed youth with no university degrees is much larger than that of the holders of university degrees. Although there are always exceptions, this [large group] is more likely to join jihadist groups or opt for illegal migration.”

Omar el-Kouz, the head of the local authority in Ben Guerdane, told Al-Monitor, “The state is not systematically marginalizing border areas. On the contrary, the state views these areas as outposts that protect the nation from hazards. We recently witnessed the inspiring performance of the Ben Guerdane population in the face of the IS terrorist attack of March, when they supported government forces.”

He added, “The state has recently designed development programs for interior and border areas in a bid to create jobs, support investment and encourage the youth to start small- and medium-sized projects. In Ben Guerdane specifically, there is an inclination on the part of official agencies to diversify production activities in the city and not just rely on trade with the Libyan neighbors.”

This situation in Ben Guerdane is not much different from other neighboring border towns. In Tataouine, young people are suffering in the same conditions. This city has the highest unemployment rate in the country, with 37% of its residents unemployed, despite oil-rich Tataouine's status as a major contributor to the country's budget. As a result, many citizens have chosen illegal immigration or joined jihadist groups. Some unlucky few have fallen into both traps.

To the south of Tataouine, there is Remada, where the situation is no different. This city has been a major center of recruitment for IS’ Libyan branch, and the Tunisian authorities have dismantled a number of jihadist cells there.

While there are other psychological, cultural and religious motivations that prompt Tunisian youths to join the ranks of jihadist groups or illegally immigrate, economic motives remain the most prominent. Had they had job opportunities, many citizens would not take such troubled paths that so often lead to death.