Lobbying 2016: Sahara activists running out of patience with Washington 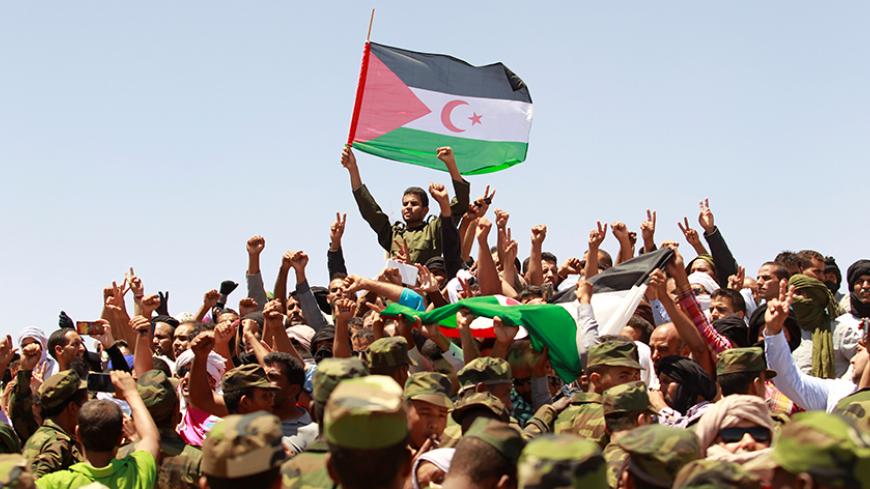 For 25 years, Western Sahara activists have been patiently — and peacefully — waiting for the United Nations and the West to help secure their dreams of independence.

That may be about to change.

Following Morocco's expulsion of UN peacekeepers in March and the death of longtime Polisario Front leader Mohamed Abdelaziz at the end of May, the independence movement is warning that violence could once again flare up. Sahrawis since 1991 have put their faith in a UN mission to secure a vote on independence after 16 years of war, but patience is running out as the international community increasingly acquiesces to Rabat's de facto control over what some deem "the last colony in Africa."

"The [1991] cease-fire and the referendum were part of a package. If there is no referendum, there should be no cease-fire," Mouloud Said, the Polisario-backed Sahrawi Arab Democratic Republic's envoy to the United States, told Al-Monitor soon after Abdelaziz's funeral. "When it comes to hostilities, it's not in our hands. It's in the hands of the international community. If they fulfil their commitment, and they give a chance to the people of Western Sahara to choose freely their destiny, there'll be no fight. But if we see that the international community — or Morocco — is still intransigent … in that case, I think the resumption of hostilities will be the natural result."

Said has represented the Sahrawi Republic in Washington since 1989, save for a brief period from 2012 through 2015. The partially recognized state controls a thin strip of the disputed Western Sahara and has diplomatic relations with 40 nations, but not the United States.

Since 2008, the Sahrawis have also relied on the New York-based nonprofit advisory firm Independent Diplomat to help with diplomatic efforts at the UN Security Council. The firm reported scattered meetings with advisers to the US Mission to the UN in recent months, and helped organize a "discussion" with Foreign Affairs Minister Mohamed Salem Ould Salek on Oct. 8 at its headquarters in New York; the firm was paid about $20,000 last year.

The Polisario gets an assist from its longtime ally Algeria, which spends $420,000 lobbying Washington every year, mostly on the Western Sahara issue. Those sums are dwarfed by Rabat, which spent almost 10 times as much last year to convince Congress and the Obama administration that its plans for an autonomous Western Sahara under Moroccan sovereignty make the most sense.

The past few months have been a decidedly mixed bag for the Sahrawis, with reversals at the UN and in Washington even as the world community continues to pay lip service to the notion of independence. MINURSO’s name remains unchanged — the French acronym stands for United Nations Mission for the Referendum in Western Sahara — but since 2003 reauthorizations have called instead for a “mutually acceptable political solution.”

Things got off to a rough start in March, when Rabat expelled UN peacekeepers after Secretary-General Ban Ki-moon decried Morocco’s “occupation” of the Sahara. The UN Security Council reauthorized the mission for a year the following month, but without demanding that Morocco rescind the expulsions or immediately return the mission to “full functionality.”

The US House of Representatives for its part has sided squarely with Morocco for many years, with a few rare exceptions.

House appropriators released a draft spending bill in late June that calls for a census of Sahrawis in Algeria’s Tindouf refugee camps. The census is a longtime priority for Morocco, which argues that the Polisario — and its Algerian backers — inflate the refugee numbers both to get more international aid and to exaggerate the urgency of a referendum.

International pressure for a precise count has been steadily growing. European officials in particular have been increasingly vocal about the need for a census since the release last year of a blistering report by the EU’s fraud watchdog accusing Algerian and Polisario officials of embezzling vast quantities of European humanitarian aid over many years.

The Senate bill, by contrast, makes no mention of a census. And unlike last year’s bill, it treats the Western Sahara as distinct from Morocco when categorizing recipients of US aid.

For the past two years, US lawmakers have used their power of the purse to demand that US foreign aid to Morocco be made available for projects in the Western Sahara, a de facto recognition of the legitimacy of Rabat’s rule over the phosphate-rich territory. The State Department on April 7 awarded a $1 million grant to the International Republican Institute to support “participatory governance” in the western 85% of the region that is under Moroccan control.

The grant has been criticized by some Sahrawi activists. But it also falls short of pro-Moroccan lawmakers’ push for greater US economic investment in the territory.

“This sort of program is very welcome once we find a solution to the conflict. But this is not the right moment,” Said told Al-Monitor. “It’s not a good idea because the real Sahrawi civil society is not going to be a part of it. They understand that this is a game by Moroccans to try to legitimize their occupation by getting the United States involved through what appears to be an innocent and genuine program — which is everything but genuine or innocent.”

In announcing the grant, the State Department also made clear that the grant “does not reflect a change” in the Obama administration’s policy of supporting a “peaceful, sustainable and mutually agreed solution to the conflict.” Those assurances were shared in a letter to veteran Rep. Joe Pitts, R-Pa., a longtime Sahrawi champion and co-chairman of both the Western Sahara congressional Caucus and the Tom Lantos Human Rights Commission.

In March, the commission held its first hearing in a decade on the issue of Morocco’s human-rights record in the Western Sahara. Morocco has also continued to come under criticism by the State Department for its treatment of independence advocates, infuriating Rabat.