As partisan bickering costs the Palestinian cause momentum in the regional and international arenas, the Palestinian National Initiative hopes a new strategy will unify the political leadership and end the division. 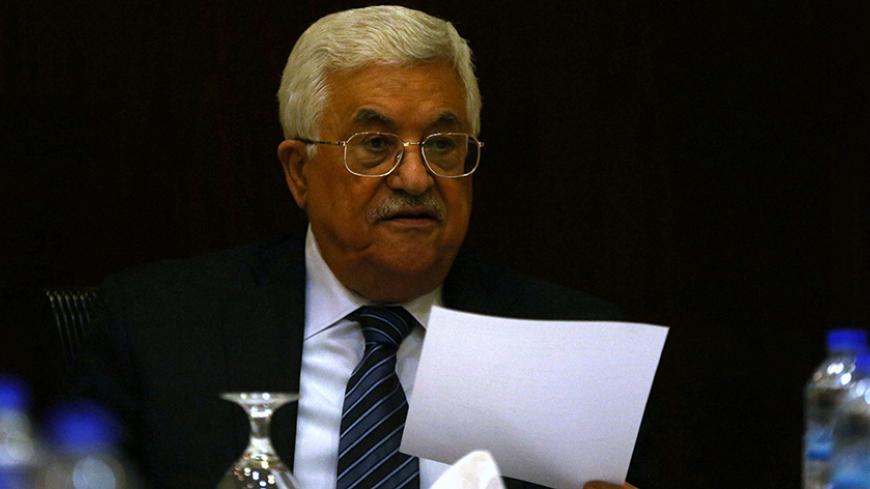 RAMALLAH, West Bank — The Palestinian cause has been at a standstill for several years now. More than 22 years after the 1993 Oslo Accord, Palestinians are still unable to establish a state of their own within the 1967 borders, and peace remains elusive as Israel continues to build settlements on the West Bank. The two-state solution seems impossible. Negotiations are at a standstill with the Israeli government rejecting international proposals such as the French and Arab initiatives to end the occupation.

Facing this political situation, Palestinians are calling upon the leadership to change its political strategy. In this context, on June 22, the Palestinian National Initiative proposed the National Alternative Strategy to Achieve Freedom aimed at changing the balance of power in favor of the Palestinian people.

The document, which Al-Monitor reviewed, is built on five pillars. The first pillar is peaceful popular resistance activities, including protests against the separation wall and settlement activities in Bilin and Kafr Qaddum, a local boycott of Israel, the undermining of Israeli interests and normalization activities and finding local alternatives for the main services and products imported from Israel, such as fuel and electricity.

The second pillar is exemplified by the campaign of boycotts, divestment and sanctions against Israel. The third pillar supports so-called "national resilience," which calls for changing economic policies so that Palestinians can develop and thrive on their land.

The fourth pillar is national unity and a unified national leadership, which means the formation of an inclusive framework in which all factions can voice their opinion and take part in any decision at the national level.

The last pillar is the integration of the all the Palestinian components of the West Bank, Gaza, Jerusalem, the diaspora and the occupied territories, who are to unite their efforts under one national political leadership to create a common political program.

The secretary-general of the Palestinian National Initiative, Mustafa Barghouti, told Al-Monitor that the national strategy requires the formation of a unified national leadership to end the differences between Fatah and Hamas, and involves giving priority to the public interest amid the difficult political circumstances plaguing the Palestinian cause.

“Having a unified national leadership that includes all of the factions within the framework of the Palestine Liberation Organization is one of the most important conditions and requirements needed to put an end to the Palestinian division,” Barghouti added.

According to Barghouti, the strategy put forward is the result of political consultations conducted by the Palestinian National Initiative with the Palestinian factions and popular groups and movements, such as popular resistance committees in towns and villages, since the latest popular uprising began in October last year. The strategy will be presented to the PLO factions and members of the PLO’s Executive Committee, and could be amended should these should these choose to adopt it as a political strategy.

The PLO is the unified national leadership and sole legitimate representative of the Palestinian people. However, given its fading political role and its inability to compel the Palestinian Authority to implement its decisions — as some decisions at the PLO’s Executive Committee are made unilaterally by President Mahmoud Abbas without reaching consensus with other Palestinian factions — as well as its exclusion of Hamas and the Islamic Jihad, the PLO needs empowerment based on the Beach Refugee Camp Agreement signed by the Palestinian factions in al-Shati refugee camp in the Gaza Strip in 2014. This agreement resulted in the formation of the PLO’s unified leadership framework.

The role of the PLO has been undermined by its main entities' not fulfilling their missions and its members' not being re-elected in accordance with the PLO’s bylaws. This is the case, for example, of the Palestinian National Council, which is the supreme authority of the PLO and drafts the PLO’s policy, plans and programs.

The limited capabilities of the PLO are due to the failure to reach a final reconciliation agreement between Fatah and Hamas, the last developments related thereto being the December 2015 talks in Doha. The latest round of these talks, held June 29, was doomed to failure when Hamas and Fatah exchanged accusations of renouncing and breaching earlier agreements on various issues.

Wassel Abu Yousef, a member of the PLO’s Executive Committee, told Al-Monitor, “The Executive Committee must develop and adopt an inclusive national strategy in light of the significant risks and challenges facing the Palestinian situation.”

He said that any national strategy should be based on three pillars. He said, “The first pillar consists of fixing the domestic Palestinian situation in order to put an end to division and restore national unity and activating the resistance against the occupation. The second pillar is to continue to work with the international community after bilateral negotiations end, and to internationalize the Palestinian cause at international institutions such as the UN Security Council, the General Assembly and the UN Human Rights Council. The third pillar aims to completely boycott and isolate Israel using all of the domestic boycott tools and mechanisms along with the procedures for the trial of Israel before the International Criminal Court.”

Abu Yousef declined to discuss the formation of a unified national leadership, saying, “The PLO is the leadership unifying the Palestinian people despite the fact that some factions are not represented in it.” He added, “We are trying to bring all factions into the PLO institutions, and what we need is a national field leadership, not a political leadership, because this one exists and is consensual.”

For his part, writer and political analyst Ahmed Rafik Awad told Al-Monitor, “The call to adopt a new political strategy with a new mentality and new tools is essential and very correct, considering that the old political track, with all of its tools and members, failed over the past 22 years. This requires the rehabilitation of the PLO and the empowerment of its roles and members.”

Despite the need to adopt this strategy, the current leadership of the PLO, where Abbas monopolizes the decision-making process, is not ready to make changes to the structure or political strategy of that organization.

Awad said, “The Palestinian political system is not ready to adopt any new strategy or bring about any change at the level of the leadership due to division, to personal and partisan interests, to the lack of effective leaders capable of bringing about that change and to the absence of popular oversight.”

In turn, Barghouti said, “Yes, there is difficulty in adopting this strategy and bringing about change. But this is not impossible, especially as the Palestinian parties are starting to be convinced that this step is our only way out, and that the Palestinian cause can only be resolved by uniting our energies and efforts and adopting the ideas that we put forward.”