Will upcoming local elections unite Palestinians, or divide them even further?

The Palestinian Authority has announced a date for local elections to be held in Gaza and the West Bank, but Hamas is reluctant to sign onto an electoral process it suspects will marginalize it. 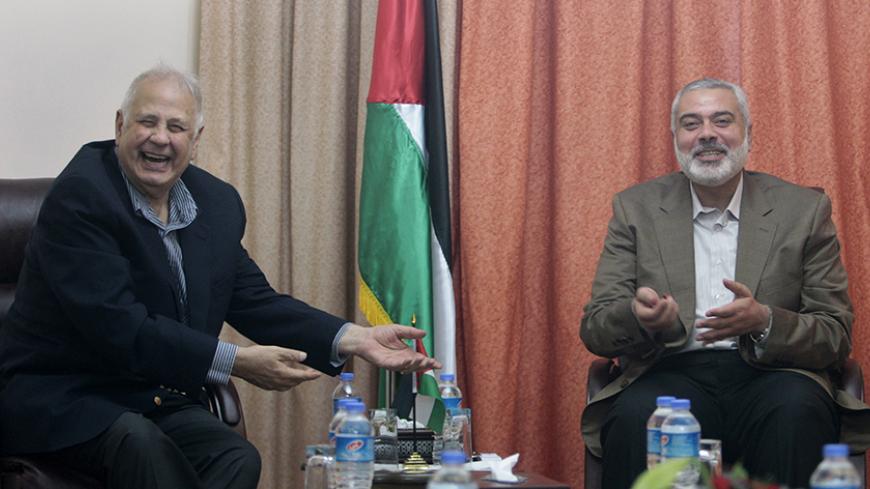 The Palestinian government has set a date for local elections in the West Bank and the Gaza Strip. The elections, which will include 414 local bodies, will be held Oct. 8, according to a June 21 announcement.

According to the Palestinian Central Elections Commission, a local body is a local government unit within a specific administrative geographic area, the borders of which are based upon official maps recognized by the Ministry of Local Government.

Under the Palestinian Local Elections Law of 2005, there should be enough candidates on each electoral list to fill a majority of the seats allocated to the electoral district. The candidates list shall be considered closed, and the names of the candidates appear in order of priority.

On June 23, the Central Election Commission released the official timeline for the local election process, starting with registration, announcement and vetting of candidacy and publicity before the voting itself and the announcement of the final results.

The Palestinian local elections include large local bodies in cities as well as small local bodies that manage affairs in towns and villages such as water services, markets and building permits. The size of local bodies varies with the changing Palestinian population, and some towns may wish to have their own councils out of fear of being neglected by large cities. These elections are held by agreement with the Ministry of Local Government affiliated with the Palestinian Authority.

Yousef Rizqa, who served as information minister in the 2006 Hamas government, told Al-Monitor, “The Palestinian government in Ramallah did not discuss with Hamas in Gaza the necessary conditions for holding local elections, such as transparency, campaigning, electoral courts, appeal mechanisms, and the condition of holding elections in the West Bank and Gaza simultaneously, free from the influence of the Palestinian security apparatuses in the West Bank and their shameful interventions. In this context, during the Birzeit University elections back in April, the Palestinian security services arrested a number of Hamas-affiliated students.”

Rizqa added, “However, Hamas would participate in the local elections once the conditions for fairness and the needs of a democratic process are available. Hamas might participate in these elections by teaming up with political and civil society organizations. This time, Hamas’ participation will not be the same as in 2005, when it entered the local and legislative elections with its own Change and Reform list.”

Some claimed that the Palestinian local elections that took place in 2004-2005, the first electoral experience for the local bodies, were compromised by the authorities' inability to properly monitor all the polling places in the Palestinian territories.

Those elections were the first to include Hamas since the formation of the PA in 1993. The movement won in most districts, particularly in the local bodies in the Gaza Strip. Hamas won a majority in 34 out of 68 local bodies in the West Bank and four out of seven in the Gaza Strip. But after the movement took over the Strip in June 2007, it appointed members to the rest, taking control of most of Gaza’s local bodies. This situation begs the question of whether Hamas would approve and allow the holding of the elections in Gaza, or if it will participate in them. Meanwhile, the Palestinian street is torn between expressing its satisfaction with the local bodies’ performance and protesting the quality of some of their services.

Many problems have been plaguing local bodies in the Gaza Strip: Israel has been preventing the entry of raw materials needed for infrastructure projects under the pretext that such materials can be used by Palestinian factions for military purposes. Israel has also been preventing the entry of machinery, equipment and parts needed for sanitation projects.

In addition, the consensus government in Ramallah has yet to provide the operating budgets for local bodies in Gaza.

Speaking to Al-Monitor, Faisal Abu Shahla, a member of Fatah’s Revolutionary Council in Gaza, urged Hamas “not to disrupt local elections in Gaza, since not holding local elections denies the Palestinians’ right to vote." He said, "Hamas has to hold the elections and respect democracy so Palestinians are able to express their opinions. Hamas does not have the right to disrupt the elections in Gaza for partisan reasons or refuse to participate in the West Bank elections under the pretext of a lack of integrity.”

However, Hamas has yet to announce its official position on the local elections. Perhaps it is still undecided. Different positions expressed by some of its leaders indicate that the debate within the movement is ongoing.

For his part, Ismail al-Ashqar, a Hamas leader and the head of the security committee in the Palestinian Legislative Council, said June 25 that any local elections without a national consensus are unacceptable.

On June 26, Hamas’ official spokesman Sami Abu Zuhri criticized the government's announcement before a national consensus was reached to prepare to hold elections. He also revealed that Hamas had submitted questions to the Central Election Commission to which the movement is still awaiting answers before announcing its final position.

According to a May poll conducted by the Center for Opinion Polls and Survey Studies at an-Najah National University in the West Bank, more than 75% of Palestinians in the Gaza Strip and the West Bank desire to participate in local elections, should they be held.

Omar Shaban, head of PalThink for Strategic Studies in Gaza, told Al-Monitor, “The unification of the elections in Gaza and the West Bank is essential for Palestinian reconciliation. I have met with some Hamas officials in Gaza and they did not have any positive answers about participating, as they demand that local, legislative and presidential elections be held as one package. But the PA in the West Bank does not agree, and this is why the chances of holding the elections in Gaza are slim.”

Shaban added, “Meanwhile in the West Bank, Hamas could boycott the elections for security reasons, as it fears the Palestinian security services would crack down on it. Nonetheless, if [Hamas] decides not to participate or disrupt the elections [in Gaza], Palestinians would be disappointed, as it would widen the gap between the [West Bank authorities] and Hamas-controlled local bodies in Gaza.”

Nearly 100 days separate us from the October elections, sufficient time for Hamas to carefully make its final decision. Hamas may be aware that if it approves the elections, the chances of reconciliation with Fatah will increase, and the financial and administrative burdens on the local bodies it controls will decrease.

But if Hamas refuses to participate because the Palestinian government did not consult with it before issuing its decision to set a date, the existing division in the Palestinian street will deepen further.