To address the heavy traffic and disorganized public transportation in Lebanon, a small team of volunteers is working to create an interactive bus map and encourage commuters to take advantage of the redeveloping services. 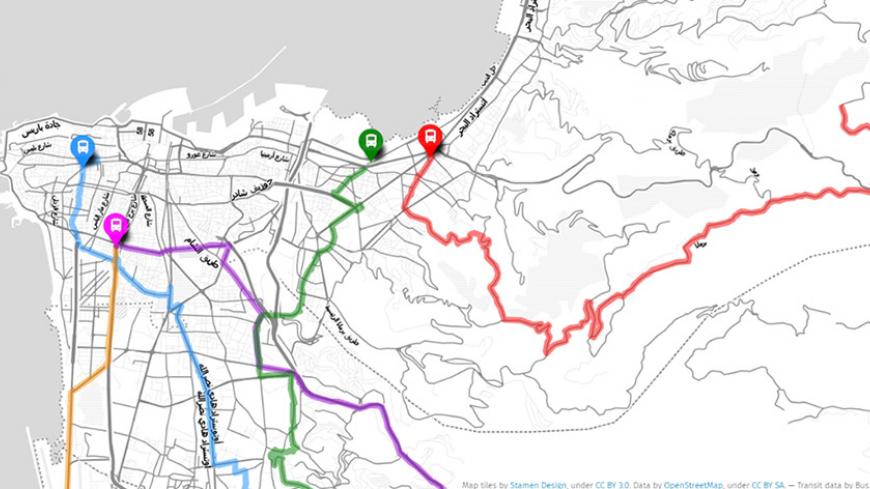 On Lebanese roads, traffic is a daily issue, raising commuters' stress levels during both rush hour and quieter periods. However, few would give up their cars to use a bus to get around. Among other factors, the buses' routes are not clear or widely understood. But today, a small group of volunteers is working to map these routes through collective action.

According to Executive Magazine, “Lebanon used to have the most advanced transport system in the Middle East, with trams, buses and trains accompanying the rise of the personal automobile,” but the civil war from 1975 to 1990 “laid waste to this sophisticated transport network.” Today, public transportation in Lebanon is confusing and unregulated, and little formal research has been done on the issue.

According to a study led by urban planner Petra Samaha during her studies at the American University of Beirut, around 80% of daily trips in the Beirut and Greater Beirut areas today are made in private cars, and less than 2% in buses. “There is a general idea that public transportation is not reliable and that it's only for poor people,” Samaha told Al-Monitor.

“People think that it wouldn't be profitable to develop a public transportation system, but it's not true. It brings a better level of life and jobs,” she added.

Her analysis is based on her study of Van No. 4, which follows the path of the Green Line that separated eastern Beirut from the west during the civil war. Going all the way from Hay el-Salloum in Beirut's southern suburbs to Hamra in western Beirut, crossing on its way Mar Mikhael Church, Sodeco and downtown Beirut, the van makes the whole trip for the small fee of 1,000 Lebanese pounds ($0.66).

“I found out that both drivers and riders were satisfied: The drivers are able to earn $70 a day if they rent the vehicle and $200 if they own it,” Samaha said.

She explained, “Van 4 used to be owned by the Lebanese Commuting Company in the 1990s, but a family from Hay el-Salloum took over the line to give jobs to people from the neighborhood. It is now a functional system that we could learn from in developing a collective transportation system.”

Buses in Lebanon are either state-owned or private. In the latter case, drivers rent vehicles destined for public transportation from private companies.

Van 4 is well known in Beirut by students, workers and tourists, but there is still no map of its route. Soon, however, maps of this one and other lines in Greater Beirut and in the rest of the country will become available through the growing initiative of the Bus Map Project, created by bus users Jad Baaklini and Chadi Faraj with the help of graphic designer Sergej Schellen and other volunteers.

“In 2009, I realized that there was something wrong with being stuck in traffic all the time. So I went to see if any nongovernmental organizations were working on the issue and attended events,” Baaklini, a communication consultant, told Al-Monitor.

“But our discussions on public transportation were only from an engineering perspective, not from that of the riders. I made a research project on my own, which led me to the Bus Stops Project, developed within the framework of Rotary International's youth projects last year. And I realized we need to map the buses' routes and develop an interactive tool that would help bus riders to move around more easily,” he said.

In 2008, Faraj, a software developer, had already developed an application on his own, “But no one approached him at the time,” said Baaklini. “Therefore, we began our project last July, with the aim of raising awareness of existing transit options by mapping van and bus routes.”

Faraj and Baaklini are publicly launching the initiative on July 15 through an event in partnership with the social media platform and photography tool FRAME, hosting a mass documentation day in which amateur and professional photographers will use the first draft of their map to explore the bus system of Beirut and its surroundings. “We hope that it will push people to give us feedback to fix the map, but also spread a positive image of collective transportation in Lebanon,” Baaklini added. “The mapping tool is just an opening for a needed change in activism. We need to advocate from the point of view of a bus rider.” Therefore, they are in the process of registering their own NGO, the Riders Ride Association.

Another regular bus user and volunteer with the Bus Map Project, Dounia Salame, told Al-Monitor, “As a geographer, I got interested in the way this system came to be through self-organization and how it became quite organized with very little state regulation.” She said, “I looked at how these routes came to be what they are, how they were organized through a mix of the needs of the riders, the geography of the territory and an indirect coordination between lines.”

Salame added, “The routes obviously respond to a need that riders have in moving across the territory, but they are also constrained by certain practices that pre-date them. It is amazing how informal organizing is able to adapt so well to the needs of the users and the drivers. The routes change depending on the needs of the riders, the stops are informal and the bus drivers [coordinate to transfer clients]. But most of all, this informal system serves the most marginalized who wouldn't have access to mobility otherwise. Therefore, mapping these indispensable bus and van lines could reveal new things about the ways we see and interact with the territory.” For her, mapping is only a first step “to understand collective transportation in the territory and try to improve it.”

Salame got involved at the same time as Beirut Madinati, an independent electoral list that participated in the 2016 municipal elections. Among the list’s goals and targets is the public transportation issue in Beirut.

“Historically, Beirut was developed along an axis of public transportation systems. It followed the lines of Beirut/Saida, Beirut/Damascus and Beirut/Tripoli that formed the spines of the national territory,” Mona Fawaz, an associate professor with the American University of Beirut and a member of Beirut Madinati, told Al-Monitor. “There is no reason to think that it is not possible to redevelop these networks and more. Besides, there is an obvious need and demand for public transportation, as evidenced by the sizable population that is served by the informal networks of [shared cabs] and minivans. So if there is no effective public transportation system today, it is not because of the lack of opportunity, but the lack of political will.”